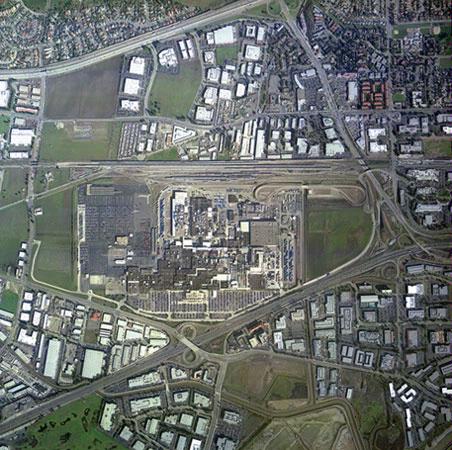 Through a partnership with Toyota, Tesla Motors plans to make electric cars at the former New United Motor Manufacturing Plant (NUMMI) in Fremont, Calif., which Toyota and GM operated for 25 years as a joint venture before its recent closure.
Photo courtesy of NUMMI

In its latest sharp turn, Tesla teams with Toyota to make its latest model of electric car in Northern California.

By Adam Bruns
"I

felt the wind … the wind of the future."

Toyota Motor Corp. President and CEO Akio Toyoda used those words in late May to describe his experience driving one of Tesla Motors Inc.'s pioneering Roadster electric vehicles. He could just as well have been describing the transitions and fortunes of his company, the California industrial economy and one particular piece of property: the nearly 208-acre (84-hectare) New United Motor Manufacturing Plant (NUMMI) in Fremont, Calif., that was founded in 1984 as a joint venture by Toyota and General Motors, and which Tesla now will purchase from the JV for US$42 million.

Thus ends a three-year saga that first had Palo Alto–based Tesla placing its plant in Albuquerque, N.M., because no financial support was offered by its home state. Once state officials began to take the hint, Tesla appeared headed instead to San Jose. Most recently it was going to the Los Angeles municipality of Downey. Downey officials, upon hearing the Fremont news, expressed astonishment and betrayal, especially given the fact they planned to have the lease signed the very next day. They said they learned of this final twist only through queries by a reporter following a May 20 press conference that featured Toyoda, Tesla CEO Elon Musk and California Gov. Arnold Schwarzenegger.

But the L.A. area is not completely bereft when it comes to electric vehicles. On April 30, Chinese hybrid and electric car company BYD Co. Ltd., famously invested in by Berkshire Hathaway, announced it would establish the U.S. headquarters of three separate operating divisions in the City of Los Angeles, thanks in part to the efforts of L.A. County Supervisor Michael D. Antonovich and Los Angeles County Economic Development Corp. President and CEO Bill Allen. Company officials estimate its new offices would create 50 to 100 jobs initially with plans to increase its work force up to 2,000 employees over the next three years.

'The DNA of Car Making'

Back in Northern California's Alameda County, Toyota intends to cooperate with Tesla in the development of electric vehicles, parts, and production system and engineering support, and has agreed to purchase $50 million of Tesla's common stock issued in a private placement to close immediately subsequent to the closing of Tesla's currently planned IPO. Together, Toyota and Tesla hope to create approximately 1,000 jobs.

"I sensed the great potential of Tesla's technology and was impressed by its dedication to monozukuri [Toyota's approach to manufacturing]," continued Toyoda. "Through this partnership, by working together with a venture business such as Tesla, Toyota would like to learn from the challenging spirit, quick decision-making, and flexibility that Tesla has.

"I myself spent time at NUMMI and learned much about working in America there," Toyoda said, "so I feel a sense of attachment toward the plant. I'm extremely happy that the DNA of car making that the NUMMI team developed over 25 years of production there will live on in an industry for the future."

GM exited the NUMMI partnership last year is it went through bankruptcy proceedings, but Toyota had helped keep the plant going until April. When it shut down, it was making Corollas and Tacoma pickups whose price tags top out at around $18,000 and $25,000, respectively. The price tag for the new Tesla Model S made there will be around $50,000, once a federal tax credit of $7,500 is applied toward its purchase price of $57,400. Tesla plans to make 20,000 a year at the plant when production gets going in 2012.

According to documents filed in late May with the Securities and Exchange Commission, Tesla agreed to pay $42 million for the NUMMI plant. But the filing also noted that the agreement with Toyota was not yet finalized. The transaction involves 5.4 million sq. ft. (501,660 sq. m.) of property at NUMMI, and is expected to close no later than October 1, 2010, with NUMMI responsible for completing the ongoing decommissioning work by that time. NUMMI was represented in the transaction by John DiDonato, a managing director at Huron Consulting Group, which frequently lends executives to companies going through workouts, reorganizations and restructurings. Musk himself signed the agreement on behalf of Tesla. At the press conference, he credited California's progressive environmental stance for providing a firm foundation for his business — a statement in direct contrast to typical corporate complaints.

"The consistent policy on environmental regulation and on emissions has been a key driver for the advancement of electric vehicles," he said, "and obviously without the governor's support and the legislature's support I don't think we would be nearly as far along as we are today."

"Our environment is very, very important, and this is why we passed certain legislation in California,," said Schwarzenegger, "if it is AB 32 [the Global Warming Solutions Act of 2006], to make a commitment to roll back our greenhouse gases, or if it is the renewable standard for renewable energy being 33 percent, or building the Hydrogen Highway, the Green Building Initiative and all of those kind of things.

"Of course, when we passed those laws we felt a certain resistance, but now more and more companies and industries are coming on board," the governor continued. "The same was with the car companies. There was resistance amongst the car manufacturers. They all sued us … But we didn't pull back, we stayed on course. In the end, I think that is really the important characteristic of California's environmental policies — that we stay on course."

Besides its innovative systems developed in Silicon Valley, Tesla will also be bringing to the site one press being shipped to the site from Michigan. It will inherit from NUMMI not only its buildings and equipment, but all applicable licenses and permits, as well as the right to purchase at a reasonable negotiated price enough VOC credits to support the manufacture of at least 100,000 vehicles per year. Best of all, Tesla will move from the multi-facility, transatlantic manufacturing model used for the Roadster to a completely integrated manufacturing complex driven by the Toyota production system.

Meanwhile, two adjacent parcels of the NUMMI land may be open to mixed-use development by other owners. And Tesla will continue the development of its combined corporate headquarters, manufacturing and R&D complex in Palo Alto.

Mather Kearney, assistant deputy director of the new Governor's Office of Economic Development, says he's been working with Tesla for over two years, continuing he work that deputy director Dave Freitas had begun.

"We started working with NUMMI and and the East Bay EDA once GM announced the potential for bankruptcy, especially since a third of production was the Pontiac Vibe," says Kearney. "Later the whole line was eliminated. Around this time last year, obviously we were trying to keep the plant open, find another partner, figure something out." That includes solutions for down-the-line suppliers. "Some of those suppliers will be able to work with Tesla," Kearney says. "Some we've been working with since August to find new customers — if they make plastic clips, can they make them for a solar panel company, for example."

Direct incentives to Tesla include a 10-percent sales tax abatement on capital equipment, which Musk estimated would come to approximately $20 million on the "couple hundred million" Tesla anticipates spending over the next few years on equipment. The incentive was a result of recently signed legislation, SB 71, to create a sales tax exemption for the purchase of green-tech manufacturing equipment in California. It expanded a sales tax exemption that applied only to zero emission vehicles.

Tesla will also make use of a $465-million loan from the U.S. Dept. of Energy, $363.9 million of which is intended for the continued development of the Model S and the build-out of the manufacturing facility. The balance of that loan will go toward developing its electric powertrain business, for sale to such companies as Daimler and others.

Best of all for California, which had a 12.5-percent unemployment rate in May, Tesla anticipates creating a bunch more jobs than the 142 it employed in manufacturing at the end of 2009.

"The NUMMI Plant is a very large plant with about a half million vehicle a year production, and Model S is initially only about a 20,000 vehicle production, so we're going to be occupying a little corner," said Musk. "But there's a lot of room for growth, and long term we certainly intend to use the full capacity of NUMMI. And although initially we're talking on the order of 1,000 jobs, long term I think it's probably closer to 10,000 jobs, with about half of that from Tesla and half from suppliers." 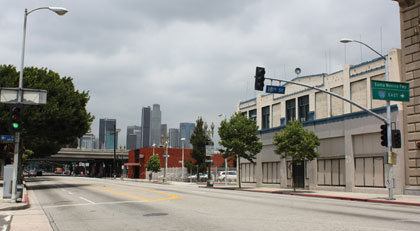 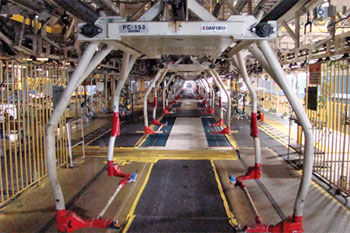 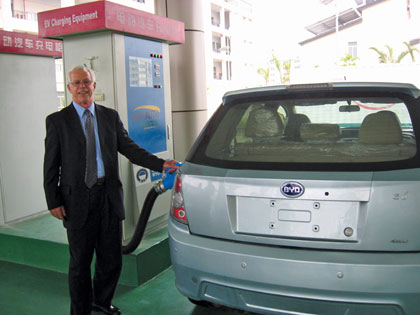