ThyssenKrupp pursues its own structural change
with a new headquarters in Germany's Rust Belt. 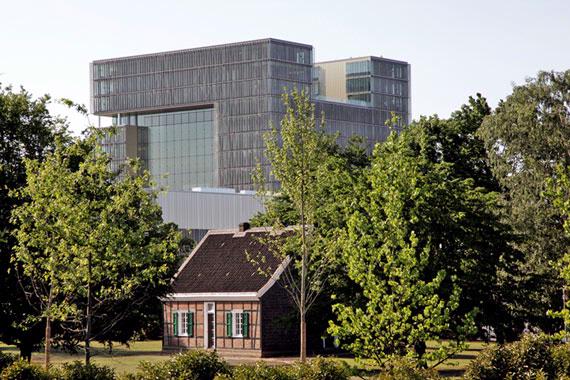 The Q1 building at ThyssenKrupp Quarter stands 538 ft. (50 m.) high, towering over the original Krupp headquarters building preserved on the site, but offering modern connectivity and amenities to the entire campus.
Photos courtesy of ThyssenKrupp
T

he German city of Essen is the Pittsburgh of North Rhine Westphalia. The 53-city Ruhr Valley in which it sits is Germany's Rust Belt, responsible for 5.7 percent of Germany's GDP. Instead of coal, steel, beer and American football, it's coal, steel, beer and fußball, as in the beloved Royal Blues of Shalke, the soccer team from Gelsenkirchen, or the Black Yellows of Borussia Dortmund, Shalke's Bundesliga rival from the former brewing capital just to the east.

But loud cheers in the stadiums belie ghostly numbers outside their confines. Employment in the Ruhr's signature industries has plummeted from 500,000 each in coal and steel and some 30,000 in brewing 50 years ago to 30,000 each in coal and steel and just 1,500 making beer. Everywhere the talk is of the region's "structural change," a European Union-flavored phrase repeated often enough to be an incantation. Even as some heavy industry endures, creative re-uses of industrial complexes populate the landscape, especially in 2010, as the Ruhrgebeit celebrated its stature as one of the EU's European Capitals of Culture.

The Ruhr has seized its moment with a frenzy of art, performances and events, as if economic transformation could be willed to life through the region's own blend of industrial light and magic. One industrial park focused on renewable energy speaks of changing its community from the "City of a Thousand Fires" to the "City of a Thousand Suns." For the most part, however, the heavy clouds of an industrial legacy remain. "Change has left huge scars," says Andreas Bröckmann, head of arts and science at the nascent Dortmund-U Center for Art and Creativity, where once stood a Union brewery. "What you see in the landscape is also in the hearts of people."

But amid the re-imagined frames and high vistas from which to wistfully gaze upon the ruins, new corporate and industrial facility projects still rise. In June 2010, ThyssenKrupp celebrated the opening in Essen of ThyssenKrupp Quarter, a new headquarters complex that consolidates administrative offices from multiple locations. More than 2,000 employees will work there.

"The Quarter stands for the dawning of a new era," said Dr. Ekkehard Schulz, executive board chairman of ThyssenKrupp AG. "It stands for internationality and modernity, for openness and cooperation, for innovation and sustainability."

The decision to build the new headquarters in Essen was made in 2006, when the company publicly pledged that it would not fence the site, keeping some portions set aside as Krupp Park. Company amenities include the ThyssenKrupp Academy, a child daycare center, two restaurants, and a "room of tranquility." Environmental attributes include geothermal heating and cooling, and a centrally controlled sunshade system comprising 400,000 individual slats. Rainwater will funnel from the roofs into Krupp Park, and thence to the Emscher River, which is in the midst of its own transformation from industrial dumping ground to livable watercourse.

The new space is as affordable as it is livable, realizing significant savings through optimal use of office space.

"Taking together the former headquarters in Düsseldorf and the locations of the former segment holding companies in Düsseldorf, Bochum and Essen, ThyssenKrupp had a total office area of 150,000 square meters [1.6 million sq. ft.]," said Ralph Labonte, member of the company's executive board, in June. "We have been using less than three quarters of this space ourselves. The centralization of the Group in Essen together with the new space management plan for the Quarter allowed us to optimize our requirements. This meant we were able to withdraw from inefficient sites. With the sale of a real estate package in 2008 which also included the headquarters in Düsseldorf, construction of the Quarter is virtually cash-neutral."

"Essen" means "eat" or "food" in German, but the city's name derives from a shorter word: "esse," meaning "smokestacks." Both meanings come together in one economic developer's description of why German steel companies Thyssen and Krupp originally merged in 1999: "They did it so Mittal would not eat them for breakfast."

Today the company's facility projects feed its own appetite for market share. The new headquarters joins a fleet of new company facilities and capacity expansions that have sprung up over the past several years, overseas in Alabama and Brazil, and at home in Duisburg and Bochum. The suite of new investments comes a decade after the company famously sold one of its blast furnaces to a Chinese steel firm, which moved it piece by piece from Dortmund to Hebei Province, China.

In September, the meltshop in the port city of Duisburg celebrated producing its 200 millionth metric ton of crude steel. And in October, the first shipment of 10,000 tons of steel slabs from the new ThyssenKrupp CSA Siderúrgica do Atlântico integrated iron and steel mill in Santa Cruz, Brazil, was unloaded at Walsum port in Duisburg after a two-and-a-half week journey across the Atlantic. The slabs were transshipped at Europoort Rotterdam and then transported by barge trains up the Rhine to Duisburg.

The Chinese today are importing their own lessons in structural change, says Michael Schwarze-Rodrian, director Location Ruhr and investor's service, noting during a November presentation that he would be welcoming a group from China the next day, then heading to the People's Republic the following week to talk to northern Chinese cities "preparing for tomorrow."

For ThyssenKrupp, tomorrow is now, and its global strategy starts at home.

"Even as a globally active technology group, we remain a company of the Ruhr," said Schulz. "This tradition is important to us. It shapes who we are and what we do — throughout the world." 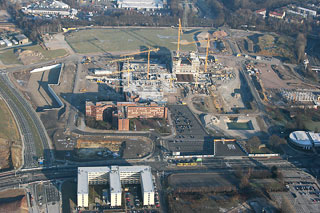 The changes wrought by the ThyssenKrupp Quarter project in Essen are evident in these photos taken in 2008  and earlier this year (next image).
Photo courtesy of ThyssenKrupp 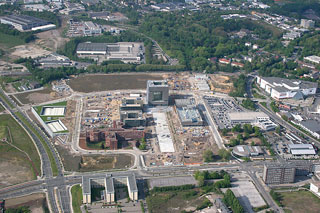 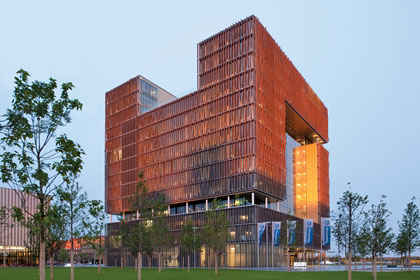 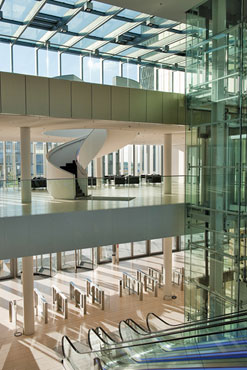