After nearly a decade of tests and obstacles, Cape Wind is on the brink of reality. 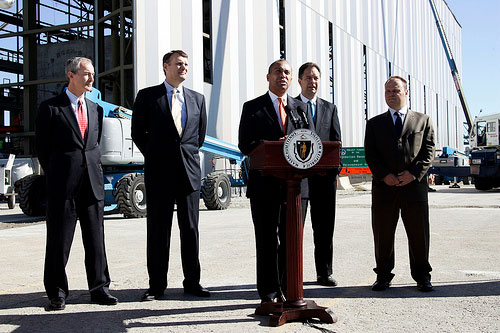 On Oct. 13, Massachusetts Gov. Deval Patrick, a proponent of Cape Wind, announced that Mass Tank Sales Corp. of Middleborough, Mass., will partner with EEW Group of Germany, one of the world's biggest manufacturers of structural parts for wind farms, to open a new plant that will make the steel pilings used to anchor Cape Wind's proposed wind turbines to the sea floor.
photo courtesy of Green Massachusetts
by Dean Barber
Y

ears ago, Timex Watches marketed its products as being able to take a licking and keep on ticking.

Supporters and management of Cape Wind Associates, a company that very well may develop the first offshore wind farm in the coastal waters of the United States, could probably identify with the Timex slogan.

"Just about everybody and their brother got in line to take a shot at this offshore project,' says Don Schjeldahl, vice president of renewable energy strategies for the Austin Company, a Cleveland-based engineering and construction firm. "But the objections have gotten checked off one at a time."

Indeed, Cape Wind is still not a done deal, but recent events would indicate the US$2-billion project to build 130 wind turbines off the coast of Massachusetts now stands a better chance after almost 10 years of review.

The Massachusetts Supreme Judicial Court on Aug. 31 ruled in favor of granting all state and local permits for the project to be built about 16 miles (26 km.) offshore in Nantucket Sound. And on Oct. 6, the U.S. Department of Interior signed a 28-year lease — the first of its kind — with Cape Wind for 25 sq. miles (65 sq. km.) of ocean space.

Plans call for the project to include 130 turbines producing an average of 182 megawatts, or enough to power more than 200,000 homes.

But more hurdles still lie ahead. Securing financing remains an issue and will be dependent upon whether the Department of Public Utilities approves a proposed contract between Cape Wind and utility National Grid. That proposed agreement, which calls for National Grid to buy half the wind farm's power, is under review by the Department of Public Utilities amid growing concerns that ratepayers, particularly industrial users, will likely face rate increases.

"This is not a good deal for industry," says Robert Rio, senior vice president of the Associated Industries of Massachusetts, who contends that companies that don't even buy power from National Grid face increased charges because of the way the contract was wrongfully structured between National Grid and Cape Wind.

Rio says AIM has filed briefs in opposition to the contract. He says AIM is prepared to take the matter to the state's supreme court if the DPU rules in favor of the contract. A decision is expected by mid-November.

In reviewing the proposed contract between National Grid and Cape Wind, the DPU will have to look at the impact on ratepayers, says George Sterzinger, executive director of Renewable Energy Policy Project.

"It is very expensive and it is a very big project," Sterzinger says. "The big users can look at exactly what it does to their bottom line. I'm surprised they have been as quiet as long as they have."

The proposed Cape Wind rates are in stark contrast to the lower prices for land-based wind power now available from turbines in Maine, New York and Canada.

Cape Wind's Rodgers says it is an "oversimplification" to compare what TransCanada is offering and what could be provided by Cape Wind.

"A wind farm in northern Maine does not provide the same benefits that Cape Wind would provide," Rodgers says. "It is less productive on peak for one thing. It is behind a constrained electric transmission interface, which means that when Massachusetts needs that power most, it is unavailable."

Rodgers says the TransCanda wind farm in Maine creates no jobs in Massachusetts, whereas "we will create hundreds of jobs during the construction phase of the project and 150 direct and indirect jobs during the 25-year maintenance and operation."

With its higher rates, jobs may be the saving grace, says Sterzinger, noting that the DPU may have a hard time justifying Cape Wind because of the higher rates it is quoting.

"The only possible way that you could argue that the project might make economic sense is if a substantial amount of supply-chain industries were to move to Massachusetts as a result of it," Sterzinger says. "And that is something that you have to fight for. A power purchase agreement should be hinged upon having a substantial amount of components manufactured in the state."

Mass Tank Sales Corp. of Middleborough, Mass., will partner with EEW Group of Germany, one of the world's biggest manufacturers of structural parts for wind farms, to open a new plant that will make the steel pilings used to anchor Cape Wind's proposed wind turbines to the sea floor. A location has not been selected. Gov. Deval Patrick, a proponent of Cape Wind, announced the joint venture on Oct. 13, saying that hundreds of jobs would be created.

"This is what our clean energy future is all about," Patrick said in a prepared statement.

Job creation is one of the criteria to be weighed by the DPU in its consideration of the contract between National Grid and Cape Wind, says Bob Keough, assistant secretary for communications at the state Office of Energy and Environmental Affairs. He termed the news of the joint venture "a very gratifying development and justifying exactly what we seek as a state."

Keough says reports of higher rates facing ratepayers because of Cape Wind do not tell the whole story. The Boston Globe reported that Erving Paper, a paper mill that uses about 3.8 million kilowatts of electricity a month, would see its annual electricity bill increase by $114,000 if the proposed contract between National Grid and Cape Wind is approved by the DPU.

"The numbers are misleading," Keough said. "They are based on assumptions of a future market for conventional electricity which are notoriously volatile and unpredictable. The basic bill impact for a small residential home in 2013 is $1.25 a month."

Rodgers says any rate increase will be small because the amount of power the National Grid proposes to buy from Cape Wind represents only 3 percent of total load. The result will mean only a 2-percent increase for consumers by 2013.

"These same consumers witnessed a 300-percent electricity price increase between 2001 and 2008 because of rising fossil fuel prices" he says.

Most agree that the cost of developing offshore wind will go down as more efficiencies for this pioneering industry are developed.

Indeed, the offshore wind industry will happen because of the huge investments now being made. Schjeldahl points to a joint venture announced Oct. 6 between Northrop Grumman and Spanish turbine builder Gamesa to develop wind farms. Bigger still was the announcement that Google would participate in a consortium to spend $5 billion on building a 350-mile backbone transmission line for wind farms off the East Coast.

"This is a game-changing time. These are huge developments," Schjeldahl says. "And Cape Wind has a lot to do with it." 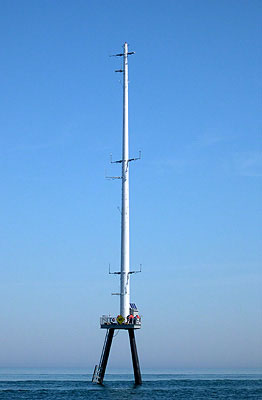 The meteorological tower on Horseshoe Shoal gathers wind and weather data so we can better understand the conditions on Nantucket Sound.
photo courtesy of Cape Wind Associates, LLC 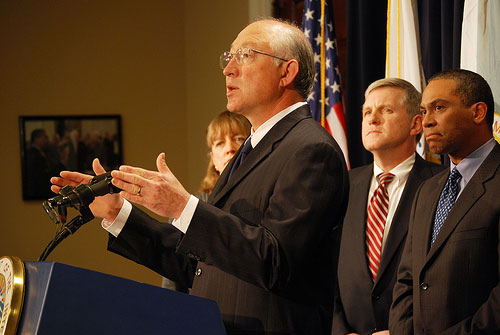 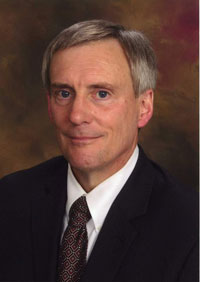