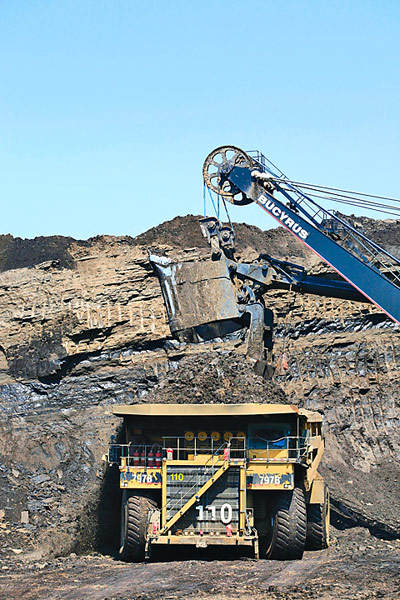 The 797B Caterpillar mining trucks used for the Athabasca oil sands project at the Muskeg River Mine can carry 400 tons. One truck tire stands seven times the height of an ordinary car tire and weighs almost as much as five automobiles.
photo courtesy of Royal Dutch Shell

by RON STARNER
W ith US$216 billion (C$230 billion) in resource-based projects under construction or planned, Alberta has become the leading location in the Western Hemisphere for energy development.
The only question now is: Can Alberta and Western Canada show the world that the region is primed for a healthy mix of diversified industry?
A top Canadian official says yes, and he points to a variety of recently announced projects to bolster his claim.
"A lot of investment is going on across the West," says Brant Popp, executive director of policy, planning and performance measurement for Western Economic Diversification Canada in Edmonton, Alberta. "Some of it is driven by the government of Canada's stimulus plan, but it is also coordinated with other agencies of government to modernize the infrastructure."
Popp cites new investments in biotechnology, financial services, aerospace, agriculture and food processing, nanotechnology, metallurgical processing, distribution centers, renewable energy and genomics. Large investments have come from companies such as Magellan Aerospace, which announced a $104-million, 100-job expansion in Winnipeg, Manitoba, earlier this year.
In British Columbia, Maher Terminals announced that it would construct a $516-million container terminal in Prince Rupert. In Alberta, LaFarge Canada announced a $485-million expansion of its cement plant in Exshaw. And in Saskatchewan, International Debranning Inc. announced it would build a new $172-million barley plant in Rosthern.
Still, the largest capital investments in the West continue to rise from the resource-based industries. In Alberta alone, six resource projects of more than $1 billion each were announced during 2009. The two largest were both unveiled by UTS Energy/Teck Cominco in Wood Buffalo. The twin oilsands investments are $5.176 billion and $2.156 billion, respectively.
'We Have Weathered the Worst'

"We are poised for recovery," Popp says. "The forecast for next year and 2011 is pretty positive, with growth expected in the three- to four-percent range. We have weathered the worst of the recession, and we are seeing big investments in Alberta coming back on line after they were put on hold for a while. The recovery is starting to take hold. Imports of technology equipment are beginning to rise again."
The big gains are occurring in the mining and energy industries. Approximately $130 billion of Alberta's resource-based projects are in oil sands investments. "The investors are coming back," says Popp, noting that "the Firebag oilsands project (by Suncor Energy Inc.) is $9 billion. That was suspended in 2009, but it has been reinstated."
Throughout the West, about 31 oil and gas pipeline projects represent some $9 billion in construction. The largest is the Alberta Clipper Pipeline from Alberta to the U.S. "It provides capacity to export heavy oil from the oil sands much cheaper," explains Popp. "As these pipeline projects get established, the product gets more competitive on price in the world market."
In Saskatchewan, Popp says, "we are seeing new investment in potash. There is some retail expansion going on in Regina, and there is a major distribution center going up there too. Plus, a $150-million metallurgical processing facility is coming on line soon."
Fortune Minerals Ltd., which will build the plant between Langham and Saskatoon, credited the Government of Saskatchewan with passing several new tax incentives — including a corporate income tax incentive — to make the facility investment possible. The gold, copper, cobalt and bismuth refinery will employ 85 people in highly skilled positions, the company said.
The plant site has access to a main line of the Canadian National Railway and is near the Trans-Canada Highway and all essential utilities. "With a diversified economy, a highly skilled work force and respected post-secondary institutions, Saskatoon can accommodate everything that is required to construct and operate this process plant," said Robin Goad, president of Fortune Minerals.
In Manitoba, Popp notes, "there is a major investment at the airport in Winnipeg and related expansion around it. This is a $307-million airport expansion, and Standard Aero is coming in with a $19-million expansion of its own."

A Golden Moment for Vancouver

British Columbia, meanwhile, may end up as the region's biggest winner of 2010, explains Popp, after the eyes of the world focus on Vancouver for two weeks in February to watch the Winter Olympic Games. 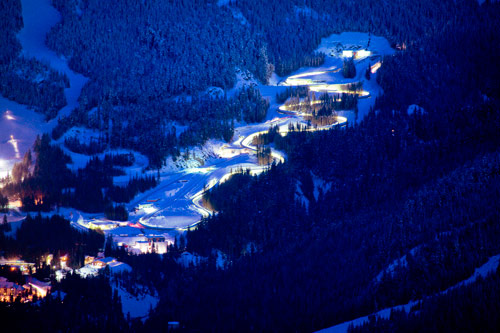 The Whistler Sliding Center is one of many venues primed to welcome athletes and visitors from around the world when the Winter Olympics begin on Feb. 12.
photo courtesy of the Vancouver Organizing Committee for the 2010 Olympic and Paralympic Winter Games, (c) VANOC/COVAN

"Some 833 capital projects are either already on the books or under way in British Columbia," Popp says. "These represent an estimated total of $179 billion in capital investment. A lot of infrastructure development is connected to the 2010 Olympics, including $2 billion for a rapid transit line."
Phil Heard, head of Vancouver Economic Development, tells Site Selection that "the Olympics could not have come at a better time for Vancouver. Our new convention center is a huge expansion and it is covered by one of the largest 'green' roofs in the world. It is a beautiful new place that will serve as the communications center for the Olympics."
Popp says the Olympics will shine a bright light on the efforts of Western Canada to diversify its resource-based economy and make inroads in fields such as aerospace and life sciences.
"The National Institute of Nanotechnology is located at the University of Alberta and supports the growing biotechnology sector of Western Canada," he notes. "Genomics is a growing field here too, as evidenced by the new Academic Health Sciences Center at the University of Saskatchewan. They have recently opened a new vaccine research center for work on animal vaccines."
With Western Canada known worldwide for its rich natural resources, Popp says that increasing "value-added production, through new technology adoption," is one of the region's primary goals for 2010 and beyond. "Our goal is to increase the value of production in Western Canada and attract new types of investment."
Another top goal of WEDC, he said, is to "transfer knowledge into commercial opportunity" by working directly with the region's research universities and institutions. "We call it capacity building," he adds. "There is an awful lot of potential to do more to commercially exploit the research and development that is going on in Western Canada."