The highest-ranking officer in the U.S. Armed Forces
challenges business and community leaders to connect with veterans. 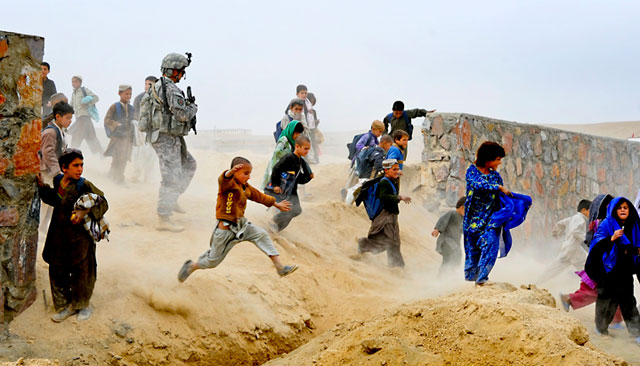 Escorted by dozens of children, U.S. Army Sgt. 1st Class Jeff Cesaitis exits the site of a future park during a site visit in Qalat, Afghanistan, on Oct. 28, 2010. Cesaitis is assigned to the Zabul Provincial Reconstruction Team security force. He is one of many soldiers helping lead projects and programs in the territories in which they are deployed ... and who may be apt for filling such leadership roles when they return home.
DoD photo by Staff Sgt. Brian Ferguson, U.S. Air Force
by Adam Bruns
A

t La Paloma Resort in the foothills outside Tucson, Ariz., on Sept. 30, dapper Pro Football Hall of Fame quarterback Joe Montana could be seen strolling through the lobby, focused on the speech he was about to give to an executive retreat for Northrop Grumman Missile Systems, the area's largest employer.

There's no denying Joe is among the greatest field generals the gridiron has ever seen. But he was up against some stiff leadership competition at La Paloma that week, as some of those Raytheon execs and hundreds of business, community and military leaders in full dress gathered there the very next day to hear Admiral Mike Mullen, 17th chairman of the Joint Chiefs of Staff, address the annual luncheon of Tucson Regional Economic Opportunities Inc.

The highest-ranking officer in the U.S. Armed Forces and the President's principal military advisor, Mullen presides over all meetings and coordinates the efforts of the Joint Chiefs of Staff (JCS), advising the Secretary of Defense, the National Security Council and the Homeland Security Council.

But even the globetrotting and stamina-testing schedule of such a position pales in comparison to the stress induced by combat, something he experienced himself in Vietnam. So he and his wife Deborah are fully engaged in a battle to reach Americans on a host of issues that include survivor benefits, suicide prevention, mental health, wounded care, homelessness and veteran employment and education.

He finds room on his itinerary because he wants his listeners to find room for the 2.2 million men and women in his charge.

"These wars that we've been in since 2001 have changed our military," he said, asking of soldiers and their families "things that we couldn't have imagined." And in a time of change, he said, "their lives have changed." Hundreds of thousands of them are returning to a support system that he characterized as "three stovepipes — the Department of Defense, the VA and then communities," with communities holding the most power for returnees, given the sea of goodwill that seeks to connect with those who have served.

Many of those returning warriors have physical wounds, and even more have post-traumatic stress (PTS), he said.

"One of the guys I was commissioned with was a guy named Mike Hagee, a classmate of mine who was an infantryman in Vietnam in combat there," said Mullen. "And he said, when he was commandant, when these wars started, he didn't know anybody that had ever been in a firefight that didn't suffer from PTS ... anybody."

Mullen is not one to shy away from candid questions or difficult issues, and is squarely focused on the mental health problems rampant among soldiers and their families. Two weekends previous to his Tucson speech, there had been five suicides in the Army.

"We struggle with this as a military," he said. "Actually, I think we struggle as people do throughout our country. We're loathe to raise our hand and say, 'I need help' on the mental-health side of this because of the stigma and the impact that it has."

But the time is now here to deal with such issues — including the danger of repeating the "national catastrophe" of homelesness that the U.S. saw after Vietnam — as returning veterans rise in number.

"We're at a point now where we're going to be home longer than we will have been deployed," said Mullen. "We're starting to get there and over that rest period, that rehab period, that resilience-building period, that reintegration period, I think we're going to see a significant increase in the challenges that we have because of the problems that have just been compartmentalized and stuffed away as we've dealt with and powered our way through these deployments."

Later, in answer to a question from the audience, Mullen described the challenge as an organization.

"We just had a major study on suicide. And what we found is that inside the Department of Defense, we have upwards of 900 programs to get at suicide. Enormous duplication. We don't know the best practices and we've got to work our way through that to get down to those that really are producing the kind of results that impact on that problem."

He said it was much the same story with PTS and traumatic brain injury.

"We know that scientifically, over time, the longer you wait to impact on PTS with an individual, the more severe the outcomes. So many of the veterans who have returned would never ... you may not know. They may not know. But we see it take form years later in their lives and do so in a very, very significant way, much more dramatically so than if we dealt with it up front.

"There's an awful lot of work going to address it within the services. Also, even on the battlefield, if you will, to try to get at it early. But we've got an awful long way to go."

Support services for such issues is one area Mullen is focused on. Gainful and meaningful employment for veterans is another.

"These young men and women are returning from an extraordinary decade where they have been gone much more than they have been home," Mullen explained, saying a typical major unit may be on its fourth or fifth deployment of more than one year's duration since 2003. "The average age in any military unit today is about 21 years old," he said. "So they come back in their mid-20s, having gone through this life experience as leaders, as individuals who performed extremely well under pressure ... and if they've been wounded, they come back and their path to their dreams may have changed, but their dreams haven't changed a bit. They still would like an education. They'd like to be trained for the future. They'd like to raise a family, send their kids to good schools and own a piece of the rock, and they would like to certainly be employed."

Mullen realizes that unemployment is a major issue for many of the communities he's visited. But he said, "as this economy turns around, we can tap this potential. This is a generation that will serve for another 40 or 50 or 60 years in ways that we don't know yet because they are a generation of service. They want to make a difference and those who've served so far in the military certainly have."

Veterans and communities alike can begin now to tap into a new portal called warriorgateway.org, a non-profit clearinghouse designed for military men and women to plug into communities by zip code regarding both services offered to them and employment opportunities. Mullen said the portal program is in the pilot stage in five states now, but may be rolled out nationally in 2011.

It may surprise some that soldiers on deployment often are working on projects that have a lot to do with economic and business development in the areas in which they are deployed.

Asked by Site Selection in a press conference after his speech to expound on the economic development roles soldiers are playing, he said, "We're asking midgrade NCOs, young 1st lieutenants and captains to engage with local leadership in places like Iraq and Afghanistan" and other places, all looking to answer such questions as "How do you get a community going? How do you generate not just development in terms of economic underpinning, but not unlike what you heard today, how do you generate growth? It's one thing to put a project in. It's quite another to put something in that's actually going to grow and generate more jobs over time.

"And I have found in my travels over the last 40 years one universal constant — parents want to raise their kids to a higher standard of living," he said. "They'd like to do it in peace and quiet. And that takes development. It takes healthy economies. It takes an improvement in standards of living. That's true globally. Obviously, it's more difficult in some places than in others.

"But when we're in the middle of a fight — a counterinsurgency fight — and there isn't anybody there that should, sort of, by the book, be there to do this because they've been trained, it's a pretty adaptive, young group of people, and they've been extraordinary, and so they do a lot more than they originally thought they'd be doing. And they're very proud of it."

So why shouldn't they have the opportunity to extend those skills at home?

"I just think that there's a tremendous opportunity to take advantage of their life skills, their world experience, their training, their education, their discipline, their leadership, their technological underpinning," continued Mullen, "to say these are the kinds of people that can make a huge difference in a vast array of businesses in the future and communities. And it's not just commercial business because I think there will be community leaders as well.

"What I'm looking for is a way to connect the two — essentially, the goodwill that's here, the desire to connect, with the potential that's there. 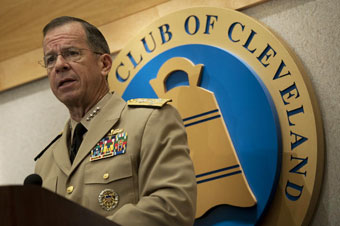 Admiral Mullen\s stop in Tucson was just the latest in a "conversations with the country" tour that has included talks in August with executive and business leaders such as here in Cleveland.
DoD photo by Mass Communication Specialist 1st Class Chad J. McNeeley, U.S. Navy 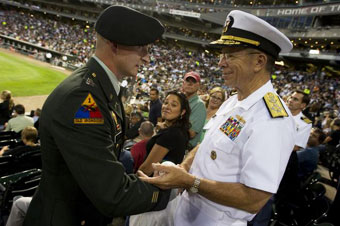 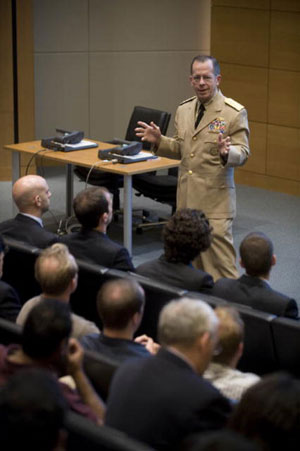 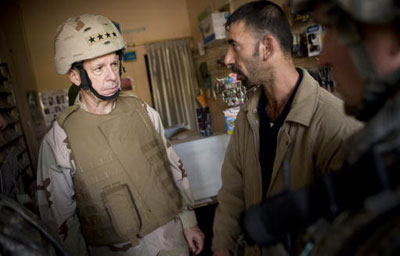 BuyVeteran.com, a directory of veteran-owned businesses searchable by zip code

Challenge America, a national initiative to connect injured military and their families to resources for transition from battlefield to home front