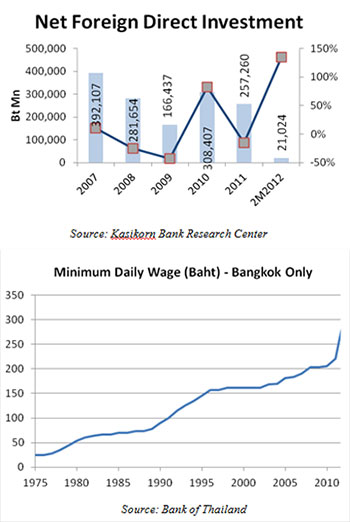 hailand can't seem to catch a break. To outsiders recently, it appears to be in a state of constant turmoil, with violent political protests and natural disasters making the news with regularity. Consider the most recent flooding, in late 2011, which was one of the worst in the past 50 years. The main river, the Chaophraya, literally was overwhelmed and changed its course to submerge much of the northern Bangkok metropolis. The inundation of central Thailand forced some 14,000 factories to shut down, many of which are just now getting back online. Others decided not to start back up. The death toll exceeded 500, millions of people were displaced from their homes, 650,000 people were out of their jobs with uncertain futures, and an estimated US$45 billion in economic damage made it apparent that a hard road of reconstruction and economic uncertainty lie ahead.

So where does the most recent natural disaster leave the "Land of Smiles" economically, and how is it affecting investment and location decisions? The water has receded and Thailand appears to be standing on economically strong footing. Recent government announcements trumpeted that investment value in Thailand rose 106 percent in Q1 of 2012 compared to the same period last year and that projects receiving Board of Investment (BoI) promotion surged 91 percent versus the same period in 2011. Politicians and the mainstream media were quick to applaud the strong GDP growth from the previous quarter and the strength of the Thai people these numbers signified.

The reality of these strong economic indicators is that they are quickly diluted by the waters that decimated the economy six months earlier. This apparent growth is not new investment but instead a measurement of an economy that had hit rock bottom and had nowhere to go but up as it rebuilt from the flood. In absolute terms, according to one of the leading banks and research institutes, the economy grew a mere 0.2 percent, and the strong surge in investment value mainly signifies the investment that existing companies needed to make on repairing, relocating or diversifying their operations elsewhere in Thailand as a result of the flooding. Once the post-flood reconstruction investments stabilize and business returns to normal by Q4 2012 and Q1 2013, this picture may look very different.

Regardless of how we slice the economic data and despite the rapidly changing political winds, Thailand remains an investment destination of choice in Asia. Investors find it an easy place to do business and are attracted to Thai culture, its skilled work force and the advantages the country's infrastructure and logistics have over some of its neighbors.

Thada Pongjetpong, director at NEC/TOKIN Electronics, puts it this way: "Thailand is still attractive for Japanese [foreign] investors given the availability of skilled labor. Thailand's infrastructure is also very good and often better than that of other ASEAN countries. Another important aspect to Thailand is its culture in terms of hospitality and ability to compromise. Japanese investors feel more comfortable with Thailand's business environment given the BoI incentives. Also, Thailand has lower turnover rates among skilled labor compared to Vietnam and China."

This statement resonates with Abraham Sleiman, managing director of Hutchinson Technology Operations, who agrees that "Thailand is hard to beat," when it comes to infrastructure. Vietnam, for instance, faces infrastructure shortcomings as electricity supply is notorious for being unstable. Another positive factor is Thailand's stability in commerce operations regardless of political instability.

We believe Thailand will continue to be a top competitor for foreign direct investment (FDI) in Southeast Asia, but where and why will be different than in the past. As traditional FDI areas north of Bangkok and the Eastern Seaboard will face issues of rapidly rising wages due to labor supply constraints, land shortages and unpredictable natural disasters, GDP growth will increasingly become driven by consumption.

Thailand is undergoing the sharpest minimum wage increase in recent history—36 percent in Bangkok and over 40 percent in some of the poorer provinces. The last period when the Thai labor force received steep minimum wage hikes was between 1990 and 1992 with wages climbing up 15percent, 11 percent and 15 percent year over year. While Thailand has been long overdue for a minimum wage increase, the impact on workers in provinces outside of Bangkok, Ayutthaya, Chonburi and Rayong will be significant. Wage inequality between provinces has been eliminated which means that workers have less incentive to migrate to the popular hubs in search of higher wages if they are able to secure equally paying jobs near their home.

We believe that Thailand is at the beginning of a transformation from Bangkok- and Eastern Seaboard-centric investment flows to shift to a countrywide regionalization of industrial development. The alternative to not doing so in the long term may pose a great risk to the Thai economy. Areas north of Bangkok will not be able to absorb much new investment in the coming years, not only due to lack of projected investor confidence, but also due to capacity constraints.

"New investors will likely not come to invest in the previously flooded zone in the next three to five years," says Somnuk Samsonboonsuk, director of industrial developer Hi-Tech. "Some manufacturers have been looking to diversify their operation elsewhere, such as Eastern Seaboard, Prachinburi and Korat." Indeed, the flooding has created new opportunities in the higher elevation near the eastern provinces of Chachoengsao, Chaiyaphum, Saraburi, Prachinburi and Korat. These areas already have some developed industrial zones, but established industrial development groups such as Hi-Tech and Hemaraj are expanding in these areas as well. Hi-Tech is developing a new zone in Prachinburi province with the goal to make land available for sale or to transfer land deeds in December 2012; Hemaraj launched its Saraburi Industrial Zone in early 2011.

The Eastern Seaboard will eventually become oversaturated with industrial development. Even now, land and skilled labor are in tight supply with factories sending buses to source labor from within a 150-km. radius. The higher cross-country minimum wage will likely not aid the situation as labor from more remote eastern and northern provinces will have the ability to stay home and receive a living wage versus moving to the more developed but higher cost area in the existing industrial regions. Today logistics costs and port access to Bangkok and Laem Chabang port in the Eastern Seaboard still outweigh the wage advantages of locating in a more inland province.

We see that over time, as wage pressure hits the developed areas in closer proximity to the ports, this equation will change and investors will begin looking at investment in other provinces that have lower costs, advantageous BoI incentives and are proximate to some of the new road networks established to link the neighboring countries under the ASEAN Economic Community (AEC) scheme from China in the north to Malaysia and Singapore in the south and Vietnam, Cambodia, Laos and Myanmar from east to west through Thailand.

The transformation of these areas to attract large industrial investment will not happen overnight. But as many of these cities have a number of universities turning out future technical and managerial resources this should provide investors with human resources locally that historically had to be recruited and enticed to move from Bangkok to a more remote provincial location. We believe that this regionalization is inevitable if Thailand is to remain competitive in the future as wages continue to rise and Thailand continues to compete with some of its lower-cost neighbors. The trend that is currently evolving shows that a majority of flood-impacted companies are not so much interested in moving out of Thailand, but rather that they rebuild, diversify, expand or relocate their operations within Thailand, and often at higher ground and less disaster-pone areas.

Another factor that will push the economic development of more rural provinces is that as the minimum wage wises so does domestic consumption. A push for developing northeastern Thailand is slowly taking place and is essential in order for Thailand to sustain its manufacturing hubs and growth. Urbanization of second-tier cities is occurring and with it populations more interested in staying nearby their homes for work. Some of the provinces that are seeing rapid growth include Chaiyaphum, Korat, Khon Kaen, Ubolratchathani and Udon Thani in the northeast and Surat Thani in the south. Another promising trend is the development of retail outlets in these cities. The country manager of one of the leading global third party logistics suppliers in Thailand commented that they see and forecast one of the largest areas of growth for their warehouse and distribution centers will be to serve retailers and big supermarkets like Makro, Tesco and Big C as they expand countrywide.

Like the Chaophraya river during last year's floods, Thailand is charting a new course. Unlike the river's devastating impact on the Thai people and economy, this new regionalization of economic development should be a welcome change, empowering economically the more rural population and leading to Thailand remaining an attractive investment destination for foreign investors looking to access its highly skilled labor market, take advantage of the BoI's Asian regional leading investment incentives and its central location in the AEC.