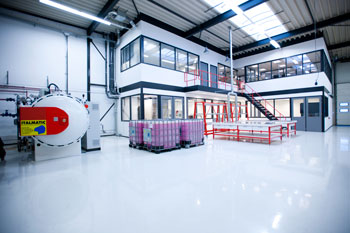 ENSCHEDE, Netherlands, June 26, 2012 – A new laboratory that provides thermoplastic composites research for Boeing [NYSE: BA] and other aerospace companies has opened at Enschede in the Netherlands.

"With this opening, the Thermoplastics Composites Research Center, or TPRC, is no longer a virtual institute," said William Gerry, who represents Boeing as chairman of the TPRC board. "The TPRC research team is now housed in an outstanding facility that will enable them to do the precise measurements that are necessary to conduct innovative research into thermoplastic composites for a broad range of markets."

Boeing, Fokker, Ten Cate Advanced Composites and the University of Twente signed an agreement three years ago to establish the TPRC at the university. The agreement called for the TPRC to accelerate scientific and technological developments for new applications of thermoplastic composites, principally in the aerospace industry.

Since then, the TPRC community has focused on adding new members for research, both nationally and internationally, with special emphasis on subject matter experts. In addition to the four founding partners, five companies have joined the TPRC consortium - Instron, DTC, Pinette, Aniform and Italmatic. Besides the aviation industry, these companies come from diverse areas such as equipment manufacturing, mechanical engineering and materials development.

The TPRC community shares and disseminates knowledge of thermoplastic composites by organizing conferences, training and courses for students, researchers and the industry. Currently, 15 people work at the TPRC, and the staff is expected to grow to 20 by the end of this year.

Boeing has invested in the TPRC to increase its supplier base in the area of thermoplastic composites. The TPRC is aimed at providing Boeing customers with access to accelerated development and use of thermoplastic materials and processing technologies, world-class suppliers and aircraft components at reduced cost, cycle time and weight.

All consortium members allocate an equal share in joint research projects. The University of Twente serves as host for the TPRC, and a dedicated TPRC staff manages its day-to-day operation and research projects.

The concept of the TPRC is that different parties collaborate with each other within the thermoplastic composites supply chain. Research not only involves the aerospace industry but also a broad range of end-use markets such as wind energy, oil and gas, automotive, medical, machinery, infrastructure, sports and marine. The TPRC enables researchers and developers to work together closely on open innovations and use each other's research equipment.

"Boeing has a long and rich history of partnership with many suppliers and customers in the Netherlands," said Marlin Dailey, president Boeing Germany, Northern Europe, European Union and Africa. "We value the Dutch technical expertise, and this initiative with Dutch industry and academia helps us advance innovative aerospace technologies that improve our global competitiveness."

The effort to establish the TPRC began in 2008, when Boeing, Ten Cate, Fokker and the University of Twente began collaborating on two joint research projects that involved materials used in thermoplastic composites, as well as joining/bonding methods.

The use of thermoplastics is growing significantly in the aerospace industry, whose customers want products that are lighter, more cost efficient and environmentally progressive. Companies like Boeing are looking for innovations that will accelerate development of thermoplastic composites technologies and spur their deployment into product lines quickly and efficiently.

The TPRC is one of many research consortiums that Boeing is participating in around the world. As such, the TPRC is able to tap into a global network of research centers and consortia to exchange information and engage in collaborative research projects.

Boeing Research & Technology (BR&T) provides funding and technical expertise to the consortia. BR&T is the advanced, central research and development organization of Boeing. It provides innovative technologies that enable the development of future aerospace solutions while improving the cycle time, cost, quality and performance of current aerospace products and services.
In addition to the consortia, BR&T has research centers in Australia, China, India, Russia and Spain.

The euro’s future is in limbo. GDP growth in emerging markets is slowing. Uncertainty about sovereign debt threatens economic growth across the globe. It’s no surprise, then, that in our latest survey on economic conditions, executives’ expectations for the global economy are the lowest they have been since March 2011. [...Read More]

Energy utility Scottish and Southern Energy (SSE) is planning to create 100 new full-time jobs in the next 12 months in Ireland to support its energy portfolio. It will also be creating 600 indirect construction jobs over the next two years during the construction phase of new energy projects. [...Read More]

The labour market in Germany is in far better shape than many other European Union member states, whilst the labour markets in Spain and Poland remain very weak.

According to the latest labour market index figures from the Federation of European Employers (FedEE) Germany’s labour market has greatly outperformed that of its closest rivals since January 2010. Moreover, All selected labour markets, apart from Germany, continue to perform less well than a year ago.

The UK was the only country to register an increase (3.1%) in the FedEE index in May 2012 compared with the previous month. The largest decline appeared in the Netherlands (8.1%) followed by Germany, Spain and Poland, where the index decreased by 3.8%, 1.2% and 0.9%, respectively.

The movements of vacancy and unemployment rates and real labour costs per unit of output over the last year reveal wide variations between countries. In Germany there has been a positive year-on-year growth in the vacancy/unemployment ratio (+11.4%), whereas Spain (-45.9%) and Poland (-35.4%) have suffered substantial negative movements. Overall, the EU-average decline in the ratio of vacancies to unemployment was -7.7%. By contrast, labour costs increased on all countries analysed - and particularly in Germany (+3.6%), Poland (+2.3%) and Spain (+2.1%).  However, production fell in Spain by 6.3%, by 1.7% in the Netherlands and by 1.6% in the UK.

Speaking at the release of the latest index figures today, Robin Chater, Secretary-General of The Federation of European Employers (FedEE) said that “ The conception of the European Union as a Common Market is now well and truly dead. Cracks are opening up throughout the EU between eastern and western nations, big and small countries, the eurozone and EU countries outside it and well managed economies like Germany and badly managed economies like Spain and Poland. EU politicians need to take a long look at recent trends and decide how the EU model of financial regulation, free movement and political checks and balances needs to change. “

“My view is that the EU experiment has been a fundamental mistake because it was conceived as a top-down solution to maintain the peace in the post-war years. Whereas a successful economic system should be built from the bottom-up – by involving people as much as possible in local economies. Big can be beautiful – but only if made up from the finest component parts.”

The FedEE Index measures the degree of health of an economy by analysing the relationship between labour supply and demand, adjusted by real labour costs per unit of output, conventionally used as an indicator of economic competitiveness. In order to construct our index, we have used data for the rate of vacancies, the rate of unemployment, the production index, the total nominal labour costs and the harmonised consumer price index. The index is based on Eurostat monthly data and FedEE estimates for all the European Union’s 27 member sates from January 2010 onwards. [January 2010 EU27 =100)

The Federation of European Employers (FedEE) is the leading organization for multinational companies operating in Europe. It was founded in 1989 with assistance from the European Commission and has its head office in London, UK. The Federation is a direct member organization currently chaired by Ford Europe.