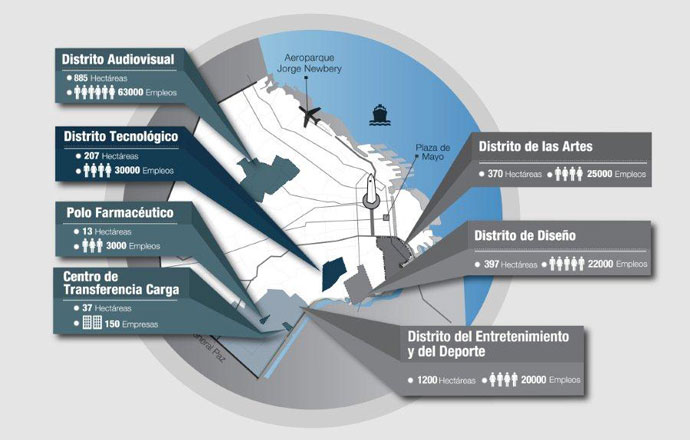 Pictured above: the City of Buenos Aires districts have been so successful that they continue to grow, and more are being created. The latest one is the district for sports and entertainment. The only district that they are missing is the airport city, especially with Jorge Newberry terminal nestled within the concrete jungle, which is one of the largest cities in Latin America, and the world.
by ESTUARDO ROBLES
B 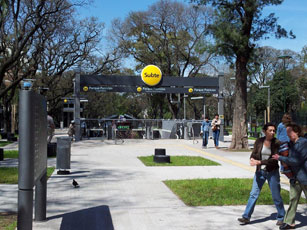 Making the best of what already exists: Buenos Aires has revamped an old degraded subway station at the Technology District and made it cleaner, safer, and more open for the community.

uenos Aires embarked a few years ago on the creation of specialized business and industry districts, and they have been quite successful. Now this doesn't sound like anything new, but there is an important difference. With far less going for them, as compared to other regions that have launched these types of projects, the Argentine capital has been able to do far more with far less. This early success can be almost directly attributed to an impressive and well managed "community building" strategy around each district. The districts are thriving ecosystems, and the community formed around each is what's fueling further growth.

This approach to community building is something that has been missing in some of the larger, better funded projects around the world, especially in Asia and the Middle East. It is not uncommon to see huge parks get built, with impressive commercial real estate development and infrastructure, highly appealing incentive packages for companies to set operations down, and what you get is an outstanding array of buildings and facilities. This works very well for traditional industry sectors and uses, where the economies of scale bring additional benefits to all players. But this approach doesn't work with businesses that operate in the digital economy, where creativity, adaptability and entrepreneurship play a larger role. This is most likely why many have tried to replicate Silicon Valley and the "silicon valley effect" – and many have failed.

It might also only be natural that it is Argentina that seems to finally be doing it right. Historically speaking, Latin America has never really been the best at economic development. Investors can attest to the overall lack of incentives and government commitment (or stability), and many still express the frustration that exists in doing business in the region. But when it comes to new economy, the economic development groups and investment promotion agencies of this region are really leading the way in innovation.

Perhaps the greatest example of this is right next door to Argentina, where Startup Chile has been credited with basically inventing an entirely new approach to economic development. Corfo (Chile's economic development agency) pioneered the concept of awarding seed capital to startup founders from around the world in return for relocating and launching their company from Chile. The program turned one year old a few months ago, and the goal of bringing "1,000 entrepreneurs in three years" to Chile is still there and likely attainable. The mashing up together of so many entrepreneurs from all parts of the globe, interacting and working with the local Chileans, is one interesting alternative to building community.

When planning the districts and building the communities that have been established in Buenos Aires, the City's Ministry of Economic Development had very little influence. The only real ammunition they had was tax incentives, and still these were only mere city and local levies on business. The Technology District, the most successful of all the districts thus far, was even created in an underperforming and less advantageous part of town, meaning there was very little there before the area was named the Technology District. So then it has to be the community-building efforts that have led in only a few years to more than 100 companies relocating into the district and an official tally of 30,000 jobs created. Today, two or three companies each month decide to call the district home.

So what is this community building notion all about? It really is no big secret. It is just a matter of creating a few events here and there, occasionally using the economic development office staff that is in charge of each district to refer potential business between companies, or to arrange introductions between resident companies and outside parties. It seems very simple, yet there is no clear step-by-step process on what to do to replicate it. Perhaps it is just a matter of attitude towards community building itself. When asked, the leadership team at the Centro de Atención al Inversor of Buenos Aires will tell you with complete authenticity how they are just simply committed to the community of their districts. Perhaps it really begins only with that, commitment towards building a community and not just buildings, and the rest just follows.

Buenos Aires offered an attractive package of incentives and support to Banco Ciudad for the bank to build a flagship office venue and multipurpose facility to support the community of business and also local residents.