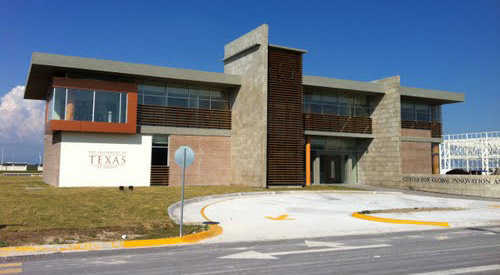 The University of Texas at Austin building, housed inside the PIIT Monterrey Park. UT-Austin has begun teaching in both Monterrey and Guatemala.
S 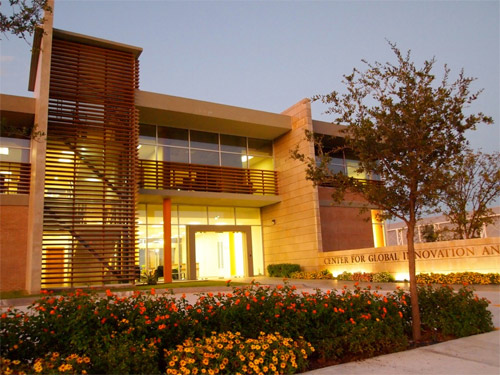 Sites adjacent to airports have an inherent logistics advantage, and sites near a university offer research and future work-force potential. What if a site were situated near both? Universities near airports are becoming increasingly important around the world. They can serve as regional training centers for companies requiring space and instructional resources in a territory accessible by air in a few hours. Students and faculty can play key roles on the training side and in tailoring curricula for industry sector participants contemplating a site nearby. Companies also benefit from access to remote operations and ease of meetings with incoming personnel. Universities in such locations may even see heightened research funding as collaboration with area companies ramps up and new enterprises locate in the vicinity specifically to take advantage of the airport-higher education synergy.

Three such locations already exist in Latin America, which are accessible to the United States in just a few hours by air. Monterrey (Mexico), Guatemala and Panama each have at least two institutions of higher learning located literally across the street from their international airports. And there is available land for business and industry.

The question is: Are these locations realizing their potential? The short answer is no. In all three cases, there is no clear plan yet that integrates the airport's development to the educational institutions' plans, or to an overall area economic development strategy. But the opportunity is there for the firms and developers that invest in these areas and work individually to make the most of the access to the educational component and the proximity to international air connectivity.

At the Parque de Investigación e Innovación Tecnológica –  PIIT, more than half of the projected 30 R&D centers have been built and are in operation. Approximately one third of the centers belong to local, national and international universities such as ITESM, better known as "Tec de Monterrey", the Public University of the State of Nuevo León (UANL), the National Autonomous University (UNAM), and the University of Texas at Austin, which has established the Center for Global Innovation and Entrepreneurship, operated by the IC2 Institute. Another third of the centers are branches of some of the more than 25 federal research centers of CONACYT, the National Council of Science and Technology. The final third, rounding out the "triple helix" concept, are from national and international corporations such as Sigma, Xinux, Motorola, Pepsico, Katcon and (in construction) Schneider Electric, as well as the Monterrey IT Cluster which will house 38 software development SMBs. The 70-hectare (173-acre) park recently acquired an additional 30 hectares (74 acres) for expansion.

While most of the PIIT land plots have been taken, there is available built-out Class A office space. A few industrial parks a short distance from the PIIT and Airport have available space, and a single tract of land separates the PIIT from the airport terminal, owned by the ITESM endowment (patrimonio). ITESM is an institution recognized for its agility in working with private-sector partners. Additionally, OMA, the airport operator is partly owned by Aeropórts de Paris, which has experience in land-side development of airports, or airport cities.

In contrast to Monterrey's brand new R&D Park, La Aurora International Airport in Guatemala City has had educational institutions surrounding it since the middle of the last century, and in between the concrete jungle that has formed in the area, there are still several available locations that can take complete advantage of both education and air connectivity, particularly along the Atanasio Tzul corridor.

Two universities are located next to the airport. The small, private Universidad del Istmo (1,500 students) is literally walking distance from the international terminal, and further out is Universidad de San Carlos, the country's national university, with more than 90,000 students. In addition to these institutions, the area immediately around the terminal has three museums, one art gallery, a handcraft market, a sports arena and a zoo. All of this makes it perhaps the most under-utilized Airport City in the world.

The two- to three-mile (three- to five-km.) tract of city highway nudged between the airport and Universidad San Carlos is an industrial corridor known as Atanasio Tzul. Occupied by heavy industry, chemical and distribution operations, the land uses have been slowly morphing towards more technology and knowledge-intensive enterprises. Buildings housing more than 3.5 million square feet (325,000 sq. m.) of Class B office warehouse space and 1.5 million square feet (140,000 sq. m.) of Class A offices have been built in the area, with more to come. A handful of transnational call center and BPO companies have built facilities and hired close to 2,000 workers.

Panama's international airport is home to an ideal combination of educational establishments. Located between the airport freeway exit and the terminal are both the Panama University of Technology and the Panamanian Technical Training Institute INADEH. To make matters more interrelated, a large part of the recently acquired land by the airport operator for future airside services expansion, including the third runway, was actually property of the Universidad Tecnológica.

Panama boasts one of the clearest visions of an Airport City in all of Latin America. Yet despite this clarity, in their economic development planning, which seems to have thought of everything, the one missing component is education and training. This leaves a clear opportunity for those willing to invest the time and resources to develop joint collaboration work-force training and even R&D programs with these institutions, which are more than willing to work collaboratively with industry.

These locations have many of the ingredients that will be in increasing demand by companies. This is a significant opportunity for these areas, if they have the vision to bring together their education and logistics strengths in such a way that businesses will benefit. Airport administrators around the world work with business and industry to serve their needs better, as do universities and technical colleges. The areas discussed here have both in close proximity. Investors will take notice in due course. Economic development authorities should take notice now.

Estuardo Robles is an international business developer, entrepreneur and economic development trainer and is founder of The Americas IT Business & Investors Forum (www. americasitforum.com). He is based in Austin, Texas.