Kurdistan: Where Pioneer
Investors in Iraq Get Started

Early real estate investors share tips on establishing a
beachhead in an unlikely land of opportunity. 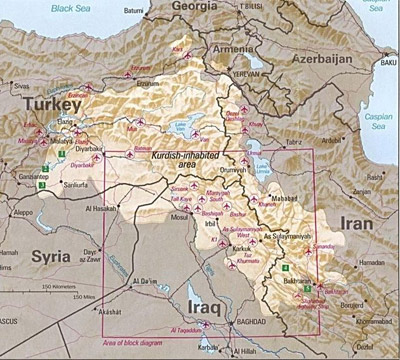 raqi opportunities. These two words don't seem a good match, unless perhaps in the context of the oil or security businesses. But the phrase makes sense in Iraqi Kurdistan, the autonomous northern region of Iraq, where early commercial investors are now on the scene. Across many areas of Iraq, peace is fragile and daily life can still be unpredictably dangerous. But growth is returning to Iraqi Kurdistan led from its capital, Erbil. Brands such as Sheraton, Hilton, Porsche and Sony are entering Kurdistan looking to access the potential of this region of 4 million people. Nissan has opened its largest service center in the Middle East, and its new airport, opened in 2005, has one of the longest runways in the world.

Kurdistan has stayed off the radar of many business investors apart from those with oil-industry involvement. But Kurdistan's low profile is starting to change. In 2011, about 430 foreign companies registered there, a 30-percent increase on 2010. And while the majority come from neighbouring Turkey, Kurdistan's potential importance to America was underlined in April as a new U.S.-Kurdistan Business Council (USKBC) was launched, backed by regional president Masoud Barzani.

While Iraq overall ranks near the bottom of world league tables for ease of doing business, it has attracted over US $16 billion in investment since 2006, with per capita income rising 1,150 percent since 2002. Iraqi Kurdistan is also set to announce a new strategy for international cooperation and further address corruption.

USKCB founding member Paula Freer, director of international government affairs for Marathon, insists that Kurdistan presents "many business opportunities," and Barzani's support "will only enhance… the growth of U.S. investment."

New York-based Claremont Group LLC, a USKBC member, is keen to spread the word. Claremont was quick to spot the opportunities for real estate and is currently the only American company building on a significant scale in Erbil.

Claremont Principal Stephen Lari has nurtured the region, rich in oil and gas, for three years. "There was a strong desire for American investment," he says. "The environment is safe and secure – Kurdistan is nothing like the image of Iraq portrayed on CNN – and there was an enormous pent-up demand for real estate. "

Unsettling images, along with the perception that Kurdistan presents a small market, may have accounted for the slowness of multinationals moving in, he says. Yet for Lari, Kurdistan presents "a unique opportunity." He's impressed by the government's investment in infrastructure – roads and electricity – rather than its own buildings, priorities he describes as smart. "All this has happened in the last half dozen years. It's a truly remarkable feat," he says.

Claremont is eight months into building a 1,540-unit gated community of houses and flats, Atlantic Villas, handily located in proximity to Erbil's central business district and new airport. Currently 500 houses are under construction. The scheme, targeted at Kurdistan's growing number of middle-income families, will also include a commercial center, health center and other infrastructure.

"We spent a lot of time sourcing land, and we're also looking at smaller urban locations for apartments, of which local residents are becoming more and more accepting," says Lari. "In the past they [stuck to] two-storey houses, but there's scarcity of land. We're also looking at industry and investigating the possibility of building a couple of factories – and thinking about other cities." Erbil has developed an uninterrupted energy supply from its gas-fired power plants – something that is crucial to any new factory. It even manages to export power.

Alongside Atlantic Villas, Claremont is working with Hilton Worldwide to build a "western style" hotel aimed at the international business and tourist trade. The 200-room DoubleTree Suites is due to open in Erbil next year. This reflects a trend already underway: Best Western has already opened two hotels there, and Marriott International plans to open a further two in 2014.

What lessons does Lari have for others thinking of hitting the trail to Kurdistan? First, put the hours in. "I'm there 40 percent of the year. You can't do this from your home office in America," says Lari. "You have to have a fair amount of patience and be sensitive to the culture."

Not everyone is at ease with the business climate. Reports occasionally surface of corruption and the need to pay before you play when dealing with officials. Kurdistan would rather be known for foreign investment laws that open up the possibility of owning land, tax holidays of up to 10 years, and easy repatriation of profits.

What does Lari make of the sceptics? "We haven't seen it (corruption), and I'm not saying that in any naïve way," he says. "We're a U.S. company, and I think everyone understands that's something we wouldn't expect to see. We have top-line government support; people have behaved themselves." Anyone tempted into taking such a shortcut should stick to their principles even if it means waiting longer to get things done, he relates.

Claremont has a head office of around 30 in Erbil running its construction, sales and marketing sides. Having invested more than $180 million in Atlantic Villas and the Hilton hotel, Lari is a stickler for setting high standards around buyer expectations. "We decided that with any project we'd bring a Western philosophy to what we were doing," he says. "You only get one shot at building a reputation."

This means rigorous due diligence. "We've spent a lot of time investigating the reliability of labor. We've decided on a hybrid approach. We run our own construction company but have also invested in local contractors." Claremont exercises daily vigilance over its hired work force; quality control extends to making concrete on site.

Bringing top-level commitment and an open mind offer the best chance of reaping rewards in Kurdistan, says Lari. "Don't be afraid to take a corporate approach and employ those ideas, even if it hasn't necessarily been done in the past here," he says. "Sometimes that's a risk, but the whole idea is to bring in new ideas and technologies."

Prospects have also captured the U.K. imagination, according to Kurdistan Regional Government (KRG) London-based Director of Trade and Investment Nawal Karim. "Numbers of U.K. companies registered there are the highest of any European country, and a trade visit last October attracted a record number of delegates – more even than went to China," she said.

Karim said KRG has been aggressively marketing the region since 2006, but British interest has really taken off in the last two years after a trade and investment conference in 2010 attracted 300 companies.

One highly visible legacy of international involvement is Erbil's international airport, designed by U.K. architects Scott Wilson Group plc, responsible also for London Stansted airport (URS acquired Scott Wilson Group in September 2010). It's a striking gateway for tourists who, Karim says, are Kurdistan's great untapped market. "We have all the mountains and heritage waiting to be discovered." The big hotel chains are already on the case, and no doubt others will soon follow.

With cranes stretching across the skyline, Erbil reminds many of the early days of the growth in the boom markets in the Gulf such as Dubai. Approaching Iraq as one market challenge may not be the best approach. Starting with Iraqi Kurdistan is a sensible way to getting started.