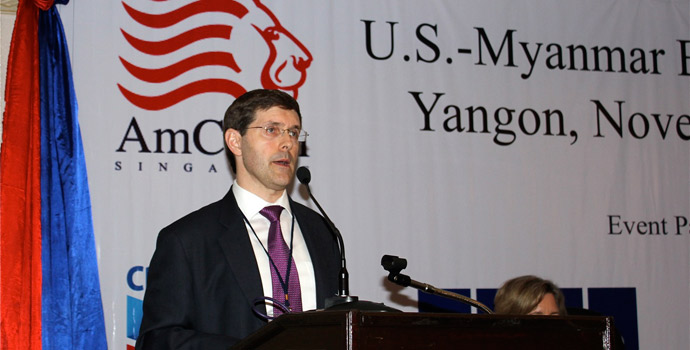 yanmar, formerly known as Burma, is one of Asia’s final frontier markets and investment destinations. Long isolated from the outside world by an oppressive military regime, the country, stifled by corruption, bizarre exchange rate policy and international sanctions, missed out on the Asian economic revolution.

Today however, Myanmar is being cast in a new light. Transitioning from a military to a nominally civilian regime, Myanmar is attempting to reform to attract investment and join the rest of the world in international trade. The country signals its readiness for progress by implementing a swath of political and economic reforms and allowing the former political prisoner and opposition leader, Aung San Suu Kyi, to enter Parliament after nearly 15 years of house arrest.

To encourage continued reform, the US has dramatically eased the two decades of constrictive sanctions on financial investments and trade, allowing a host of companies and other countries to enhance economic relations with the former breadbasket of Southeast Asia. Building on the positive momentum, last week, the Myanmar government finally passed the long-awaited Foreign Investment Law, which effectively opens the nation to global investment.

With an abundance of natural resources, a large and low-cost labor pool, and shared borders with 40 percent of the world’s population, it should be no surprise that global companies are rushing to open this treasure chest of opportunity.

The buzz around the new investment legislation has kicked off a slew of conferences, events and high level meetings between Myanmar President Thein Sein and heads of state from Korea, Thailand, Japan and India as well as economic missions from ministers of trade and foreign affairs from the United Kingdom, United States, Canada the European Union and others. Highlighting the importance of Myanmar reforms, Barack Obama will be the first U.S. President to visit the country as part of his greater Southeast Asian tour continuing the United States’ “pivot” toward Asia.

The legislative framework for FDI is gradually starting to improve with the reformed Foreign Investment Law (FIL), signed into law by the President on November 2, 2012. While somewhat vague in its wording, the document provides greater clarity to overall conditions for foreign investment. Notably, it drops restrictions on foreign ownership in many sectors including oil and gas, banking, telecommunications, media, mining, transportation and power. Moreover, foreigners are allowed to take a 100-percent ownership stake in the aforementioned industries and many others. However, foreign companies’ investments will be restricted in sectors deemed hazardous or environmentally unsound and on those deemed as encroaching on protected Burmese small- and medium-sized enterprises, such as animal husbandry, fisheries and traditional handicrafts.

Unfortunately for all of the FIL’s positive changes there are some vaguely written clauses, such as the one that seemingly gives the government the ability to restrict foreign participation in both the manufacturing and service sectors for businesses that are considered competitive to those operated by Burmese citizens. Although unclear now, the vagaries will hopefully be clarified in the next 90 days in the new Ministry of National Planning and Economic Development Foreign Investment Rules (FI Rules). Changes will need to be followed closely by new investors as they start setting up in-country and potentially competing with existing Burmese national interests.

The FIL makes some sweeping changes to the investment criteria and tax laws. Minimum capital requirements are expected to be relaxed from the current US$500,000 and $300,000 level for manufacturing and services investments, respectively, with the exact amounts expected to be defined in the new FI Rules. The FIL improves the investment tax incentive framework, implementing a five-year corporate income tax holiday (from a base corporate income tax rate of 25 percent) with the possibility for extension. Exemptions on customs duties and commercial taxes on export products are also included, supplementing the incentives under the 1988 Investment Law.

New land use permissions further improve the viability of foreign investment into manufacturing. The FIL will allow private parties to lease land for 50 years, with the option to extend 10 years, twice. This provides some degree of long-term certainty, encouraging higher levels of investment. Additionally, some controversial clauses, such as those requiring the transfer of assets to Myanmar citizens at the end of the investment period, have been removed. Under the new investment law, foreign investors have the right to sell interests to any Myanmar or foreign party while lawful provisions legally protect foreign investment from expropriation and/or nationalization.

The protections and incentives in the FIL compare relatively well against those of regional neighbors competing for foreign investment, although its vagueness is a disadvantage when comparing to the clearly defined mechanisms allowing foreign-owned companies to engage in restricted activities as outlined by the Thai Board of Investment (BoI) or the Industrial Estate Authority of Thailand (IEAT). The FIL’s scope of permissible sectors for investment appears much closer to the more open door investment policies of Cambodia, than Thailand’s Foreign Business Act, which restricts investment in sectors such as communications, transportation, retail, natural resources, banking and others.

New protections for investors and a relaxed investment regime will open up the market for early stage opportunities. Light-industry (particularly garment manufacturing and food processing), storage and logistics, hotels and tourism, construction and industrial estate development, telecommunications as well as longer-term more capital-intensive extractive industries such as oil and gas, mining and timber should all be benefactors of recent economic liberalization.

Changes to the investment law that encourage economic development will encourage companies to employ Myanmar's 37 million strong, comparatively young labor force that accounts for 68 percent of the population. Currently, 56 percent of these laborers work in agriculture and agri-business, producing approximately 36 percent of total economic output.

Given low levels of economic development and high underemployment, Myanmar's manufacturing labor rates are some of the lowest in the Association of Southeast Asian Nations (ASEAN), heightening the country’s future prospects as a manufacturing destination. While there is currently no minimum wage, low-skilled laborers earn on average only $60 per month which is the lowest wage rate compared to the statutory minimum wage rates of its ASEAN neighbors: $260 in Thailand, $79 in Indonesia, $71 in Laos, and $66 in Cambodia and Vietnam. Myanmar labor wages are also far below the $115 per month minimum wage in the under-developed, bordering Chinese province of Yunnan.

In addition to cheap and abundant labor, Myanmar has large stores of minerals, timber, oil and gas. Largely untapped, the country’s estimated oil reserves of 3.2 billion barrels and proven reserves of 7.8 trillion cubic feet of natural gas have drawn interest from China, India, Russia, Switzerland and other Southeast Asian nations. The country is also one of the world’s largest producers of gems, semi-precious stones and jade. Mining, however, is almost devoid of sustained foreign investment as companies struggle to cope with the excessively onerous Myanmar Mining Law and its provisions for uncompetitive high production sharing requirements.

While most Western nations – the US, UK, EU, Canada and others – imposed sanctions on trade, investment and currency transactions during the last two decades, countries without such restraints moved to entrench themselves in Myanmar during this period of limited international competition. Although Asian investors from Singapore, Thailand and Korea have invested moderately in sectors focusing on low cost, unskilled labor, most investment has come from China. Not including those companies separately listed in Hong Kong – which also accounts for a whopping 15.5 percent of all FDI into Myanmar – China accounts for 34.2 percent of all investment into the country, including $8.3 billion of mega-project investments in power, oil and gas pipelines and port infrastructure.

The advent of the FIL is a good move towards leveling the playing field for all foreign investors in Myanmar. The Burmese are actively looking to diversify themselves away from their traditional investor and trading partner, China, and looking towards Japanese, European and North American investors for new FDI.

Despite the positive changes in the FIL, Tractus cautions investors to look before they leap. While the recently revised FIL certainly includes more investor-friendly clauses than earlier drafts, many of its provisions remain vague and tied to the implementation of additional FI Rules that are awaiting promulgation. This includes the revamped Myanmar Investment Commission (MIC), which will have broad responsibility and authority for approving and overseeing investment applications as well as ad hoc incentives and regulation. Currently, the MIC, whose members are chosen by the central government, has too much discretion over rules governing foreign investment. Indeed, a recently translated version of the FIL suggests the MIC will have virtually unlimited power to accept or reject investment proposals based on an array of subjective evaluations.

Another major challenge is that while sanctions have been eased they have not been lifted. The remaining sanctions against a list of Specially Designated Nationals (SDNs), who are largely former government officials and a select few of the most well-established private sector business persons, will continue to inhibit foreign access. These influential people would likely be some of the first potential business partners new investors would meet. New market entrants will need to be exceedingly cautious about pursuing relationships with these SDNs which could easily run them afoul of the remaining sanctions.

Unfortunately, much of the country's administrative systems is antiquated and still strongly resembles the bureaucracy installed during the British Colonial period. There are too few well trained lawyers, bureaucrats and managers capable of servicing the number of demanding investors. New foreign companies will need to be careful and patient as Myanmar irons out the cornucopia of legislative and contractual issues that arise when opening the economy.

Myanmar’s new FIL appears to be comparatively liberal and compares well with the investment legislation of other ASEAN countries. However, the legal definition and clarity of its provisions still leave much to be desired. The FIL is a work in process and will continue to evolve. Prospective investors will need to stay tuned for the soon-to-be-announced FI Rules to see if they offer more clarity, objectivity and predictability to the process.

So while business delegations continue to stream into the country in hopes of understanding how to capture Asia’s last emerging tiger by the tail, well counseled investors should proceed with caution. Although Myanmar’s large, young work force, abundant natural resources and strategic geographic location, as well as the passage of the long-awaited FIL tempts investors from the world around, caution must be heeded. What remains to be seen is whether the antiquated legal system, bureaucracy and human and physical infrastructure can keep up with the development of those new opportunities. 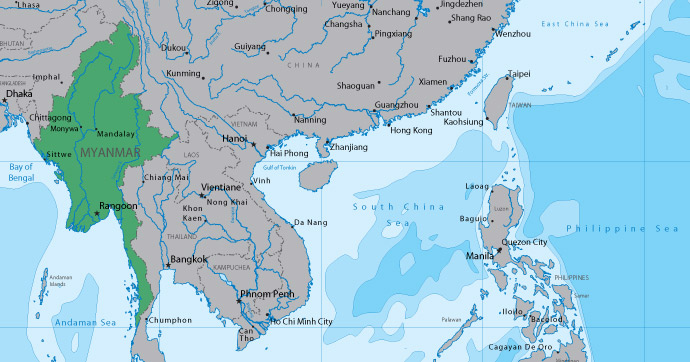