Volkswagen in Brazil: Power to the People

The maker of “the people’s car” employs some environmentally sensitive production
processes in one of its most important growth markets. 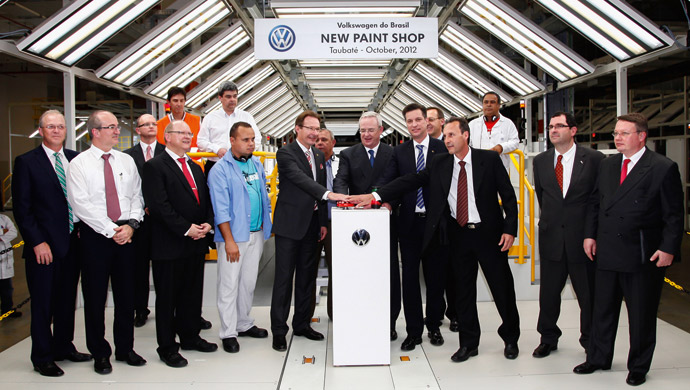 he Volkswagen Group is expanding its ecological and social commitment in Brazil as its growth trajectory there gains altitude. “The Brazilian automobile market has significant growth potential. The Volkswagen Group will harness this growth and drive it forward,” said Prof. Dr. Martin Winterkorn, Chairman of the Board of Management of Volkswagen Aktiengesellschaft, on October 21st, on the eve of the São Paulo Motor Show. “As an investor and innovation engine, as an employer and by creating opportunities for people in this country, Brazil is very much a cornerstone of our Strategy 2018.”

The Volkswagen Group will invest €3.4 billion (US$4.3 billion) in Brazil through 2016 in new products and technologies and in expanding its manufacturing capacities. Environmentally friendly production at the six plants operated by the company in Brazil and expanding development of renewable energies are one focus of investment. Going forward, the Taubaté plant will build up to 1,300 Volkswagen Gol and Voyage models per day using new, environmentally friendly painting standards. “Expansion of the paint shop in Taubaté is a further milestone in the Volkswagen Group’s South America strategy,” said Dr. Michael Macht, Member of the Board of Management of Volkswagen Aktiengesellschaft with responsibility for Group Production. “Apart from increasing our production capacity, we will also be achieving a significant improvement in resource efficiency.”

The state-of-the-art filler-less painting process combined with an innovative method for collecting overspray results in energy savings of 30 percent per unit, while water consumption is cut by more than 20 percent. Investment in the paint shop totals €157 million ($199 million). In addition, €126 million ($160 million) is being invested in expanding capacity at São Carlos, Volkswagen’s Brazilian engine plant, from the present 3,800 units to 4,800 engines per working day. Both the EA111 internal combustion engine (Flex-Fuel) and engines featuring the latest technology will be built in a new production hall.

Volkswagen is simultaneously intensifying its role as a pioneer in protecting the environment and preserving resources; it is planning a second hydropower plant in Monjolinho/São Paolo to generate 25.5 megawatt hours. Volkswagen is investing €66 million ($84 million) in the project. Back in 2010, Volkswagen – as the first and only automaker in Brazil – invested some €58 million ($74 million) in a hydropower plant at Anhanguera near Guará/São Paolo, which generates 22.7 megawatt hours.

The two hydropower plants will mean that “green” energy will account for 94 percent of Volkswagen’s energy needs in the future and that the company will generate 40 percent of its energy needs by itself.

For the Volkswagen Group, Brazil is a strategic growth market with enormous potential. “For almost 60 years, Volkswagen has been a strong innovation driver in Brazil,” said Thomas Schall, President and CEO of Volkswagen do Brasil. “This is evidenced by achievements such as the Volkswagen Gol – the country’s bestseller for over 25 years – or Flex-Fuel technology, which Volkswagen introduced in 2003 and which today features in over 86 percent of all new vehicles in Brazil. Today, the Group has a presence in the country with 10 brands and a broad range of products. The company further increased deliveries in Brazil from January to September 2012, and handed over 573,700 vehicles (Jan.-Sep. 2011: 530,500; + 8.1 percent) to customers. Last year, the South American subsidiary of the German Volkswagen Aktiengesellschaft manufactured 828,400 vehicles for sale in Brazil and for export.

Volkswagen is committed to economic and social sustainability in Brazil and is setting another first-class example of promoting young talent with its “StartUp Brasil” trainee program, which now also features an international module. “StartUp Brasil” gives young talent with above-average qualifications an unparalleled start in the company. The program is aimed at particularly dedicated university graduates with initial professional experience. The trainees complete an 18-month program in various departments with a view to extending their skills. In addition, they now have the opportunity to gain international experience through a posting in another country. “Our trainee program is aimed at the very best. ‘StartUp Brasil’ therefore makes an important contribution to qualifying top talent from Brazil,” noted Dr. Josef-Fidelis Senn, Vice President, Human Resources at Volkswagen do Brasil.

By the end of the year, over 300 more community water pumps will have been installed to provide concrete help for people in semi-arid regions of Brazil. Volkswagen do Brasil has taken over responsibility for managing the Popular Water Pump (PMP) program. Under this project, water pumps that are simple to use are installed in nine Brazilian states bringing water direct to the communities. The number of pumps is thus being increased to around 1,000; that means 140,000 people, most of them on a low income, will in the future have access to free-of-charge water supplies. 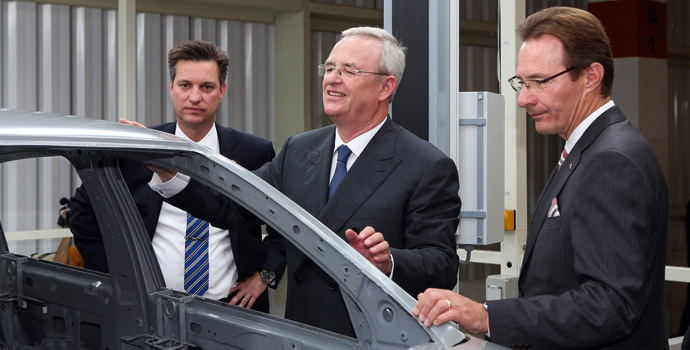 Thomas Schmall, CEO of Volkswagen do Brasil, Prof. Dr. Martin Winterkorn , Chairman of the Board of Management of Volkswagen AG and Dr. Michael Macht, Board Member of Volkswagen AG with responsibility for ‘Group Production’, check the quality of the new painting area .