London and the U.K. have turned their attention to transforming their
massive investment in hosting the Olympics into long-term economic benefit.
Companies that orchestrated the Games already are looking to Rio. 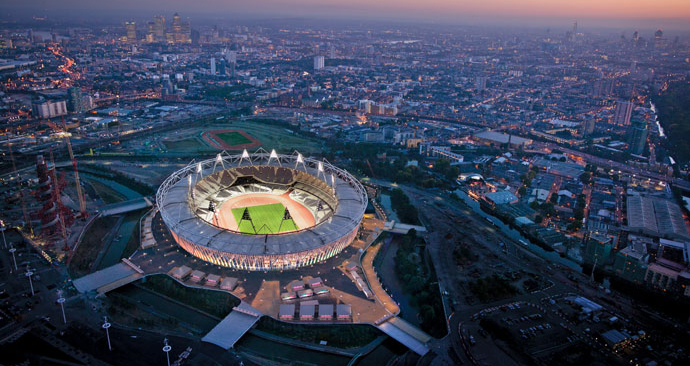 Experts say recovering the U.K.’s investment in the Olympic Games is a long-term process.
Photo courtesy of London 2012/Populous
by ROB DENMAN
N

ow that the last medal has been awarded, the crowds have gone home and the stadium lights have been extinguished, what will determine if the 2012 London Olympics were truly a success will be the legacy the Games leave behind for the U.K. According to market intelligence firm Euromonitor, an estimated £25 billion (US$39 billion) was spent preparing London for the Games, including stadium construction, regeneration, infrastructure projects and marketing — is this money well spent?

The obvious companies who should benefit would be those connected to sport and tourism. Matt Rogan, managing director of sports business consultancy Two Circles, recognizes that you do not recover this investment within the couple of weeks of the event. "If you look at what's being spent on the Games, it's an investment that will play out over five to six years — 60 percent to 70 percent of economic benefit happens after the Games as opposed to before the Games," says Rogan. Two Circles works with many of the companies that were successful in their bids for Olympic projects

The state of the world's major economies — the U.K. included — is never far from the front of the business pages. Depending on who you listen to, the U.K. economy is not growing, and according to research consultancy Capital Economics the Olympics themselves will only provide a temporary 0.8-percent boost to the GDP.

Some U.K. manufacturers, such as Coca-Cola, which made over 95 percent of the drinks it sold at the Games in the U.K., will gain a short-term boost. But any real conversation about London's Olympics legacy should only take place after at least 10 years, Rogan adds.

London & Partners, the official promotional organization for London, is looking at a similar timeframe for judging the Olympic Games legacy. For example, the economy of London is projected to grow by £155 billion ($242 billion) by 2025, says Gordon Innes, London & Partners' chief executive. The Olympics' legacy will be a significant contributor to that, he adds.

One example of the greater indirect economic benefit the Olympics will give the U.K. can be seen in the construction sector. Investment in the construction of new sports venues helped support the flagging sector through the recession, says Daniel Tarling-Hunter, economist for market intelligence firm Euromonitor. The sector did not see major increases in job creation or output, but this was due to the weak housing market and the Eurozone crisis. It is impossible to say how much worse construction would have fared if London had not hosted the Games, he adds.

U.K. construction firms involved in the Olympics will be able to source further work based on their reputations for sustainable Olympic Games construction, says Rogan. For example, the Buckingham Group, constructors of the Copper Box — the Olympic arena for handball and other indoor sports — has been contracted for further leisure center work across the U.K. based on its Olympics work.

Other sectors that many would not consider to be the most obvious candidates stand to benefit even more from the Olympics, says Rogan. Sectors where London already excels will receive a big boost. U.K. businesses in IT, financial, telecommunications and marketing sectors will burnish their reputations by being part of the roll-out of the Games, and many will be invited to bid on projects for the 2016 Rio de Janeiro games too, he says.

North Greenwich Arena, home to the 2012 Olympic Games basketball and gymnastics competitions, was already a reuse project: The dome was constructed in 2000 as part of Millennium celebrations.
Photo courtesy of London 2012/ODA, photo by Anthony Charlton

Smaller firms involved in the set-up and running of the Olympics will establish themselves as Olympics experts, similar to how many Australian firms involved in the 2000 Sydney Games have gone on to become Olympics experts. In the U.K., many of the IT and telecommunications firms responsible for controlling and maintaining the U.K.'s fiber-optic network during the Games are likely to be involved in Rio. "Demands on firms running IT networks are only getting bigger," he says.

Larger firms will be able to use U.K. personnel to take the lead in Rio. For example, French IT firm Atos Origin will use employees at its U.K. offices to take the lead on IT provision in 2016, he adds.

As well as experience for firms and job creation, London itself will benefit from the Games. Stratford, the area of east London where the majority of the Olympic venues are located, will see significant regeneration.

The Olympic park will be renamed Elizabeth Park and converted to a mixed-use facility, including housing and entertainment, retail and business venues. Around £12.5 billion ($19.5 billion) has been invested in the area and its continued development after the Games. This includes the construction of new housing and the creation of a technology hub at the site, says Tarling-Hunter.

London will look to use Stratford as a springboard for further regeneration, says Innes. Commercial hubs are to be set up or expanded in other eastern areas of the city such as around Old Street, in Greenwich, and at the Royal Docks.

Increased connectivity and possibilities for collaboration from the new developments will especially benefit sectors such as IT — where a hub has organically grown up around the Old Street — and life sciences — where a hub of companies will set up in the Royal Docks once development is complete, he adds.

The Olympics also works to make London and the U.K. more attractive for possible investment and to boost 'Brand Britain'. The iconic Battersea Power Station — made famous by appearing on the cover of the album "Animals" by legendary band Pink Floyd — seems to have finally been sold and is set for redevelopment. The site with a total area of over 195 hectares (481 acres) has sat derelict for over 20 years with many potential buyers showing interest but never following through. Malaysian firm Sime Darby purchased the site at the start of July. The site has a development value of £8 billion ($12.5 billion) and will create 20,000 construction jobs as well as a further 13,000 permanent jobs once completed, Sime Darby says. The development will also see an extension to the Northern Line of London's underground that will improve the area's connectivity — important to its continued regeneration.

Further Olympic investments in infrastructure will also benefit London. It is estimated that when London's east-to-west line, Crossrail, is finished, it will give an extra 1.5 million people a commute of less than 60 minutes to central London. London & Partners estimate this will generate around £42 billion ($66 billion) extra for the U.K. economy, Innes says.

"You can't look at the Olympic Games as a sports event — sports is kind of incidental," says Rogan. "It's a catalyst for creating investment and making a new community in an area of London that's been below the property line."

It is investments like these and the expertise gained by the British firms involved in delivering them on time that will form the kind of Olympic legacy that lasts long after the cheers have faded away.

Rob Denman is editor and CEO of London-based Pathfinder Business.

After 20 years of sitting derelict, the Battersea Power Station was purchased for
redevelopment in July by Malaysian firm Sime Darby.
Photo courtesy of Knight Frank