While other markets in the region make headlines,
Morocco is quietly building its base of industrial investors. 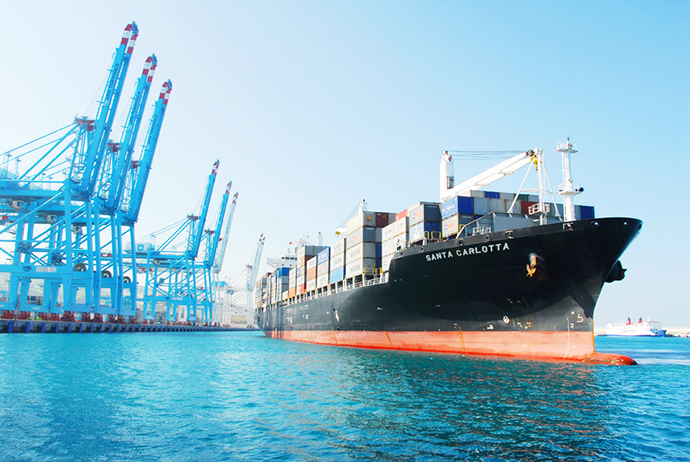 n the past two years, the dramatic changes in Arab countries have been a primary focus of attention. But many have failed to notice Morocco's efforts to modernize and its progress in improving its position as a target for FDI. Renault, Delphi, Lear, Leoni, Yazaki, Denso, Faurecia, Sumitomo and Austrian Hirschmann Automotive are some examples of key investment projects from the last couple of years. These companies alone have created 45,000 jobs in Morocco.

Superficial analysis might lead to the conclusion that Morocco is merely benefiting from destabilized neighboring countries. A closer look at the north African kingdom reveals that Morocco's increasing attractiveness stems rather from a continuous and substantial development program that started almost 10 years ago. The program's objective for the industrial sectors, which is referred to as an "emergency plan", is to create 220,000 new jobs by 2015, and it is well on course to meeting this target. Morocco is pursuing the vision "to become to Europe what Mexico is to the US", as its investment promotion agency (MIDA) has stated it in its strategy papers. 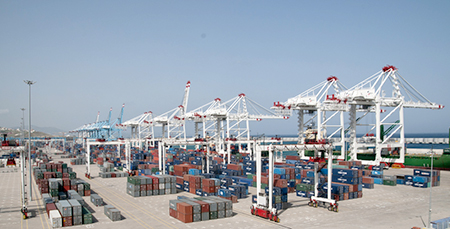 Tangier Med Port at the Strait of Gibraltar only 14 km from Europe – from 2015 it will be the largest Mediterranean Port and the largest in Africa.
Photo: TMSA

A comprehensively enlarged motorway network covering almost 1,800 km, the first African high-speed train from Tangier to Casablanca and the construction of the largest Mediterranean port in Tangier are impressive infrastructure projects that will be finalized within the next two years. Substantial development programs for key industries such as automotive, aeronautics, electronics, off-shoring, as well as for tourism, agro-food processing, logistics and ICT are also driving the country's structural change. And ambitious plans to become a major producer of solar and wind energy – and even an exporter of clean energy to Europe – are under way. New free zones and integrated industrial parks dedicated to the needs of specific sectors and types of activities are facilitating investment projects.

Macro-economic indicators underpin confidence in Morocco's development: inflation has been kept below 2 percent over the last six years, average GDP growth has been 4.5 percent over the past 10 years, and public debt has fallen continuously to a mere 52 percent of GDP, despite the expensive infrastructure investments. In addition, Morocco allows 100 percent FDI, and a range of incentive programs encourage investment plans.

A common driving force behind recent investments in Morocco has been the shift of production operations from Spain or Portugal, where wages are eight times higher than in Morocco. Plants have also been transferred from central and eastern Europe to Morocco, as subsidiaries in CEE countries are faced with rapidly rising labor costs. Instead of moving further east, which would have made logistics difficult, they have headed south.

Companies operating plants in Tunisia or Egypt choose Morocco primarily with the aim of balancing their risks by establishing a second foothold in the region. They fear the spirit of rebellion might reach their factories, and some have indeed been confronted with radical conflicts within their work forces.

The companies that have invested in Morocco actually consider the kingdom more stable than its north African neighbors and even safer than some eastern European countries. Nevertheless, the whole region and its Arab countries are undergoing a process of radical transformation that might affect not only themselves but the entire region. Furthermore, Morocco also faces dissatisfaction among its people.

The major difference, however, is that the demonstrating Moroccans focus more on the speed of reform than on the political system as such. A major reason for this is that King Mohammed VI enjoys a very good reputation and a high level of support among the Moroccans, which is the key difference to some other Arabic countries.

The fact that the process of democratization is proceeding along less radical lines in Morocco than in Tunisia or Egypt probably increases its chances of success. Many independent institutions confirm the positive assessments in economic and political terms and view Morocco as an exception. Rating agencies maintained their positive ratings even during the turbulence of the Arab Spring in 2011. 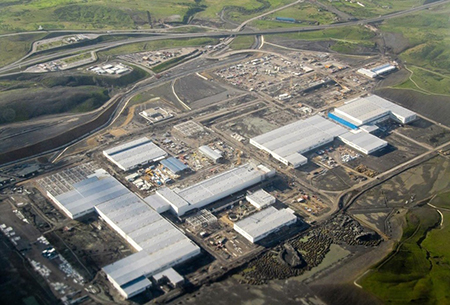 Just one year ago, Renault inaugurated its new plant in Tangier, close to the new Tangier Med Port, and its car terminal. With an investment volume of US$1.2 billion and a capacity of 400,000 vehicles, it is not only the largest car assembly plant in northern Africa but also exemplary in terms of its environmental impact: 98 percent carbon reduction, no industrial waste water discharges, 70 percent lower water consumption – levels that have never been reached by a bodywork assembly plant. This is achieved through innovative manufacturing processes, the use of renewable energy and optimization of the water cycle. The plant started with an output of 170,000 vehicles using Renault-Nissan's B0 platform and is expected to reach 400,000 by 2015. Carlos Ghosn, Renault-Nissan's CEO, has announced that there are good prospects of Nissan joining Renault at the newly built "Tangier Automotive City" in the near future. 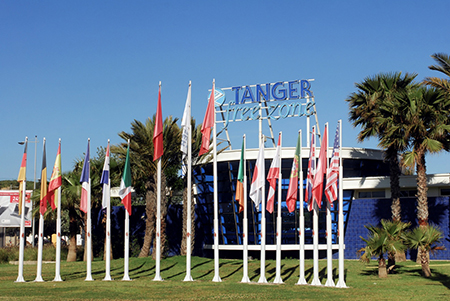 Sumitomo operates six plants in Morocco with a total work force of 15,700 FTEs. Activities concentrate on wiring harnesses for supply to Renault-Nissan, PSA, Fiat and Volkswagen. Sumitomo intends to build two more plants by 2014, increasing the work force to 20,000 FTEs. Key locations are the Tangier Free Zone and the Atlantic Free Zone in Kénitra, close to the capital, Rabat.

Leoni employs more than 8,500 people at eight plants located mainly in and around Casablanca. The most recent investment was a new factory in Berrechid with a work force of 700 FTEs. A considerable proportion of the manufactured wiring systems is exported to OEMs in Portugal, Spain, France and Germany. These are aiming to increase their capacities as they move them out of central and eastern Europe. 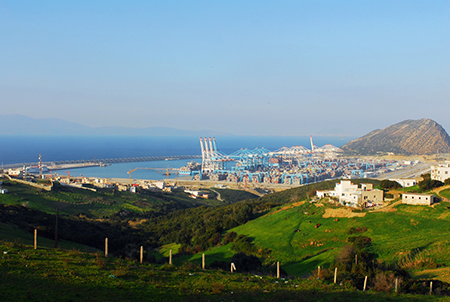 Tangier Med I – the first phase of the new Mediterranean port – the second is under construction and will extend the capacity to 8.5 million containers by 2017.
Photo: TMSA

Delphi's two plants are both located in Tangier and employ a total work force of 5,300. Delphi benefits in particular from its role as a supplier to the new Renault plant. It is considering an additional plant with a work force of 3,000 in the Atlantic Free Zone, Kénitra. 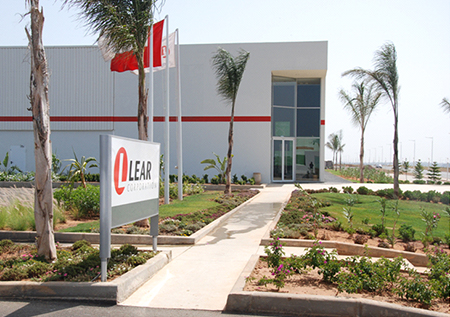 Lear’s new production and R&D site in the Rabat Technopolis – the US$44m R&D and production unit includes the first clean room in the Middle East and Africa with class 10 certification.
Photo: technopolis

Lear: Investing in R&D in Morocco

Lear has a plant in Tangier and a production and R&D center in Technopolis Rabat. Lear Electronic Division invested $44 million in the Technopolis site for developing and producing electronic distribution systems for cars, with a work force of 400.

Yazaki has invested $70 million in Morocco, with two plants in Tangier and Kénitra employing more than 4,500 people.

Hirschmann Automotive: The most recent investor from Austria

Austrian wiring systems manufacturer Hirschmann set up a production plant in the Atlantic Free Zone, Kénitra, in 2012. Total investment amounted to $25 million, and the workforce will comprise 1,200 FTE.

In a shift from the Czech Republic to Kénitra, Faurecia has set up seat trim operations in Morocco, supplying Volkswagen and Renault in Spain and Portugal. This investment combines textile traditions in Morocco with developments in the field of automotive equipment and accessories.

The Italian engineering group operates in Morocco with 50 engineers and serves clients in the automotive and aerospace industries. Local clients include Visteon, Fabi Bourbon group and Akka Technologies.

Components and thrust reversers for aircraft engines are produced by Aircelle's plant for supply to Rolls Royce. The company has invested $21m in the 20,000-sq.-m. plant situated close to Casablanca with a work force of 500.

By investing $15m in three sites in the Rabat area, French Zodiac Aerospace has established a strong foothold in Morocco. Its facilities include an R&D site for embedded computer technology in Rabat's Technopolis. The company has declared its intention to set up a long-term engineering base in Morocco.

Additional investment projects in the aerospace sector include Lisi Aerospace, with a stake of U$12m in the Nouasseur Aeropôle close to Casablanca, and Matis Aerospace – a joint venture of Boeing and French Labinal – with an investment volume of US$60m.

Andreas Paulicks is a partner in the Frankfurt office of PM & Partner Marketing Consulting GmbH.

Technopolis – an industrial manufacturing and technology park focused on high-tech industries such as microelectronics, biotechnology and nanotechnology.
Photo: technopolis