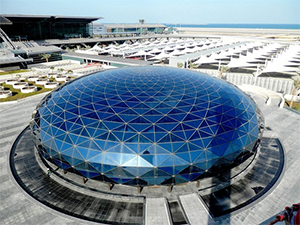 ArabianBusiness.com reported on January 14th, 2013, that Doha, Qatar's new airport, Hamad International, will open for passengers April 1st. Carriers not operating passenger lounges will be the first to use the new airport, followed by Qatar Airways and other international carriers in due course.

Phase one of the new $15.5bn airport (picture shows the airport's mosque), notes the article, is slated to handle over 28 million passengers a year, with the capacity expected to more than double by the time the airport is fully operational in 2018. The current Doha International Airport handles almost 20 million passengers a year, with over 80 per cent of the passenger traffic generated by Qatar Airways alone.

Meanwhile, construction will begin this year on a new international airport for Beijing, in Daxing, that is slated to open in 2017. The new facility will be designed to handle 130 million passengers annually, significantly more than the current busiest airport – Atlanta's Hartsfield-Jackson International. The new airport will cost an estimated US$11 billion.

TONGZHOU, Jiangsu Province, China -- Caterpillar Inc. (NYSE: CAT) announced January 9th the joint opening of a state-of-the-art proving ground and a large wheel loader manufacturing facility in Tongzhou, Jiangsu Province. The new operations support the company's growing operations in China and other growth markets. As part of Caterpillar's increasing research and development presence in the Asia Pacific region, the Asia Pacific Proving Ground (APPG) provides validation and product development services for Cat® machinery produced in the region. The large wheel loader manufacturing facility is designed to suit the needs and requirements for quarry and mining applications in China and growth markets. The Cat® 986 large wheel loader, which is produced at the large wheel loader facility, was designed at Caterpillar's Wuxi R&D center and validated by the APPG.

"Caterpillar takes a long-term view of the market in China, and our focus on product development here will enable our strategy to win in China," said Steve Wunning , Caterpillar group president with responsibility for Resource Industries. "As we expand our portfolio of locally designed and produced machines in China, Caterpillar is better positioned to serve our customers in China and around the globe." The Cat 986 large wheel loader is the first Cat machine designed, validated and built in China specifically for China and global markets. The machine was displayed at the recently concluded bauma China 2012, the most renowned trade show in the construction industry in China. Featuring the largest exhibit ever for the company, Caterpillar displayed nearly 50 machines and engines at bauma China in Shanghai, including a Tier 3 C7.1 ACERT Industrial Power Unit, which was also developed at the Caterpillar Wuxi R&D center and validated in various machines by the APPG.

Strategically located in Tongzhou at the mouth of the Yangtze River to the East Sea, the Tongzhou site provides a logistics advantage in terms of shipping machines from the Asia Pacific region and from inland China to the APPG for testing, and ultimately, the shipping of complete machines to marketplaces in China and around the world. In addition, the Tongzhou site is located near several of Caterpillar's existing manufacturing facilities in China, as well as the majority of the company's existing supply base in China.

With these new facilities in operation, Caterpillar now has 23 existing manufacturing facilities, four new facilities under construction, four R&D centers and three logistics and parts centers, employing more than 15,000 people across the country.

"This is a new important step as Caterpillar continues to systematically strengthen its business model in China," said Qihua Chen , Caterpillar vice president with responsibility for China Operations and China country manager. "Caterpillar is committed to enabling customer success by providing the lowest owning and operating costs in the industry. We support our customers in China that take part in infrastructure development, energy production and resources utilization."

NSK Announces Plans to Establish a Manufacturing Subsidiary in Mexico

ANN ARBOR, Mich. -- NSK announced that the company would establish a manufacturing subsidiary in Mexico in order to better deal with the expansion of automobile production in that country, and in order to keep up with expected growth in the automotive segment among the North American Free Trade Agreement (NAFTA) countries of the United States, Canada and Mexico.

Through the establishment of this subsidiary, NSK will be better positioned to provide quality products such as automotive bearings in a timely manner. It will also give NSK increased capacity in addition to its existing plants in the U.S. in supporting NSK's plans to expand its North American automotive businesses. By increasing the production capacity of automotive bearings in the Americas, including Mexico, NSK aims to build a stronger corporate ability to deal with exchange rate fluctuations, as well as to further expand its business in North America.

Overview of the manufacturing subsidiary

The company will be called NSK Bearings Manufacturing Mexico S.A. de C.V., and will be located in Guanajuato, Mexico. It will be represented by Steven Beckman , Senior Vice President of NSK Corporation. Date of establishment is planned for January 2013, and its business areas will focus on the manufacture and sale of automotive bearings. Its capital is approximately $5 million USD (as of April 2013), and its investment breakdown is 100% NSK Ltd.

Ma’aden President and CEO Engineer Khalid Al Mudaifer said the new sheet products integrated rolling and surface treatment complex is an exciting step for Saudi Arabia as it enters the global aluminum industry and demonstrates the power of the partnership created by Ma’aden and Alcoa.

“As we break ground today, we do so knowing that our joint venture with Alcoa has a vote of confidence from one of the most prestigious manufacturers in the global automotive industry. From this foundation we will see the growth of an industry that will create opportunities for career development and downstream business growth for Saudi Arabian citizens for many generations to come,” Engr Mudaifer said.

Alcoa Chairman and CEO Klaus Kleinfeld said that the addition of the new automotive sheet products capabilities was a natural extension of the government’s vision to develop world-class downstream manufacturing enterprises in Saudi Arabia, and further leveraged Alcoa’s expertise in the market.

“Today we are seeing the tremendous potential of the Ma’aden-Alcoa joint venture become reality. Alcoa has been bringing innovative solutions to the automotive industry for 100 years and together with Ma’aden, we are now positioned at a new intersection of commerce in the Middle East to capture profitable growth. Every individual who has played a role in achieving this historic milestone today should feel proud of their contributions, and I thank them,” Kleinfeld said.