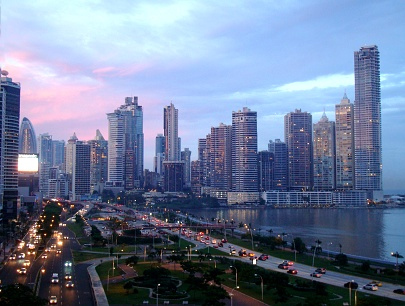 anama has been considered a logistics center since its discovery in 1513. Its location and native design provide unparalleled and unique geographical advantages. Above all, it has access to two seas: the Atlantic and Pacific oceans are 80 miles away from each other. Panama's geographic location at the center of the Americas links the North to the South and West to the East; these features allowed for the construction of the Panama Canal and its subsequent expansion. With the construction of the Canal, multiple international developments followed suit, categorizing the country as a center for commercial activities, such as banking and finance, insurance, international trade, communications and distribution. The development of Free Zones in Panama has permitted the establishment of regional headquarters and multinational corporations engaging in the business of logistics. Additionally, new fiscal, labor and trade incentives have been instituted in order to propel the establishment of foreign corporations. Panama has the most efficient and modern port infrastructure, inter-oceanic railway, transistmic highway, airports in both the Pacific and Atlantic sides, air hub for both passengers and cargo, all of which allow for the development of competitive international logistics business. Remarkably, Panama's commercial and geographic positioning has opened the doors to the American, Asian and European markets.

We have observed that there is a continued interest, as well as an increase in investment, in the logistics business on behalf of national and international investors and developers. New areas of development for logistics parks are being established in different parts of the country. In the Atlantic area, there are sectors specifically developed for logistics purposes with models that integrate expeditious receipt, release and clearance of goods, services and cross-docking specialized storage. In the Pacific area, we find logistics sectors in Panama City and its surrounding areas.

In 1948, what is now considered the largest free zone in the Americas and the second in the world was founded: the Colon Free Zone. Given the advantages that Panama has for the logistics sector, in recent years we have seen a transformation not only in the legal field that allows the establishment of more zones, but also in the business sector, as there is currently a boost in construction zones for the establishment of companies focused on the production of goods and services, high technology manufacturing, distribution, research, higher education, as well as logistics, environmental issues, and health.

There is no denying that the logistics services are efficient in Panama due to its legal framework and tax incentives, as well as by its geographical position. In addition to this, the Panama Canal expansion promises to change the flow of world trade and thus, the logistics business. Its ability to reduce costs and transport time classifies Panama as the main protagonist of this new structure of trade flows.