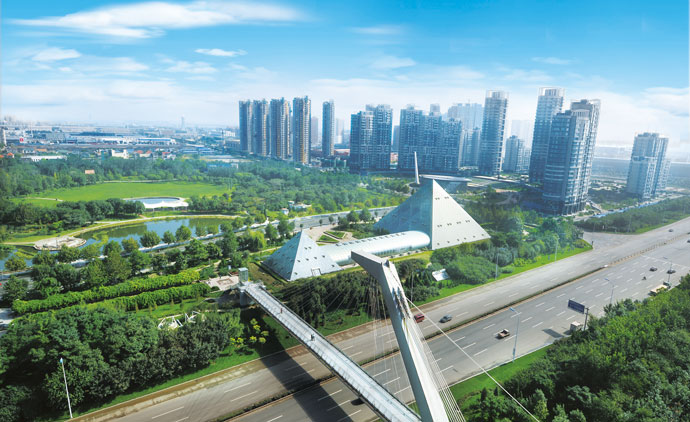 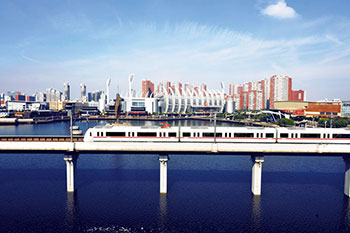 f the five countries attending March's BRICS summit in South Africa, only one could boast a growth rate significantly higher than 5 percent. That was China, and although its current growth of about 8 percent is less than half the 20-percent rate seen in headier days, it goes some way to explaining why it is still attracting serious money amid a worldwide slump in foreign direct investment (FDI).

But that's nothing compared to the FDI plunges experienced by the US, Japan and European countries, which suffered 90 percent of the damage as global FDI fell to $1.3 trillion from $1.6 trillion last year, according to the Global Investment Trend Monitor belonging to UNCTAD, the UN's trade and investment think tank. The overall fall meant that 2012 was the first year in which developing nations attracted more FDI than the developed world. 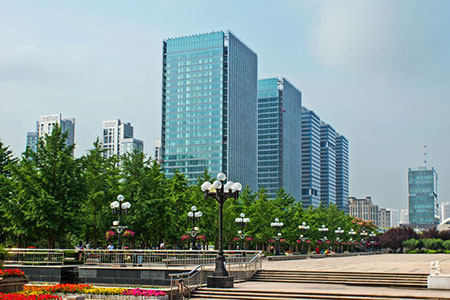 Modern Services District in TEDA
Photo Courtesy of He You An

Lang's prudence is underwritten by continuing large-scale investments from across the spectrum, with technology and the service sector making particularly strong showings recently. For example, Dow Chemical has invested over $1 billion in logistics and chemical projects at TEDA while Johnson Controls set up a $200-million new energy venture. Denmark's Haldor Topsoe has newly allocated $200 million to a TEDA-based catalyst project. General Nice Group, a resources and logistics firm, has invested over $50 million in establishing a presence at TEDA, while China Industrial Leasing input an investment of $50 million in the zone. The geo-engineering firm OYO Corporation set up a joint venture with an investment of $6.5 million. World-recognized security software firm McAfee also recently set up a new plant at TEDA. This year has also seen increases in TEDA investments by Samsung (an extra $110 million); Japanese drink maker Pocari (a further $65 million); Shell Lubricant (an extra $40 million) as well as Belgium's Betafence.

According to the Ministry of Commerce, manufacturing is still attracting increasing FDI, but it is being outperformed by the service sector. 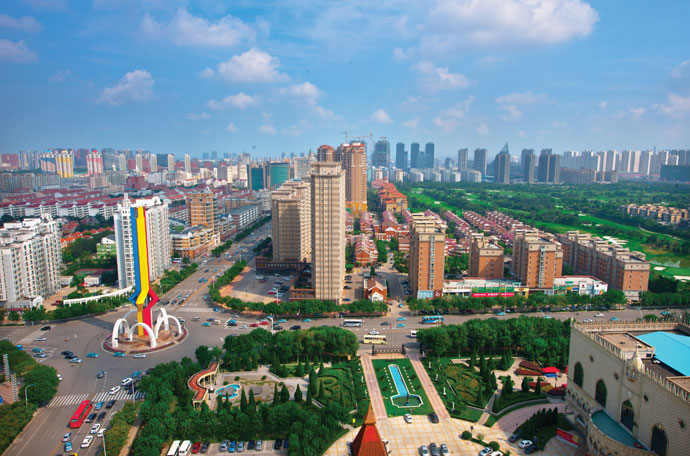 "Twenty years ago, all FDI was for eventual export," says Chao. "Today, I would put it at 70 percent for the domestic market and 30 percent for export. With the middle class growing at between 10 and 15 percent per year, almost every multinational wants a piece of this action. FDI is now going to products and services that are higher up in the food chain. Before, FDI was for textiles and low-tech manufacturing," he continues. "Now, FDI is for manufacturing and research and development for nanotechnology products, advanced automobile fuel systems, aviation, biotechnology and even medical research and clinical studies."

However, Ravi Ramamurti, director of the Center for Emerging Markets at Northeastern University, cautions about writing off China's export machine, which has driven most of the past 30 years' growth, too quickly.

"The death of China as an export powerhouse is vastly exaggerated. No other country is as attractive a market or as attractive a source of talent as China. Only one thing has changed: Chinese wages have risen and the supply of cheap labor for low-end work is disappearing, particularly in the coastal provinces," he says. "Companies in these locations are automating rapidly and moving to more sophisticated tasks. The Special Economic Zones will continue to thrive, but as centers for higher value-added products, not low-end products." 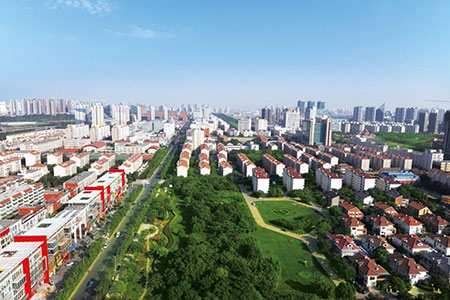 The Ministry said FDI from the US and Japan was down about 20 percent in January year-on-year, but FDI from the EU was up 82 percent, including a massive 4,000-percent jump in investment from Sweden and a 350-percent increase from Denmark, both leaders in the high-tech and green energy sectors.

"For a country like China that already has many MNCs investing in it, the key is to keep those companies happy so that their strategies evolve as China evolves. I think this is happening to a large extent, which is why inward FDI into China is still strong," he says. "China has become even more important to Western MNCs as its middle class grows, prospers and consumes more. No global firm can expect to do well in the long run without a significant share of the Chinese market."

TEDA is among the first generation of development zones and is ranked top overall among all China's industrial parks for 15 consecutive years. It also comes top for individual indicators such as GDP, Total Industrial Output Value and Actually Utilized Foreign Capital. In 2012, TEDA's GDP reached $35 billion, with the total industrial value exceeding $113 billion and showing a steady upward year-on-year curve. The zone has about 5,000 foreign-invested companies (including 85 Fortune 500 companies), with total foreign investment of $79 billion, and more than 10,000 Chinese firms.

But it faces stiff competition from a raft of newcomers springing up across China that are all keen to grab as much FDI for their own region as possible. In particular, development zones in central and western China can offer improving transport links as well as cheaper land and lower labor costs than their counterparts in the east.

"We have felt the pressure right now on the East Coast of China because all manufacturing industries face rising labor costs. The right way out is to upgrade the industries by developing high-end, high-quality, high-technology products and to devotedly promote a green economy," says Lang.

"Before, there were relatively few of these industrial zones, centered in the major cities of Shanghai, Beijing or Shenzhen. Today, there are dozens of these zones from Xi'an in western China to Harbin in northern China," says Chao.

"These local governments must think of new and innovative ways to attract FDI: tax incentives, reduced land leases, an educated workforce, and even free power and water use. These industrial zones are also marketing their wares. I'll often visit trade shows in the US and see booths from the local industrial zones from obscure, unknown cities in China trying to attract FDI. Competition is cutthroat.

All those industries have enormous appetites for specialized parts and labor, and for services such as logistics, customs and shipping, which are easier to fill inside the economic zones. The large zones have clustered these small companies together, and access to their services makes it much easier for foreign firms to produce in China. 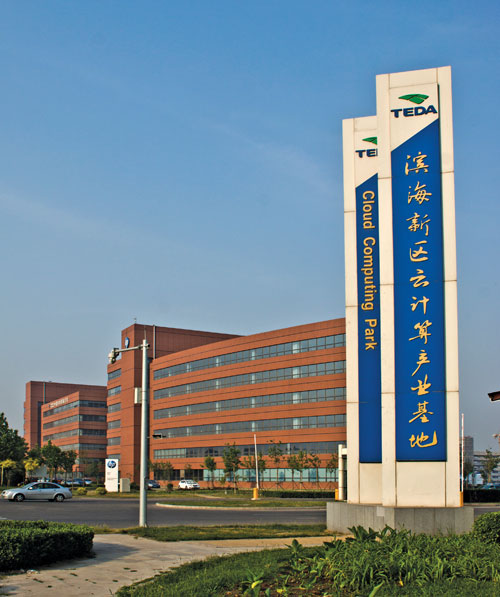 Binhai Cloud Computing Park
Photo Courtesy of He You An

TEDA is also targeting fast-growing tech sectors, sucg as cloud computing, which has high barriers to entry because companies require a specialized power supply, ample bandwidth, reliable cooling and data backup systems, as well as facilities that are secure from flooding, fire, earthquakes and other natural disasters. China's market for cloud computing is worth alsmost $10 billion, according to TEDA, which has established the Binhai Cloud Computing Park.

"In the initial stages we were so eager for projects that we were not very selective, but in the second phase we focused on productivity and efficient use of land, so we selected companies rather than accepting a random choice," says Lang.

"We are in the third phase now, where the focus in placed on tech-savvy, market potential, R&D capabilities and high-end talent. We are now focused on becoming the best choice for technology-oriented companies. We have made a great effort to attract top employees and have them stay in TEDA, and we are working to improve the living environment inside the zone. The ability to offer a high quality of life and career path will be key for our future," says Lang. TEDA expects to attract $5.5 billion in FDI this year, representing 10 percent year-on-year growth.

Admittedly, rising salary costs are having an impact across the country. According to Bloomberg, the wage differential between inland and coastal regions is down by more than half since 2006. That pressure is set to intensify because the supply of young workers is forecast to shrink by 20 million to 505 million by 2015 and a further 22 million by 2020. 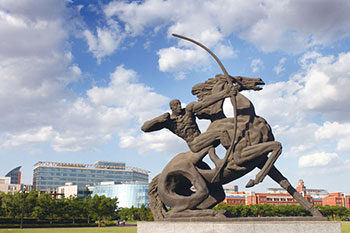 "Structural changes are taking place that are sometimes masked by a sole focus on China's diminishing cost advantage. Higher wages are sure to come, and are in fact a political imperative, but increasing efficiency can offset them at least partly."

Ramamurti agrees. "Hong Kong and Singapore may offer the closest example of what happens as a location develops and prices itself out of low-end manufacturing," he says. "It first migrates to higher-end manufacturing, and then to higher end servuces. While this happens, foreign companies continue to pour FDI into the country."

A condensed version of this article appears in the May 2013 issue of Site Selection magazine.