As Liverpool marks the 50th anniversary of the Beatles, a
$15-billion redevelopment scheme could be the city's next big hit. 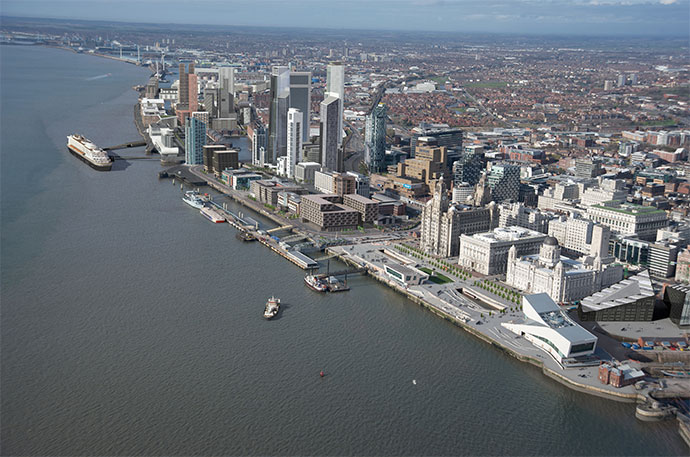 "We look forward to bringing forward the developments at Wirral and Liverpool as one huge scheme that will see the area become the ocean gateway to the North West," said Lindsey Ashworth, development director at Peel, when Liverpool Waters was announced in 2007. The vision continues to gain traction in 2013, with final permitting approval coming just last month.
Images courtesy of Rust Studios, www.ruststudios.co.uk
by ADAM BRUNS
A 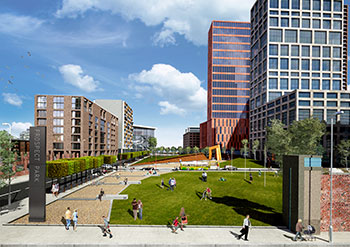 Liverpool Waters, covering 150 acres (60 hectares), is one half of a Peel Waters scheme which will comprise a total investment by Peel of £10 billion and will result in the regeneration of 650 total acres (263 hectares) along the docks in Liverpool and Birkenhead.

vision many years in the making aims to take both sides of the River Mersey's waterfront from myopia to utopia.

Lindsey Ashworth, development director for Manchester, UK–based property, infrastructure and development company The Peel Group, is not one to mince words. And he's had a few choice ones. In late 2010, even as he saw signs of hope and common sense, he called the UK's permitting scheme "a ridiculous black hole of a planning process." And he's been known to make a certain gesture in the general direction of UNESCO and its overprotective rules protecting heritage sites.

In a talk in Atlanta a couple weeks ago to help promote Liverpool's forthcoming International Festival of Business, he said Liverpool's stagnating growth and dropping population a decade ago were due in part to "difficult politicians at the time … thank God they're all gone." The media didn't help either, he says in an email interview, as they were in " 'Let's destroy Liverpool' mode."

But The Peel Group has persevered with acquisitions over the past two decades and £50 billion (US$76 billion) worth of proposals for the "Ocean Gateway" of Northwest England encompassing the stretch from Liverpool to Manchester. In metropolitan Liverpool, which was the 2008 European Capital of Culture, those plans have taken the shape of two projects — Wirral Waters and Liverpool Waters — that might as well be one, as they frame a new vision of a waterfront landscape dominated by tech, shops and condos instead of pubs and freighters.

"I started discussions with both Wirral and Liverpool Governments around 2007," says Ashworth. "Under the previous economic regime all surrounding local governments would have objected to such dominant projects on the basis of 'If it's not going to be a project in their area then they will try to stop it being located in a neighboring area' — a very small-minded and myopic point of view that was holding back the region."

But Ashworth and company have opened one set of eyes at a time, starting at home and ending as far from home as you can go.

"Jo Anderson, the mayor of Liverpool, was the first to help break this 'objection habit' by going over to Wirral to shake the leader of Wirral's hand and pledge support for Wirral Waters," says Ashworth. "Because there were no objections, our UK government decided that there would be no public inquiry, and planning permission was granted for Wirral Waters."

On the other side of the Mersey, however, things weren't quite so smooth.

"With Liverpool Waters, which had parts within a World Heritage site, we had objections from English Heritage and UNESCO, so a delay of nearly 2 years followed," says Ashworth. "They both put every conceivable obstacle in Peel's way. Their final position was, quite simply, if we put foundations underground then we might disturb archaeological remains, and if we built above ground then we might block a view of a heritage building. In other words, they would not agree to any redevelopment of redundant docks."

But the support of the Liverpool and UK governments, driven by the voices of the returning populace, has prevailed, and Liverpool Waters was granted planning permission just over a month ago.

"Thus, Liverpool Waters and Wirral Waters, with 40 million square feet [3.7 million sq. m.] of mixed-use permitted floor space, are the largest regeneration schemes of all time to get planning permissions" in the UK, says Ashworth, "and more importantly, without public inquiries.

"The planning system in the UK has got itself in to state whereby it's almost impossible to get large permissions," he explains. "The cost and time involved means that it's too big a risk to start the process where failure looks possible. Many developers go bust in the process. It needs a sensible central government to cut through all the planning red tape and bureaucracy.

"Fortunately," says Ashworth, "Prime Minister David Cameron came to my sites, saw the obvious benefits, particularly to job creation, invited me to No. 10 Downing Street and permissions were given," due in no small part to the establishment of an enterprise zone and its attractive tax credits.

Or, as Ashworth quipped to big laughs from his Atlanta audience, "I met him and made it clear it would be on his head if it failed, and we'd publicize it."

The privately owned Peel Group's holdings already are not insubstantial, totaling some £6 billion, including ships, wind farms, four airports and about 5,000 employees. Central to the group's vision for Northwest England was its acquisition of Manchester Ship Canal Co. in the 1980s, which not only enabled collaboration to prevail between the canal and the Port of Liverpool, but also included vast tracts of land.

"Following Peel buying the Port and Airport of Liverpool, we looked at what we could further do to improve the Liverpool Region," says Ashworth. "Without proper facilities in place for the movement of goods and people you can't make a city work. We have invested heavily in both the port and the airport, so we have the confidence to rely on them now."

Next comes the window dressing, as it were — a visual and lifestyle counterpart to the existing and latent economic power of the region, typified by one of the busiest bioscience clusters in Europe centered around the University of Liverpool, which soon plans to open a new biosciences incubator.

"Liverpool and Wirral are the gateway to the Northwest, and we wanted to do something that would be visually dominant to the ships that came into the docks — it would be a sign of prosperity and ambition," says Ashworth of the two Mersey-based tall-building developments that subsequently came into being. "I then gave the name of 'Ocean Gateway' to the western part of the Northwest to raise its profile, which we adopted eastwards through to Manchester. Peel alone [has] over £50 billion of investment proposed for this entire Ocean Gateway corridor."

Cruising into that corridor is a boatload of Chinese cash. Time was when "Shanghai" was a slang verb with shady connotations of swindles and ne'er-do-wells. But in Liverpool it might instead mean a city to emulate and welcome.

"My inspiration for Liverpool Waters and Wirral Waters came from the beautiful waterfront of Shanghai," says Ashworth. "Some inspiration came from Vancouver, New York and Hong Kong." He says Shanghai's growth has shown how redevelopment can take place over time, and how "tall buildings developed on the waterfront really make it come to life."

At the same time, he says, "This isn't a mini-Shanghai. It's its own place," with its own unique plans for live-work-play attractiveness.

The Chinese connection derives from Peel's support of the Liverpool pavilion at the Shanghai World Expo in 2010. Ashworth thereafter created the Peel International Trade Centre as a landing place for Chinese and other companies in the UK.

"It has 2.5 million square feet [232,250 sq. m.] of floor space in four buildings, and we expect over 1,000 companies to take space" selling everything from solar panels to fuel pumps to the wholesale market, said Ashworth in Atlanta. "So many companies want to trade in Europe and can't find a venue to do it. The closest is in Poland … and it's owned by a Chinese consortium."

"I got planning permission for this and now have a Chinese joint venture partner fifty-fifty," explains Ashworth of a tie-up with The Sam Wa Group formalized in summer 2012. "This partnership will inevitably extend into other parts of Wirral Waters and Liverpool Waters. Of course we have had no choice but to look to other countries for finance for our projects given the mess banks have got us into, so China is attractive. It's unlikely that banks in the UK will provide finance on reasonable terms for many years, and we simply cannot wait."

It's not just China, however. Ashworth is also in discussion with institutions in South Korea, Hong Kong, India and other emerging economies. There might even be room for some US-based funds — hence Peel's role in the Liverpool Vision stops in Boston and Atlanta last month. And the company partners with REEF of Germany in running the Port of Liverpool. "If we just used our own money, it would take a thousand years," says Ashworth. "So we're bringing in investors."

Ashworth says transport connectivity is one of the most appealing investment attractions of the region, with two airports and a two-hour rail connection to London that soon will be faster. Peel's partnership with its area is clear, something Ashworth clarified in Atlanta, even as he reiterated he didn't have to.

"I don't have to say Liverpool is good," he said. "We chose where to invest our money, and we've chosen the Liverpool region," which he sees drawing back the population it lost and punching well above its weight in economic development terms.

"We're a big company, and we put our money where our mouth is," said Ashworth. "It's a place to grow."

One can't help but imagine that's what the Beatles thought when they were gigging hundreds of times at the Cavern Club and other venues in their early years as a band. Word has it they turned out pretty well. Peel and its Northwest England brethren have likewise staked out territory with years in the trenches, and hope just a dollop of Fab Four magic will make the Waters along the River Mersey sparkle again. 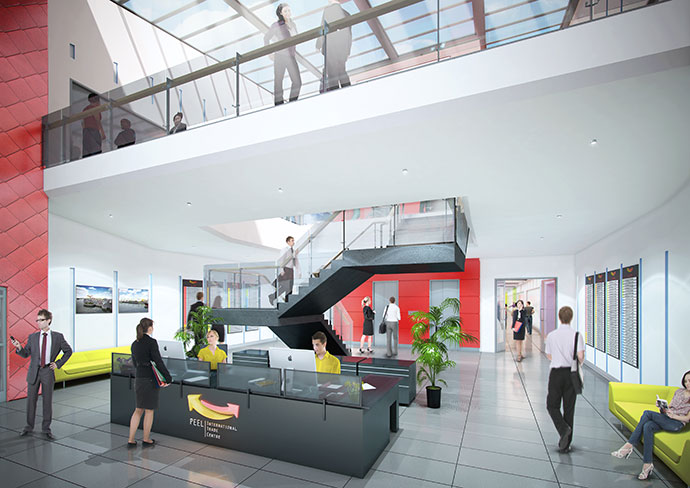 The Peel International Trade Centre, part of the Wirral Waters project, is aiming for a Spring 2015 completion date and is a 50/50 joint venture between The Peel Group and Chinese investors. The project is expected to attract hundreds of companies from China alone — hence its red-and-yellow color scheme.