Brunei's first pharmaceutical manufacturing plant is set to be operational by the year-end once it has acquired the necessary halal certifications from the government.

In an interview with The Brunei Times last week, Edward Ko, the managing director of Simpor Pharma, said final preparations are under way for the production of halal generic drugs and nutraceuticals at its state-of-the-art facility at the Lambak Kanan (East) Industrial Estate.

He revealed that the company is currently in the process of acquiring the halal certification as well as conducting machine validation by its technicians in hopes that it could initiate production tentatively by the end of this year.

Once operational, he said, the company hopes to capitalise on the growing halal market in region, citing the Middle East as a potential destination for export. It is also looking at exporting to Malaysia and Indonesia.

Ko said that Viva Canada has been looking to expand into Muslim countries and has chosen to set up a halal pharmaceutical plant in Brunei due to its political stability and transparent business practices.

"Unlike other parts of the Muslim region, Brunei has a safe and healthy environment for us to expand," Ko said.

He also said that the company wanted to leverage the strong reputation of Brunei's halal certification for the production of halal pharmaceuticals that would cater to the 1.6 billion Muslim consumers globally.

"We're also targeting the non-Muslim consumers because halal is for everyone. The halal brand has a good reputation for being safe for consumption," he said.

The foreign direct investment (FDI) is part of Brunei's initiative to become a producer of halal pharmaceuticals in the region, and that the industry is hoped to be one of the strongest economic diversifiers in the sultanate that would open up more job opportunities for the locals.

The company is set to provide more than 250 jobs to locals by the end of 2014, who will make up 90 per cent of its workforce.

Ko added that the the firm is investing heavily in quality training and knowledge transfer to ensure long-term jobs secured by Bruneians, from quality control managers to quality control technicians to research and development technicians.

"We will bring in people from outside who will train local managers for these early stages," he said.

The company also sends its staff for training at the Viva headquarters in Canada.

Ko said that Canadian firm is known for its technology patents, which are also utilised at the Simpor Pharma plant to ensure the highest quality manufacturing standards and high production yield.

The firm is looking at producing cosmetics in the near future.

The Simpor Pharma plant is the first of many FDIs that will be allocated at the Industrial Estate facilitated by the Brunei Economic Development Board.

In 2010, Brunei became the world's first country to issue halal pharmaceutical guidelines put together by a group of government agencies on the production of Halal pharmaceuticals, including the use of alcohols and animal products. 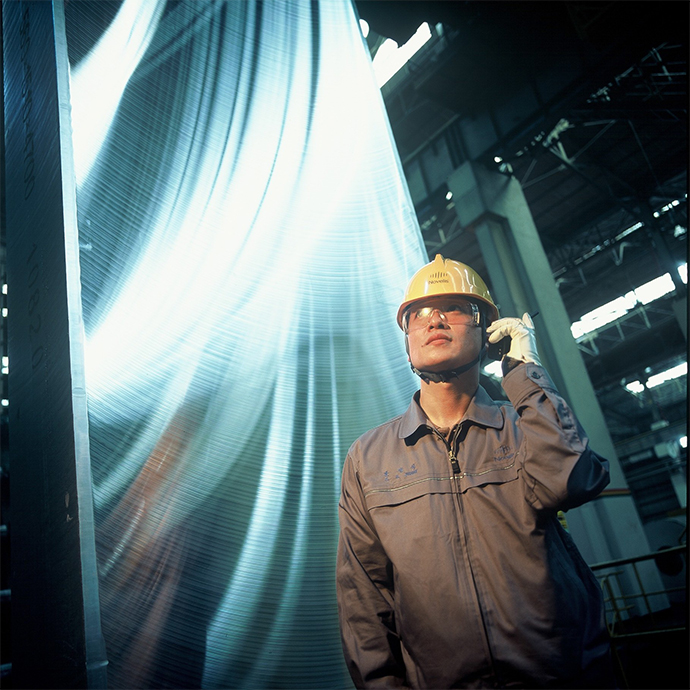 A worker stands beside an aluminum ingot at the Novelis plant in Yeongju, South Korea.

Novelis, the world leader in aluminum rolling and recycling, announced October 10th the completion of a two-year, $400-million expansion program in South Korea. The expansion of its Yeongju and Ulsan plants increases the company's production capacity in the region by more than 50 percent to approximately one million metric tons of aluminum sheet per year.

"Investing further in Korea has been a key element in the company's global strategy," said Phil Martens, President and CEO of Novelis. "Asia is the largest and fastest growing region in the world for aluminum, and this expansion allows us to maintain our leadership in this dynamic region across key markets such as beverage cans, consumer electronics and automobiles."

Novelis began the expansion of its aluminum rolling and recycling facilities in 2011 to meet the rising demand for flat rolled aluminum in high value-added products in the Asian market. The expansion includes a hot rolling finishing mill, cold rolling mill, pusher furnace, high-speed slitter and annealing furnaces, in addition to the previously commissioned fully-integrated recycling center at Yeongju.

"The expansion enables Novelis to expand into new markets within the region," said Shashi Maudgal, Senior Vice President and President, Novelis Asia. "We can now supply coils to our new automotive sheet finishing plant in Changzhou, China, which is expected to commence production in mid-2014. Furthermore, we can now pursue new business opportunities in high value-added markets like consumer electronics where a high-quality surface finish is required." 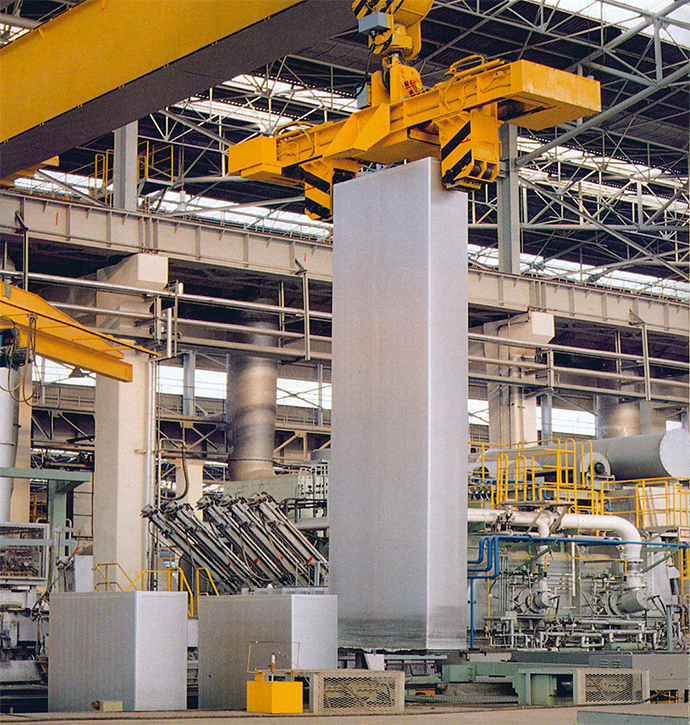 Aluminum ingots at the Novelis plant in Ulsan, South Korea.

The demand for aluminum in the Asian automotive market is expected to exceed the 25 percent compound annual growth rate projected globally over the next five years, as more automobile manufacturers move to build lighter, more fuel-efficient vehicles. The company's expansion in South Korea will help it meet this rapidly growing market.

Novelis has a regional headquarters office in Seoul, operates four plants in South Korea, Malaysia and Vietnam and will commission its new Chinese facility in 2014. Currently, Novelis employs approximately 1,800 people in the region including 200 new staff added as part of this expansion.

Construction of the facilities for the third group of twelve key projects scheduled for this year got underway recently in Changzhou National Hi-Tech District (CND), encompassing a total investment of 3.725 billion yuan. Two projects - the facilities for Syn-The-All New Medicine and Xinri New Material - each commanded investments exceeding 500 million yuan, respectively, demonstrating the attractiveness of the district as a manufacturing location, the scale of investment that is possible there as well as the high level of production capability that is available.

STA Pharmaceutical Hong Kong Limited and Shanghai Syn-The-All Pharmaceutical Co. Ltd., two wholly-owned subsidiaries of NYSE-listed WuXi AppTec, have jointly invested in a new pharmaceutical production and R&D center in Changzhou Binjiang Economic Development Zone. Phase I of the project calls for an investment of US$98 million and registered capital of US$72 million. The commercial viability of the project has been submitted for approval and some early-stage preparatory work is underway, with the first batch of drugs expected to start rolling off production lines by the second quarter of 2015.

While developing an advanced manufacturing industry, CND also strives to create a modern high-level service sector, by leveraging its existing industrial bases and its advantageous location alongside or near key transportation hubs. Xinlong International Business City, doubling as both a science and technology center as well as a financial center, has already signed agreements to house the corporate headquarters of eight major companies, setting the stage for it becoming a local high-end business center in Changzhou.

Samsung Electro-Mechanics Vietnam (SEMV) Co Ltd on Wednesday received a licence from authorities in the northern province of Thai Nguyen to invest US$1.2 billion in electronics production.

The Samsung Group affiliate would build a plant in the Yen Binh I Industrial Park to make integrated circuits and components for mobile devices, according to SEMV general director Seung Moryu.

The facility, expected to be finished within four years, will cover 26.5 hectares in the Samsung Thai Nguyen high-tech complex, which the group began to develop in late March.

Samsung is already building a $2 billion mobile phone and component factory, which will roll out 100 million products every year when operational. With the additional project, Samsung has raised its total investment capital in Viet Nam to $5.7 billion.

Thai Nguyen People's Committee chairman Duong Ngoc Long told an investment seminar last week that the province could possibly attract $2 billion more into the industrial zone between now and the end of the year.

PRYSMIAN GROUP OPENS NEW PRODUCTION FACILITY IN RYBINSK, RUSSIA
INVESTMENT OF US$ 55 M TO PRODUCE CABLES FOR POWER TRANSMISSION AND DISTRIBUTION
PRYSMIAN FORECAST AROUND €200 M SALES IN RUSSIA IN 2016

Milan, 3 October 2013 – Prysmian Group, world leader in the energy and telecom cables and systems industry, has opened today, in the presence of Prysmian Group’s CEO Valerio Battista, the Governor of the Yaroslavl Region Yastrebov Sergey Nikolaevich and the Italian Ambassador in Russia Cesare Maria Ragaglini, its new medium and high voltage cable production facility in Rybinsk, in the Russian Yaroslavl region, as the latest step in its expansion plans in Russia.

After the acquisition in 2009 of Rybinskelectrocabel, one of Russia’s most dynamic cable manufacturers, with the aim of building up local production capacity in high-tech business areas such as High Voltage and Industrial cables, the Group’s expansion in Russia continued following the merger between Prysmian and Draka, with the integration in 2011 of the St. Petersburg’s Neva Cable factory, which makes telecom copper and optical cables.

“The US$ 55 M total investment in the Russian market will allow us to start producing Medium Voltage and High Voltage cables locally, using manufacturing processes that meet the best quality standards of the Group and the best-in-class technology of the cable industry,” explains Cesare Biggiogera, CEO Prysmian Group Russia. “This is a mandatory step if we want to be a partner to Russia’s power transmission and distribution companies, and it will help us to reach the forecast sales target of around €200 million in 2016.”

The Rybinsk plant, which also produces cables for the oil and gas industry, fire performance cables (Low Smoke Zero Halogen) and auto wires, will soon supply the full range of applications in the energy cable business, including medium voltage cables up to 35 kV and high voltage cables up to 330 kV with maximum cross-section 2500 mm2 and cross-linked polyethylene insulation.

The production area stretches across 120,000 m2, of which 30,000 m2 under cover. The new facility will add 10,000 tonnes of production capacity, bringing the total potential production of Rybinskelectrocabel to 25,000 tonnes per year. The plant will employ more than 300 people, adding 100 to the existing 220 currently working on the site. This will allow the Yaroslavl region to become Russia’s leading area for cable and wire production, with the total production capacity of Prysmian and the region’s other cable manufacturers meeting 20% of Russia’s energy cable demand.

The opening of this new facility represents a fundamental step in the Group’s plans to expand in the Russian market. The start of local production undoubtedly represents a competitive advantage for Prysmian and will help strengthen the Group’s presence in this high-potential market. In recent years the Group has been involved in developing a High Voltage network in St. Petersburg, and in upgrading the Moscow transmission grid. In the telecoms sector, Prysmian has deployed its FTTH systems in several of Russia’s major cities, and the Neva Cable factory is currently being renovated, switching its production from standard copper telecom cables to optical fibre and OPGW cables, to better match the needs of the Russian telecom market.