How To Spot the Next Growth Markets

Oxford Economics forecast models show that global metros with high concentrations of advanced manufacturing tend to be the leaders in metro growth when ranked by GDP output. 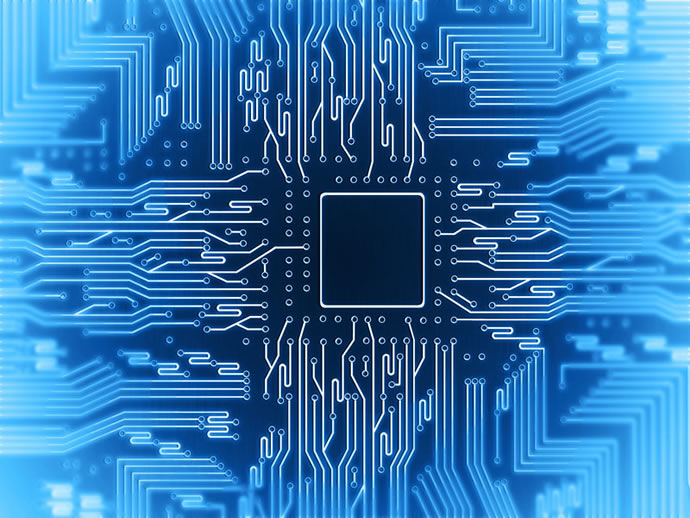 mall observations sometimes tell large stories. Oxford Economics forecasts economic growth for over 3,000 cities around the world, including the three US metros listed in the table below. These cities were selected because they are the top three US cities in terms of forecasted GDP growth (San Jose, Portland, and Phoenix).  There are two quick observations about this table. First, when we think of economic growth in the United States, we generally do not think of cities in California and Oregon as ranking first and second, respectively. Second, there is a wide divergence in job and output growth in these cities.

The concentration of advanced manufacturing in these communities, and the globalized supply networks associated with some of the key industries within that sector, explain both the strong forecasted growth for these communities and are a key reason why job growth is not keeping pace (although note that job growth lags GDP output, but does still exceed US averages).

Our global forecast models show that those metros with high concentrations of advanced manufacturing tend to be the leaders in metro growth (when ranked by GDP output). In the United States, increasing output in advanced manufacturing is associated with declining employment. In large part, this reflects sharply rising productivity in the United States. Labor productivity in this sector (Electronics and Computers) has increased by 80 percent since 2009, compared to 25 percent for manufacturing as a whole. This soaring productivity is fantastic for output growth, but it does yet seem to be diminishing reliance on global supply networks. That in part explains why there is a wide divergence in job growth and output growth in those communities hosting large concentrations of companies from the computer and electronics industries.

So if not in the United States, then where is production growth forecast to be the greatest? The following table shows those countries where production output is expected to grow the fastest over the next five years: 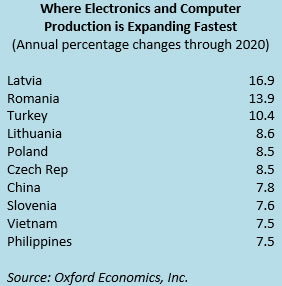 China is a particularly interesting story. Its production output in the electronics and computer sector is $203 billion, second highest in the world and only slightly behind the United States’ output of $251 billion. Moreover, even though growth in China’s manufacturing output is expected to decline during the coming years, that country’s Electronics and Computer Production is expected to maintain a relatively healthy average growth rate of 7.8 percent per year (over the next five years). China’s key role in the global electronics supply chain is shielding it from the impact of its slowing economy. In fact, Chinese production growth is increasingly spilling over to other Far Eastern economies, especially Vietnam and the Philippines.

Looking to the future, the electronics sector is driven by innovation. As new industries emerge (perhaps with the rise of the-Internet-of-things or 3D printing) it will be interesting to see how global supply networks adapt. One possibility is that the increasing production growth that is just starting to be evident in the East European countries will begin to really take hold if those countries are able to attract investment that is linked to these emerging technologies (and assuming the European economy strengthens). The region already has the strong universities, skilled workforce (especially computer and electronic engineers and scientists) to succeed. Greater integration of these East European countries into the global supply chain of the electronics and computer sector would be a logical next step in the process.

The reason that San Jose, California leads all forecasted United State metros in expected economic growth is not because all of the electronics production is located in that community. The bigger key to that community’s success is its ability to attract and leverage talent from wherever in the world it is located. As our brief survey shows, through this connectivity, expected growth in the electronics and computer sector will continue to impact different communities in different ways; from GDP output growth in Silicon Valley to manufacturing output growth in China, Vietnam and the Philippines. 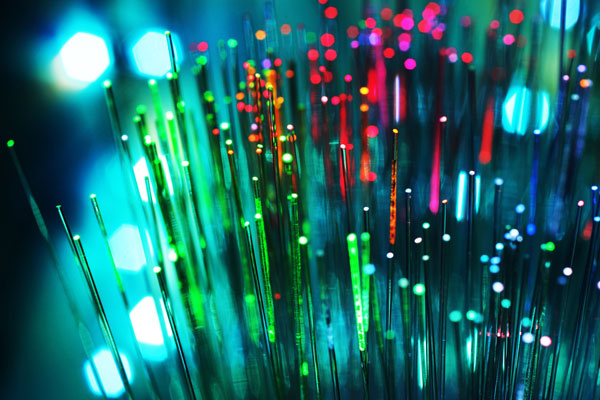 AFFORDABLE ENERGY: Where Expanding Companies Can Find Affordable Power (May 26, 2016)