Equinix, Inc., the global interconnection and data center company, announced March 17th the grand opening of its third International Business Exchange™ (IBX®) data center, known as SG3, in Singapore. The company's flagship data center is the largest in Asia-Pacific and demonstrates Equinix's ongoing commitment to the growing market demand for premium data center services from financial and cloud companies in the region. 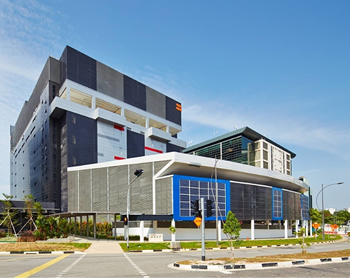 Equinix additionally announced that Orange Carriers Singapore, a 100 percent subsidiary of Orange Group, global communications solutions provider, and Datapipe, a global leader in managed hybrid IT solutions for the enterprise, have chosen to deploy in SG3 as part of their global expansion.

Earlier in March, Equinix announced that it will open five new data centers on four continents in the coming weeks to create more capacity for global companies to connect to their partners, customers and employees. By providing this increased capacity, Equinix expands its role in advancing the digital economy's interconnected era, in which businesses are demanding increasing levels of interconnection to accelerate business performance.

"Over the years, we have seen our customers' needs evolve to include greater demand for reliable, fast and scalable multi-cloud interconnection services in an environment that meets stringent security standards,” said Clement Goh, managing director, Equinix South Asia. “SG3 was built to meet that demand and ensure that companies like Orange Carriers Singapore and Datapipe are ready to support their customers' needs in return. At the same time, we hope to reinforce Singapore's position as a global data management hub by providing organizations with the ability to connect to an established business ecosystem of existing and potential customers and partners via SG3."

Atento Expands with a New Facility in Campo Grande, Brazil

Atento S.A., the largest provider of customer relationship management and business process outsourcing (CRM BPO) services in Latin America and Spain, announced on March 17th the opening of a new customer relationship center in Campo Grande, in the northwest district of Rio de Janeiro. This is the eighth center that Atento has opened in the metropolitan area and surroundings of the carioca city.

Alejandro Reynal, CEO of Atento stated, "We are very pleased to open a new facility to support the growth of our business in Brazil. The new Campo Grande center brings to 32 the total number of Atento centers throughout the Brazilian geography, strengthening our company's position as a leader in customer relationship services and solutions in the country."

The center's opening has the support of the local authorities in Rio de Janeiro and will generate 3,000 new jobs in the area; 800 professionals have been hired already. Atento's state of the art facilities in Campo Grande encompasses 7,000 square meters of built area in two floors, two training rooms, four meeting rooms, two breakout and food areas and an outdoor space. The center is also fully accessible for people with disabilities. The Campo Grande unit will be providing customer relationship, sales and technical support services and solutions to leading companies in the telecommunications sector in Brazil.

ROHM Establishes a New Facility for Discrete Semiconductors in Malaysia

ROHM Co., Ltd. and ROHM Wako Co., Ltd. have announced plans to build a new facility at its manufacturing subsidiary in Malaysia, ROHM-WAKO ELECTRONICS SDN.BHD (RWEM), to meet the need for increased production capability for discrete semiconductors, such as diodes. The project is currently in the design phase, with construction scheduled to begin in July 2015 and completed by August 2016.

The ROHM Group is expanding production capability by updating its cutting-edge, high efficiency manufacturing equipment. Following on the heels of last year’s plan of establishing a new facility in Thailand to meet future growth, ROHM is investing 8.9 billion yen (US$75 million) to build a new 38,250m2 manufacturing facility at RWEM to increase total floor space. This effort is expected to double the production capacity for diodes and help ROHM achieve a 30 percent share in the small-signal discrete semiconductor market. 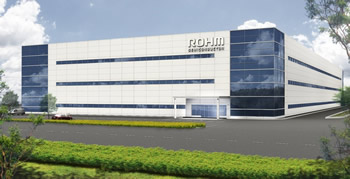 In addition, the new building will take advantage of the ROHM Group’s comprehensive Business Continuity Management (BCM) system by implementing such measures as introducing LED lighting and high efficiency AC equipment and constructing a protective wall to guard against flooding.

YB Dato’ Sri Mustapa Mohamed, Minister of International Trade and Industry said, “We are very excited that Rohm-Wako Electronics, the largest foreign company in Kelantan, is expanding its operations in Kota Bharu. This is a concrete result of the discussion made with the company during our Trade and Investment Mission to Japan last year. This also reflects the result of the continuous efforts by the Special Investment Committee consisting of MITI, MIDA, ECER and other State Government agencies that has been established to further promote investments into Kelantan. Rohm Wako has been in Malaysia since 1989, and the company already provides job opportunities to 1,700 local talents in the area. The expansion project will bring more positive economic benefits to the country, especially Kelantan in the form of jobs and business for local suppliers.”

Halla Visteon Climate Control Corp., a full-line supplier of automotive thermal management solutions, has announced the start of production at its new facility in Sanand, in the state of Gujarat, India. The Gujarat facility will support the company's growing business with global vehicle manufacturers and cater to the requirements of OEMs in the state of Gujarat and western India. The facility has approximately 8,890 square meters (95,691 square feet) of manufacturing space and the capacity to produce 2 million units consisting of heat exchangers; heating, ventilation and air conditioning (HVAC) modules; and air conditioning lines. By incorporating its standardized global manufacturing and business processes, HVCC has the ability to double its capacity at this facility based on business needs.

"India is one of the fastest growing economies in the world and is poised to emerge as one of the top passenger vehicle markets in the near future, and we want to be prepared for the tremendous growth opportunity this market offers," said YH Park, president and CEO, HVCC. "This new plant in Gujarat expands our manufacturing footprint to encompass all of the major automotive hubs in India and allows HVCC to bring world-class thermal management technology to vehicle manufacturers in India." Park added, "With the Indian economy growing at a fast rate and car penetration remaining comparatively low, passenger vehicle sales are expected to gain momentum, and HVCC is well-positioned to provide the Indian market with innovative thermal solutions to address consumer needs."

HVCC has a regional office in Chennai and operates four plants in India – Chennai, Pune, Bhiwadi (near Delhi) and Gujarat – offering automakers a full range of thermal management products including compressors, condensers, HVAC, radiators, air conditioning lines, exhaust gas recirculation (EGR) coolers and charge air coolers. HVCC is the second largest provider of automotive thermal management systems in India and with the startup of the Sanand plant, the company has extended its reach to all auto hubs of India.

Aquavit To Invest in R&D, Manufacturing in S. Korea

Aquavit Life Sciences, Inc. announced plans on February 23rd to invest in a new R&D and manufacturing facility in Daegu, South Korea. Aquavit will build a facility that is compliant with US FDA regulations for current good manufacturing practices (cGMP). Phase 1 of the project will be a 10,000-sq.-ft. (930-sq.-m.) space equipped with an ISO 5 class cleanroom under ISO 14644-1 classification. Aquavit signed a five-year contract with Kyungbuk National University (KNU) Technopark, which is a science and technology incubation center.

"We are excited to partner with Aquavit and bring their cutting-edge technology to our research center," said Dr. Kwang-Tae Kim, Professor and Director of the KNU Technopark. “Their investment will benefit our local economy, and we are confident that our professionals with advanced degrees in the sciences will contribute to their success.”
The city of Daegu has been expanding its commitment to the biotech and pharmaceutical industries and has invested over $600 million to date in state-of-the-art infrastructure and facilities that support the growing opportunities in these industries. Despite the economic growth in South Korea lead by strategic investments from companies like Samsung and LG, the private pharmaceutical and biotechnology sector has grown more slowly, since the process is lengthy, time consuming and the risks are higher. The city of Daegu is working to change the dynamic.

"The city demonstrated its passion and commitment for innovation in medical technology and the biotech industry; and combined with KNU's strength in IT, engineering, and pharmaceutical sciences, the decision was clear,” said Sobin Chang, Aquavit CEO. “The new location will position the company to enhance its pipeline of personalized medicine products and technology. Our new facility will increase R&D collaboration and efficiency, connect us to a pool of talent the city has to offer, and strengthen our ability to drive product development, manufacturing and innovation programs forward." In addition to developing its own pipeline, Aquavit will partner with domestic pharmaceutical firms in research, global clinical tests, and other ventures. Aquavit also intends to expand its overseas sales network in the coming years.

Comblift To Invest $50 Million in a New Ireland Facility

Combilift Ltd. is to invest $50 million over the next two years in a new manufacturing facility in Ireland, which will also create 200 additional jobs over the next five years. This announcement was made by Irish Prime Minster Enda Kenny along with the Irish Minister for Jobs, Enterprise and Innovation Richard Bruton on a visit to Combilift’s current headquarters in Monaghan, Ireland, on February 6. This expansion will enable Combilift to proceed with its plan to double its current $190 million turnover over the next five years. The majority of the 200 new jobs to be created will be for skilled technicians and design engineers, and a further 200 jobs will be created during the two-year construction period of the new facility.

Combilift has recently purchased 100 acres (40.5 ha.) of industrial zoned land where the new purpose-built, 430,000-sq.-ft. (40,000-sq.-m.) greenfield manufacturing site will be built. This will include a dedicated Research and Development building, adjoining administrational offices and will be more than double the size of the company’s present manufacturing facilities

Combilift is best known for its wide range of multi-directional forklifts, Aisle-Master articulated forklifts and other innovative material handling solutions such as the Combilift Straddle Carrier designed to handle large containers and over-sized loads. The company was set up by CEO Martin McVicar and Technical Director Robert Moffett in 1998 and thanks to the continued 7% investment of turnover in R&D, Combilift has produced in excess of 24,500 units since 1998. It currently employs over 300 people at its two facilities and products are exported to over 75 countries.

Commenting on this announcement, Martin McVicar said: “With this greenfield investment and sufficient land available on the new site for future expansion, Combilift is committed to continuing its organic growth in Monaghan, Ireland for many years to come.”