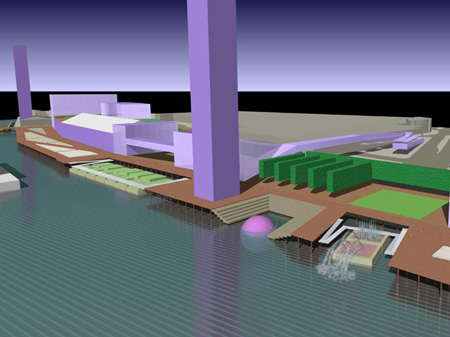 The Center for Excellence in Renewable Energy Systems at RiverSphere aims to help develop markets for river turbines, create “green-collar” jobs, closely monitor the sustainable use of the river basin, and convene renewable energy meetings.
image courtesy of Eskew+Dumez+Ripple

Led by a project on the New Orleans
riverfront, hydrokinetic energy churns
its way down the Mississippi.

t's been 12 years since Dr. John A. McLachlan, director of the Center for Bioenvironmental Research (CBR) at Tulane and Xavier Universities, and writer John M. Barry, author of "Rising Tide," a bestseller about the 1927 Mississippi River flood, dreamed up the idea of RiverSphere, a place to learn about rivers that would be located along a 1/3-mile stretch of the Mississippi River in downtown New Orleans. Now circumstances may be conspiring to bring the project to its fullest expression, driven in part by energy from the river's current.

In April, Tulane officials welcomed word of $3 million in the form of a federal economic stimulus grant to establish a center at RiverSphere for commercial development of hydrokinetic turbines. The center will be developed on 22,000 sq. ft. (2,044 sq. m.) of property belonging to the Port of New Orleans, though Tulane has an option to expand to as much as four times that space. A testing barge would also be part of the project.

Among the companies and property owners interested in using the turbines are Free Flow Power, MARMC Enterprises LLC, Gulfstream Technologies Inc., Leviathan LLC and Federal City, the large complex housing both military and civilian agencies that used to be part of the Naval Support Activity property.

At the Southern Legislative Conference in Charleston, S.C., in early August, Louisiana State Rep. Jeff Arnold of Algiers discussed the successful legislation he sponsored earlier this year to allow installation of hydrokinetic equipment in the river. The measure permits those with licenses from the Federal Energy Regulatory commission (FERC, which is enthusiastic about hydrokinetic power) to move forward with installation. The state Dept. of Natural Resources will not charge for the installations.

"We're known for our mineral resources, our oil and natural gas, but we never had anything in place to allow installation of hydro in the river," said Arnold, who's equally excited about the public and business connections the project could engender. "There is a lot of port activity, but few areas for the public to use the river. This particular venture is going to allow not only the science to be held on the river, they are actually generating power for Mardi Gras World [a tourist destination where the famous parade's floats, props and sculptures are worked on year round], and the headquarters of the Port of New Orleans, located directly behind our convention center."

Total cost estimates for construction of the entire RiverSphere complex range from $125 million to $131 million (in 2005 dollars).

Various forms of hydropower currently supply approximately 7 percent of U.S. power. In the 1940s, they supplied 40 percent. FERC has shown enthusiasm for hydrokinetic power. And in March, just before the federal grant to RiverSphere, DOE Secretary Stephen Chu signed a memorandum of understanding with the U.S. Dept. of Transportation and the Dept. of Agriculture to increase hydro generation at federal facilities.

Arnold found himself involved in the topic because of Federal City-New Orleans.

"In 2005 we led a battle to not close our base, and we laid out a plan for BRAC to keep our base open," he said. "The Marine Corps liked our presentation and decide they wanted to stay, and subsequently convinced the BRAC commission to keep a portion of the base open. Part of our presentation was to make it a green facility. We were approached by several companies [who said] that the water was a prime opportunity, for placing turbines in the river."

The state has invested $150 million in the construction of a new national headquarters for the Marine Forces Reserve, a 480,000-sq.-ft. (44,592-sq.-m.) building scheduled to be occupied in June 2011. The U.S. Coast Guard also has recently located a command station at the 200-acre (81-hectare) Federal City site.

Massachusetts-based Free Flow Power, developer of the SmarTurbine for projects such as this one, has preliminary federal permits for placing its turbines at 71 specific locations along the Mississippi, with 25 of them located on the Lower Mississippi. Each site would feature between 150 and 500 turbines in the river, generating between 3.3 GW and 11 GW of power. Various site studies of vegetation and wildlife, archaeology, electromagnetic fields, commercial fishing and navigation, among other issues, are ongoing.

Earlier this month, Free Flow Power announced that J. Mark Robinson, who just retired in June from a post as director of the Office of Energy Projects at FERC, has been appointed to the company's Advisory Board. At FERC he was responsible for regulatory approval of new energy infrastructure development projects, including hydropower projects.

By 2014, once FERC licenses are obtained and financing for a private-sector utility-scale project is in place, the company aims to be installing the full arrays of turbines, envisioning 1,000 jobs in manufacturing the systems, and 3,200 jobs in construction, operations and maintenance of them. In addition, Free Flow Power is also working with industries on the concept of using wastewater returns to rivers as energy sources — a topic that may be of interest to the same industrial end users who are interested in using the hydrokinetic power.

Arnold, who serves as chairman of the commerce committee, sees it as a triple win for his state: generating power from a resource without using up that resource; job creation; and the potential to provide other industries with reliable hydropower. 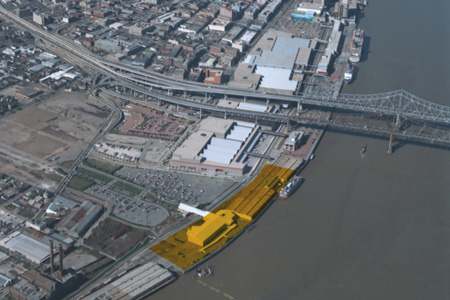 RiverSphere is located on the last prime piece of riverfront real estate in downtown New Orleans.
image courtesy of Eskew+Dumez+Ripple