Nope. It's in the suddenly greening People's Republic of China, at Himin Solar's headquarters in the Dezhou Economic Development Zone in Shandong Province. Himin and Dezhou in September will host the 4th Annual International Solar Cities Conference (ISCC), an event where the region will showcase its transformation from a farming area using the sun to grow crops to a solar industry area using the sun to grow business.

Some 10,000 volunteers are registered to help with the event. Among its featured venues will be a Light Cube exhibition hall, modeled after the Water Cube featured at the 2008 Olympic Games in Beijing — an event for which Himin completed several projects demonstrating its solar products.

Himin is led by Huang Ming, its board chairman, a former oil equipment engineer and one-time deputy in the National People's Congress. Under his watch, Himin Solar, established 15 years ago, has become one of the world's largest producers of solar water heaters. It also makes solar collectors, solar panels, solar lights and photovoltaic (PV) lighting products. Its annual production capacity is 3 million solar water heaters, 20 million vacuum tubes and 50 MW worth of PV products, and its markets are worldwide.

In addition to recent press exposure, Himin and the 815-acre (330-hectare) Solar Valley it serves a catalyst have been visited by such organizations as the government of Imperial County, Calif. (in March 2009). "Among American guests, an investor said he would build his shopping mall of 81 acres with renewable energy systems," says a Himin press release about the visit, which also included Himin's presentation on its plans to enter the U.S. market:

"In Imperial Valley, solar will be up to 20 percent by 2010, and 30 percent by 2015," noted Himin. "American local governments have optimistic views on solar development, which is also a good opportunity for Himin to explore American market."

The company annually sells as many solar water heaters as all produced in the EU, and twice as many as all of North America. Goldman Sachs and CDH Investment invested $100 million in the company in 2008, and it is preparing to go public.

At its complex, Himin's solar testing center has 18 labs performing 360 tests, "24 times the national test requirements, and 7.5 times the international requirements." The company's evacuated tube factory, at 462,000 sq. ft. (42,800 sq. m.) is among the largest such factories in the world. Among the company's timeline highlights:

In Dezhou — a new-generation company town at the center of a metro area of 5 million people — solar powered lighting lights the streets, and solar collectors collect on rooftops. In preparation for hosting the ISCC, city officials have pushed such programs as a million roof project and a rural bathroom program. It doesn't hurt Himin's business plan that the city requires all new buildings be outfitted with solar water heaters.

According to a May 2010 profile in The Washington Post, Dezhou invested $10 million in the solar lighting of its streets, part of $740 million invested in the Solar Valley concept overall. The city's economy grew by 12 percent in 2009, as it aims to do its part to help China obtain 15 percent of its power from renewable sources by 2020.

The Post pointed out that this ambition may be outsized, given China's continuing growth in energy consumption from coal … including in Dezhou itself. But that doesn't mean Solar Valley can't become, as a banner proclaimed, "The Biggest Solar Energy Production Base in the Whole World."

But the assets of the region are strong already. The provincial Dezhou Economic Development Zone is home to hundreds of firms, including sectors such as biotech, HVAC, electronics, machinery manufacturing, clothing and textile, food processing and logistics. In addition to a number of companies from multiple Chinese provinces, the denizens of the Dezhou zone also include Japan's Meiji Machine Co., Germany's GP AG Group and the U.S.-based Asymchem Group.

"Shandong Vicot Air Conditioning Co., Ltd. and Tianyu Group have established cooperation with Italy-based Vicot, Korea-based LG, and Dubai-based companies," says the zone's Web site. "The central air conditioners produced by Dezhou Economic Development Zone accounted for more than 20 percent of the market shares throughout the country." No wonder, then, that the zone is also home to three leaders in the production of down jackets: Yalu, Hansi and Bosideng, which controls half the market.

The zone boasts a full range of industrial and human resources infrastructure, including an English-Chinese bilingual school and some 56 medical institutions, including eight hospitals. The zone is located in the east of downtown Dezhou, where the Beijing-Shanghai and Dezhou-Shijiazhuang railway crisscross — Dezhou is a stop on the Beijing-Shanghai high-speed rail route. It's also near Jinan Airport, which is 145 miles (234 km.) from Tianjin Harbor.

The theme of the ISCC event in September in Dezhou is "Solar Energy Changes Life." It's certainly changed the lives of thousands in the Dezhou region. The world waits to see if it and other renewable-energy sectors will change the energy-hungry lifeblood of the Chinese economy. 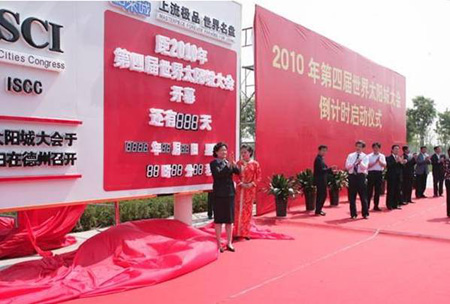