Get Behind the Sun

Large solar power projects in the desert and
the snowbelt look to financial backing befitting their scale. 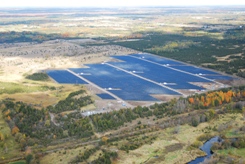 First Light 1 (pictured) and II, in Lennox and Addington County mid-way between Ottawa and Toronto, are the first utility-scale solar farms in Canada. They were developed by Skypower and SunEdison.
S

Turns out both territories are primed to transform some sunshine thanks to achieving certain financial milestones.

Just before Thanksgiving, Solar Trust of America, LLC announced that its development subsidiary, Solar Millennium, LLC, has received a draft term sheet for a loan guarantee from the U.S. Department of Energy (DOE) for the $6-billion Blythe Solar Power Project (Blythe) in California under its 1705 program for Innovative Technologies. "The draft term sheet is an important financial milestone in the realization of what will be the world's largest solar facility and a significant catalyst to the development of a manufacturing supply chain for solar thermal technology in the U.S.," said a Solar Trust release. Solar Trust is a venture of Germany's Solar Millenium AG and Ferrostaal AG.

Located in Riverside County, where the October unemployment rate was at 14.7 percent, Blythe is the first parabolic trough solar facility approved on U.S. public land — 7,025 acres (2,843 hectares) of it.

"Blythe is fully permitted for up to four 250 megawatt (MW) plants that together will deliver 1,000 MW of renewable generating capacity to the grid, or enough electricity to annually power more than 300,000 single-family homes," said the company. "The draft term sheet corresponds with the development of the first two of four power plants."

"This project construction is expected to create over 1,000 direct jobs in Southern California, 7,500 indirect jobs in related industries throughout the United States, and more than 200 long-term operational jobs at the facility itself," said Uwe T. Schmidt, chairman and CEO of Solar Trust of America and executive chairman of project development subsidiary Solar Millennium, LLC.

"We are very pleased with the proactive response of the DOE loan guarantee team regarding the Blythe project and the improvements the DOE has made to support this critical program for innovative renewable projects in the U.S.," said John Clapp, Solar Trust of America's CFO. "We also anticipate that other government agencies involved in the Loan Guarantee program will move quickly to support fully permitted projects, such as Blythe. The DOE's Loan Guarantee program, along with the Treasury Department's Cash Grant program, are both critical components of renewable energy financing for utility-scale solar projects in today's market environment."

Solar Trust has other such projects in development in California and Nevada. The Blythe project received a license from the California Energy Commission on September 15 and a Record of Decision issued by the Department of Interior's Bureau of Land Management on October 25. According to statistics from the DOE, upon completion, the Blythe facility will increase the solar electricity production capacity of the U.S. by more than double. It is one of nine solar thermal power plants in the development pipeline in California.

Your Money's Good Here, Too

According to a report in The Wall Street Journal, Solar Trust is working with Citigroup and Deutsche Bank to obtain project equity and tax equity investment. As it happens, Deutsche Bank is a key player in smaller scale but no less significant solar farm projects in Ontario. And contrary to the imminent December 31 expiration date of U.S. federal incentives for such projects, Ontario's renewable mandate is just getting started, in the form of its Green Energy Act and feed-in tariff arrangement.

On December 2, the bank and SkyPower Limited announced they had signed a financing deal for two SkyPower solar parks: a 10-MW solar park in Stone Mills, Ontario — home of SkyPower's first solar project and also Canada's first fully operational solar park, First Light I — and an 8.5-MW solar park in Thunder Bay. A similar pair of projects, dubbed SunE Sky Norfolk I and II in Norfolk County, Ont., near Simcoe, were launched in spring 2010. The partners on those farms, SunEdison and SkyPower, received CanSIA's award for the "Solar PV Project of the Year" in 2009 for First Light I, the first fully-operational, utility-scale solar park in Canada. The park sits on 300 acres (121 hectares) of land in Lennox and Addington County, almost mid-way between Ottawa and Toronto.

"We are so proud to close financing on our fifth and sixth solar projects and to solidify the arrival of this new era of renewable energy in Ontario," said Kerry Adler, president and CEO of SkyPower Limited. "Deutsche Bank and SkyPower are great examples of Ontario's energy policy and entrepreneurial innovation working together and creating new green energy jobs."

The debt package amounts to approximately $70 million CAD. For Deutsche Bank, this debt closing marks the third successful close of financing in Ontario in the past nine months.

"These solar parks represent an important step in Ontario's effort to become a leader in the global clean energy market," said Ontario's Minister of Energy and Infrastructure Brad Duguid at the Norfolk site earlier this year. "Not only will increasing the province's renewable energy capacity offer environmental and economic benefits to the province, but it will help us accomplish our goal of phasing out dirty coal-fired power by 2014."

More recently Duguid paid a visit to the manufacturing supply chain supporting such projects, as ATS Automation Tooling Systems of Cambridge, Ont., officially opened a solar panel manufacturing wing that will produce 400,000 panels a year for residential, commercial and industrial customers. The new line has meant 150 new employees at the 900-person firm.

Jostling for the Lead

Like swaths of redacted text in government documents, the solar farms continue to blot out big chunks of landscape in the name of saving it. And the daily race to be the largest continues apace.

Also unfolding on the edge of Great Lakes country is the first phase of the Turning Point Solar LLC project on some 500 acres (202 hectares) in Appalachian Ohio. A JV of Agile Energy Inc. and New Harvest Power, the 49.9-MW project claims to be the largest commercial solar development east of the Rockies. It also claims to be creating 300 construction jobs. Spanish firms Prius Energy S.L. and Isofoton have agreed to open new manufacturing facilities in Ohio to help construct the 239,400-panel solar array, and create 300 more jobs in the process.

AEP Ohio has entered into a memorandum of understanding to negotiate a long-term power purchase agreement for solar energy with Turning Point Solar.

If executed as expected, AEP Ohio would purchase through a 20-year agreement all of the output, including renewable energy credits, from the facility, which is located on reclaimed coal mine lands owned by AEP. Where once the land was strip-mined by the world's biggest dragline, called "Big Muskie," it now will be blacked out by parcels of panels.

A wildlife park called The Wilds, which opened in 1994, was created from 10,000 acres (4,050 hectares) of the land stripped by Big Muskie and reclaimed. Turning Point Solar is adjacent to The Wilds, on a parcel owned by the nature conservancy and AEP. Prairie planting tests are currently being conducted as part of plans to transform the land under the solar panels into an organic carbon sink.

Ohio Substitute Senate Bill 221 requires that AEP Ohio supply 0.06 percent of its load in 2012 with generation from solar resources, 0.09 percent in 2013, and 0.12 percent in 2014. The benchmark requirements ramp up annually to a total of 0.5 percent by the end of 2024. AEP Ohio already has met the benchmarks set for 2010 and 2011 through its long-term purchase power agreement for solar energy from the 10.08-MW Wyandot Solar facility in Upper Sandusky, Ohio.

But the size sweepstakes continues. And it comes as no surprise that Texas has an entry. Today, December 15, RRE Austin Solar will break ground in Pflugerville, Texas, on "Pflugerville Solar Farm, a $200-million investment expected to create 350 construction jobs over the next two to three years. How big is this project? Why, "the largest solar farm project in the United States," says the invitation to the groundbreaking. 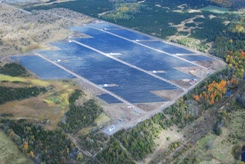 First Light 1 and II (pictured), in Lennox and Addington County mid-way between Ottawa and Toronto, are the first utility-scale solar farms in Canada. They were developed by Skypower and SunEdison. 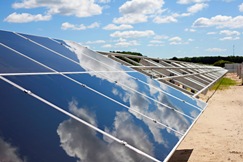 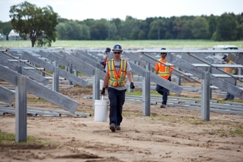