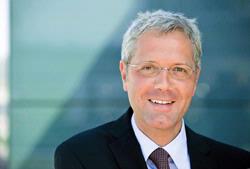 urope's current focus on recovery from recession must not distract us from the urgent question of what kind of economy we want to build.

Unless we ensure that the economic recovery sets our countries on a path to a sustainable low-carbon future, we will face continued uncertainty and significant costs from energy price volatility and a destabilising climate.

At the same time we have a tremendous opportunity: to reinforce our own economic recovery, to improve our energy security and to tackle climate change through the development of decarbonised energy sectors, opening up new sources of employment and exports.

But Europe is not alone. A global race to lock in a sustainable low-carbon economy has begun. Europe's economic competitors are not hanging back.

The key question Europe faces is: Do we have the vision to grasp this opportunity and to lead the world in creating this new low-carbon model for economic growth?

We are convinced that Europe has the capability — but it does not yet have the right incentives for changing investment patterns.

A key barrier is the EU's current emissions target, a 20 percent reduction from 1990 levels by 2020, a target that seems now insufficient to drive the low-carbon transition.

After all, the recession by itself has cut emissions in the EU's traded sector by 11 percent from pre-crisis levels. Partly as a result, the current price of carbon is far too low to stimulate significant investment in green jobs and technologies.

If we stick to a 20 percent cut, Europe is likely to lose the race to compete in the low-carbon world to countries such as China, Japan or the U.S. — all of whom are looking to create a more attractive investment environment by introducing low-carbon policy frameworks and channelling their stimulus packages into low-carbon investment.

This is why we today set out our belief that the EU should adopt an emissions target that represents a real incentive for innovation and action in the international context: a 30 percent reduction by 2020. This would be a genuine attempt to restrict global temperature rise to 2 degrees — the key climate danger threshold — stiffening the resolve of those already proposing ambitious action and encouraging more from those currently waiting in the wings. It would also make good business sense.

By moving to a higher target, the EU would not only have a direct impact on the carbon price through to 2020 but also send a strong signal of our commitment to a low carbon policy framework in the longer term.  We must not forget that it will be overwhelmingly the private sector that will deliver the investment which will build our low-carbon future, and moving to 30 percent will provide greater certainty and predictability for investors.

Europe's companies are already poised to take advantage of the new opportunities. They currently have a global market share of 22 percent of the low-carbon goods and services sector, thanks to Europe's early leadership in tackling climate change. But the rest of the world is catching up. The Copenhagen commitments, though less ambitious than we had hoped, have triggered widespread action, notably in China, India and Japan.

The case for early action becomes even more compelling when you take into account the reduction in cost estimates. Because of reduced emissions in the recession, the annual costs in 2020 of meeting the existing 20 percent target are down a third from €70 billion to €48 billion. A move up to 30 percent is now estimated to cost only an extra €11 billion more than the original cost of achieving a 20 percent reduction, a supplement worth less than 0.1 per cent of the EU economy. In addition, delayed action comes with a high price tag: According to the IEA, every year of delayed investment on low-carbon energy sources costs €300-400 billion at the global level.

Furthermore, these costs were calculated on the conservative assumption that oil will cost $88 a barrel in 2020. Given the current constraints on supply-side investment, rapid growth in consumption in Asia, and the impacts of the Gulf of Mexico oil spill [http://www.siteselection.com/ssinsider/snapshot/Recovering-from-Disaster.htm], oil prices may well rise further; under one IEA scenario, the price could reach a nominal $130 a barrel. Rising oil prices would lower the costs of hitting any targets and, under some scenarios, the direct economic effects of hitting the 30 percent target by 2020 actually turn positive. Businesses and households would save more money, in lower energy consumption, and hence imports, than the extra costs to the economy.

Some energy-intensive sectors will be exposed to greater costs than the average. We already try to safeguard them through free emissions allowances where necessary, and alternative measures might be needed to prevent carbon leakage over time. The real threat they face, though, is not carbon prices, but collapsing demand in the European construction and infrastructure markets. The one sure way to increase demand for the materials that these sectors produce is to put in place the incentives to boost investment in large-scale low-carbon infrastructure — voracious users of steel, cement, aluminium and chemicals. Our industry departments are working with these sectors to ensure that we manage this transition effectively and we maximize the opportunities for EU industry.

We need to give our companies the chance to grow domestically while continuing to compete internationally. Moving to a 30 percent target would result in at least a doubling of low-carbon markets compared to sticking to the current 20 percent. Much of the new growth would be in jobs-rich sectors like energy saving.

Ducking the argument on 30 percent will put us in the global slow lane. Early action will provide our industries with a vital head start. That is why we believe that the move to 30 percent is right for Europe. It is a policy for jobs and growth, energy security, and climate risk. Most of all, it is a policy for Europe's future.