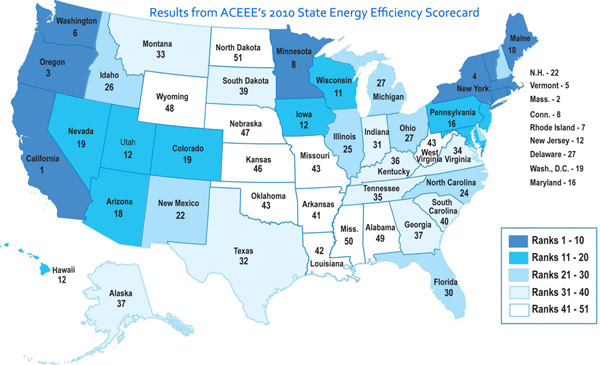 erritories reward all manner of renewable energy use and green behavior. But the ultimate renewable, however unglamorous, may be the innovative technologies and policies that drive better energy efficiency.

One of the criteria used in evaluating states in Site Selection's first annual Sustainability Rankings in July 2010 was their scores on the State Energy Efficiency Scorecard issued for the past three years by the non-profit and independent American Council for an Energy-Efficient Economy (ACEEE). In 2009 California topped the list — part of why it then topped Site Selection's rankings this past July.

In October, ACEEE released its 2010 scorecard, and California topped the rankings again (as it's done every year since the scorecard's inception), followed closely by Massachusetts. The map to the right shows the rankings of all states.

Among the major state advances highlighted in the fourth edition of the ACEEE Scorecard are: a near doubling of state energy efficiency budgets from 2007 spending levels; the adoption or active consideration by over half the states of Energy Efficiency Resource Standards (EERS) that establish long-term, fixed efficiency savings targets; and a one-year doubling of the number of states that have either adopted or have made significant progress toward the adoption of the latest energy-saving building codes for homes and commercial properties.

"Even as Washington dawdles on climate and clean energy, states are moving ahead with considerable vigor on these vital matters, with energy efficiency initiatives leading the way," said ACEEE Executive Director Steven Nadel. "In particular, states are moving forward and advancing energy efficiency policies and programs in an effort to create jobs and stimulate their economies during a period of considerable economic uncertainty. While $11 billion in American Recovery and Reinvestment Act funds was helpful in this process and there were setbacks in a few states, the overall story here is one of states getting done what Congress has so far failed to do."

"New Mexico has taken a number of steps under the leadership of Governor [Bill] Richardson to improve energy efficiency, including making sure new buildings are constructed to higher energy-saving standards and boosting utility energy-saving programs and services," said New Mexico Department of Energy, Minerals, and Natural Resources Cabinet Secretary James Noel. "These steps will save consumers energy and money and create good local jobs that can't be outsourced."

The Scorecard examines six state energy efficiency policy areas and presents these results in six chapters (1) utility and public benefits programs and policies; (2) transportation policies; (3) building energy codes; (4) combined heat and power; (5) state government initiatives; and (6) appliance efficiency standards. States can earn up to 50 possible points in these six policy areas combined, with the maximum possible points in each area weighted by the magnitude of its potential energy savings impact.

Among other findings in the report:

The ACEEE report was issued nearly simultaneously with an announcement from the Clean Energy States Alliance (CESA) announcing the winners of the 2010 State Leadership in Clean Energy Awards. CESA is based in Vermont, a perennial top performer in the ACEEE rankings.

The programs and projects awarded this year are:

"Today, the states are the major driving force in funding renewable energy projects throughout the U.S.," said CESA Executive Director Mark Sinclair, echoing the ACEEE perspective. "States understand that clean energy has a key role in driving their environmental and economic progress."