One More Step Off the Grid 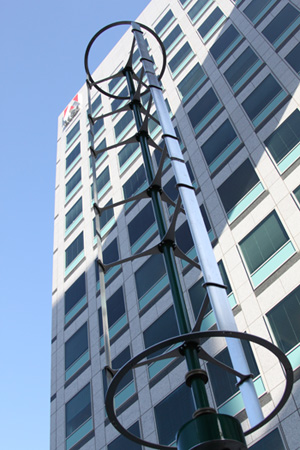 Adobe’s renewable energy portfolio at its San Jose campus includes 20 wind turbines, which supply 1.2 megawatts of power. “We have peregrine falcons here, and there has never been a reported bird strike from these turbines,” says Adobe’s Randy Knox, thanks to the way they’re tuned and the speed at which they turn. “They’re not like those big turbines utilities are using. Some employees say they look like wind art.”

by Adam Bruns
I

n a Site Selection profile of Adobe Systems' sustainability and energy efforts in January 2009, we learned that, in addition to its top-shelf ccomplishments in green building, projects such as server virtualization, solar power and a 2.4-MW natural-gas-fired fuel cell installation were on the horizon.

The horizon has arrived.

Adobe expects to reduce its carbon footprint by approximately 121.5 million pounds over 10 years, which is the equivalent to taking 1,810 compact cars off the road annually.

One advancement is something called the Optimum Loop, formerly known as the Hartman Loop until Optimum Energy picked up the technology. The company's software program monitors the equipment in a building's chilled water loop.

"We installed it in our West Tower during shutdown," says Knox, "and we are seeing as much as a 40-percent reduction in the amount of electricity our chillers are using. We're putting it in our other two towers in San Jose."

In December 2009, the company installed 20 wind turbines in downtown San Jose, which went online in early January at its three-tower campus.

"The latest is the Bloom fuel cells," says Knox, which were installed in August and all fired up in September. A total of 12 Bloom Energy Servers — also known as Bloom boxes — have been installed on the 5th floor of Adobe's West Tower. Each server is the size of an average parking space and contains thousands of Bloom fuel cells — flat, solid ceramic squares made from a sand-like powder — which will convert air and biogas (in this case, methane) into electricity via a clean electrochemical process, producing zero net carbon emissions.

Typically, one server generates enough power to meet the needs of approximately 100 average U.S. homes or one small office building.

"Each box produces 100 kilowatts of electricity, so we're producing 1.2 megawatts," says Knox, or roughly the equivalent amount produced by the 20 wind turbines.

Bloom just unveiled its latest generation of the boxes in early 2010, also unveiling a list of customers that, since 2008, have included Bank of America, The Coca-Cola Company, Cox Enterprises, eBay, FedEx Express, Google, Staples and Walmart.

Adobe has a contract for the methane gas supply. The renewable energy being produced by the cells will account for as much as 30 percent of Adobe's San Jose energy needs, he says.

One of them is in Utah, where the company announced an expansion earlier this fall.

"Customers who purchase Bloom's systems can expect a three-to-five-year payback on their capital investment from the energy cost savings," a Bloom statement pledged in February.

Out of all the alternative solutions deployed thus far, says Knox, "my gut is telling me the fuel cells are the most efficient and effective now. We're effectively paying about 8.5 cents per kilowatt-hour for that electricity. Buying power from the local utility costs 13 cents. Given those numbers, the payback for the current investment is between four and six years."

Bloom's Still On the Rose

Headquartered in nearby Sunnyvale, Bloom was founded in 2001, and traces its roots to the NASA Mars space program. For NASA, Dr. KR Sridhar, principal co-founder and CEO of Bloom, and his team were charged with building technology to help sustain life on Mars using solar energy and water to produce air to breath and fuel for transportation. It didn't take long to see the applicability on the human race's home planet.

Knox says a traditional problem with fuel cells is dissipated heat, which needs to be captured and used either for heating buildings or, ironically, running chillers, both of which are costly steps. So his team at Adobe consulted with Prof. Roger Terrill at San Jose State University, who helped them determine that Bloom boxes were the best technology available.

Asked whether geothermal was the next frontier for Adobe, Knox says the company isn't using it yet, "though we are looking at it in a couple spots." Similarly, the company is still vetting various solar solutions, whether in the form of novel technologies, or municipal agreements whereby the town puts in the land and companies put in the solar units, with all sharing the output.

Knox says the municipality of San Jose, already known for its greening efforts, was just as much of a novice with fuel cell siting as Adobe was. But he praises Mayor Chuck Reed and his team for their openness to all manner of new technologies.

"I would say, 'This is new, but we have to figure out some way to make it work.' I don't want to say there was reluctance, but maybe caution, because they haven't seen it before. They have a very positive approach in attitude. For example, as soon as you stick any piece of equipment on a roof or garage, the city immediately wants it screened. But in this case, [with the units] clad in stainless steel, they're really not an eyesore at all. We said we will sign an agreement that says if you come back and ask us to put up a screen, we will. But let's wait and see the reaction from the community. So we worked through it."

The fuel cells qualify for the 30-percent federal tax credit, as well as the self-generation incentives program sponsored by the California Public Utilities Commission. "Those two incentives certainly helped us offset some of the cost and make the project more viable," says Knox.

In Adobe's book, if it's viable, it's try-able.

"It's in keeping with the company's core values of responsibilty to the local communities we live in and to the global environment as a whole," says Knox. "I think we're on the frontier here, and would encourage others to step up for the new technologies, reduce the amount of energy they're using and take power off the grid."