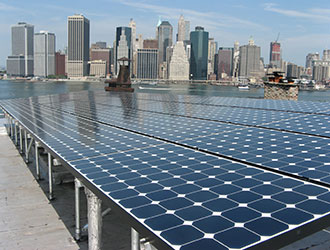 his article is the second in a two-part series detailing two proposed regional innovation clusters whose collaborators remain committed to the goals and objectives outlined in their E-RIC proposals. The $129.7 million federally-funded Energy Regional Innovation Cluster (E-RIC) grant, which was awarded to the Greater Philadelphia Innovation Cluster (GPIC) in August, required applicants to complete a five-part application package. Although DOE awarded E-RIC dollars to only one of 12 applicants, the process yielded results for other participating consortia.

Our first article, included in the September 2010 edition of the Site Selection Energy Report, spotlighted New England's proposed clean energy innovation cluster consortium and the region's intentions to advance aspects of its proposal post-E-RIC. This article examines the federal government's approach to cluster development as well as aspects of the New York E-RIC (NYE-RIC) and its collaborators' efforts to pursue opportunities revealed during the proposal process.

E-RIC signifies a new federal approach to regional development. Experts suggest that the grant is indicative of the Obama administration's focus on marrying cluster development with the clean tech innovation economy (Pool, 2010). In particular, the Brookings Institution released a 2008 white paper entitled "Clusters and Competitiveness: A Federal Role for Stimulating Regional Economies." The authors anticipated the federal approach to regional cluster creation and argue in the paper that historically, federal policy-makers have taken, for the most part, either a macroeconomic (monetary and fiscal policy) or microeconomic (business regulation, aid to individual businesses and workers) approach to economic policy development. "Washington, in this respect, lacks an appreciation of the importance of 'middle' or 'meso-'economic efforts aimed at regions," write the paper's authors.

The traditional approach presents a development dilemma, to which the paper's authors respond by laying out a federal economic development model that promotes regional efforts to create "flexible, 'bottom-up,' and collaboration-oriented" clusters. The belief being that decentralized, collaborative enterprises will drive economic development and job creation across regions. If E-RIC is any indication, an integrated approach could become the preferred structure of future federal government economic stimulus efforts. And with struggling state economies suffering from high unemployment and a job base under pressure from foreign competition, states are turning to this approach to drive small business growth and job creation through collaboration and organizational networks. 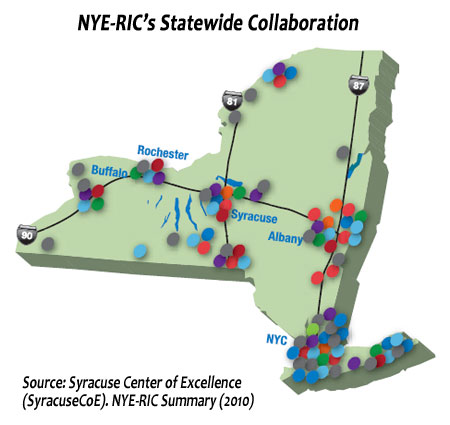 The E-RIC model proposed in New York is representative of this integrative approach to regional clean tech development. Yet the approach is not entirely new to the Empire State. The state has a legacy of early adoption of energy efficiency innovations, established grant and incentive programs, world-renowned research institutions, and international market presence. Furthermore, since 1998 efforts have been under way Upstate to establish a regional cluster around efficiency R&D and manufacturing. Ed Bogucz, executive director of the Syracuse Center of Excellence (SyracuseCoE) and the person who spearheaded creation of NYE-RIC explains that in that time SyracuseCoE has secured nearly $200 million in public and private funds "helping position the center and its partners to operate as a cluster." Downstate, where emphasis in recent years has been on clean-tech training, deployment and commercialization, efforts have also been well under way for some time. In June 2007, New York City became a DOE-designated Solar America City, with the City University of New York (CUNY), through Sustainable CUNY, the lead implementer of the strategic plan for large-scale solar energy market growth. Just three years into the plan, solar production has increased by 300 percent in New York City and as a result, it is considered a regional leader in identifying solar technology and the supporting clean energy and storage innovations needed for continued growth. Sustainable CUNY was also an active partner in the NYE-RIC, taking the lead on the Economic Adjustment Assistance (EAA) and Economic Development Administration (EDA) components of the NYE-RIC proposal.

Tria Case, university director of sustainability for CUNY, says the EAA and EDA aspects of E-RIC were very much in line with the goals of CUNY's new commercialization program, CUNY SustainableWorks, which seeks to create pathways to the marketplace for sustainable and clean technology. In fact, even before the E-RIC RFP was announced, Sustainable CUNY had identified the need for a clean-tech commercialization center, a place to both prototype and showcase new and emerging technologies. "E-RIC helped establish necessary relationships," explains Case. "Through collaboration we developed program language and have been able to identify goals and get through initial barriers to establish a clean energy pipeline that includes R&D and commercialization."

Similarly, in an interview with SU News, Syracuse University Chancellor and President Nancy Cantor asserts, "The process of assembling the NYE-RIC consortium has proven invaluable. We have forged new, cross-sector alliances spanning New York State that hold enormous promise for transforming the building innovation process and for setting a new precedent in Upstate-Downstate New York collaboration."

Ed Bogucz and Tria Case agree with Cantor's statement. Short of winning the federal grant, it is these partnerships and the lines of communication and collaboration that have opened across the state that are perhaps the most valuable result of the E-RIC process. For 12 years Upstate has worked to establish a clean-tech cluster centered on research, development, and manufacturing, whereas Metro NYC is a center of commerce, with access to global markets, investment, insurance, and media. This combination is integral to successful industry growth and it undoubtedly gave NYE-RIC a competitive edge.

The NYE-RIC consortium included more than 100 partners from across the state. With NYSTAR, Syracuse University (SU), CUNY, CenterState Corporation for Economic Opportunity (CenterStateCEO), and the Partnership for New York City leading the effort, this partnership represents myriad research institutions, local and state agencies, well-established networks of training and business centers, among others. Given the enthusiasm of the many partners going into the application process and the new opportunities that have since emerged, it is no surprise that NYE-RIC's partners are not at all deterred.

New York has already begun to move forward in areas not addressed by GPIC. Sustainable CUNY has since secured funding for the design phase of a state-of-the-art commercialization center, with $15 million in state and city funding allocated to date for the facility. In addition to providing a place for CUNY researchers and partners to test and commercialize their research, the Commercialization Center will "raise visibility, engage the public and private sectors, encourage investments and commercialization, and set the climate for adopting new technology." CUNY SustainableWorks is already at work at its Collaboration Center in Manhattan and has established a $1-million technology investment fund for its commercialization program and is actively seeking projects. Regarding other opportunities not included in the GPIC scope, Bogucz says, "There is a remaining need…to address efficiency in buildings that are larger than 50,000 square feet [NYC has 22,000 such buildings] and single family homes." NYE-RIC partners also have the opportunity to "connect energy systems across multiple buildings and districts within urban centers." And New York State is prepared to lead the industry in energy efficient data centers, which he describes as "an area of expertise in New York."

Though members of the NYE-RIC consortium are disappointed by the outcome of the E-RIC application, the strength of relationships and the myriad opportunities that lay ahead will continue to propel the consortium's efforts. "Clusters are about building relationships, and relationships take time, patience, and perseverance," says Bogucz. The major partners remain committed to collaboration because, as he describes, life after E-RIC is "an opportunity too promising to stop."

About the Syracuse Center of Excellence

Mills, K., Reynolds, B. & Reamer, A. (2008). Clusters and Competitiveness: A New Federal Role for Stimulating Regional Economies. Blueprint for American Prosperity. Retrieved on September 13, 2010 from http://www.brookings.edu.

Powers, L. & Mount, A. (2010, August 24). Penn State Receives more than $129 million to lead energy team. Office of the Vice President for Research at Penn State. Retrieved on September 12, 2010 at http://www.research.psu.edu/news/2010/penn-state-to-lead-energy-efficient-building-designs.

Neil Veilleux is a project consultant with Meister Consultants Group (MCG). He works with both public and private sector clients on clean energy strategy, policy, and program development. He earned a B.A. from The University of the South and a M.A. in Urban and Environmental Policy & Planning from Tufts University. He has served as a Rappaport Public Policy Fellow at Harvard's Kennedy School of Government and a Fulbright scholar in Germany. He can be reached at Neil.Veilleux@mc-group.com.

Eugenia Gibbons is program coordinator at the Environmental League of Massachusetts where she manages the organization's climate change project. She earned a B.A. from The University of Connecticut and a M.A. in Urban and Environmental Policy & Planning from Tufts University. Eugenia is also a Grantham Foundation Young Environmentalist Fellow at ELM and a 2011 LeadBoston member through the Boston Center for Community Justice. She can be reached at egibbons@environmentalleague.org.

Wilson Rickerson is CEO of Meister Consultants Group (MCG) and leads the firm's international energy and climate practice. Mr. Rickerson specializes in renewable energy policy design and has worked with a broad range of governments, international organizations, and corporations. He holds a Masters in Energy Policy from the University of Delaware, and a BA in International Relations from the College of William & Mary. He can be reached at Wilson.Rickerson@mc-group.com.