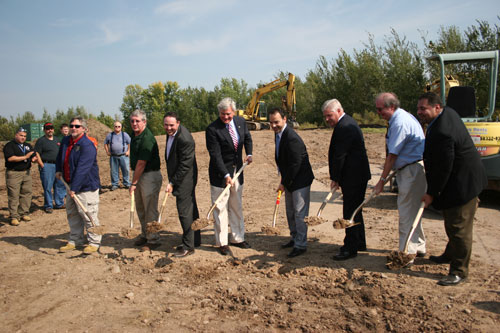 Wind is just one element of an
Upstate New York manufacturer’s
sustainability plan.

n the tranquil Finger Lakes community of Geneva, N.Y., the company known for inventing the machine-less permanent wave 80 years ago broke ground in late September on the largest wind power project in the nation to be constructed on a manufacturing campus.

"This is truly a historic day, not only for Zotos as a company, but for Geneva as a community, and our nation as a leader in the global, green economy," Anthony Perdigao, vice president of plant operations at Zotos, told hundreds of employees and supporters at the groundbreaking.

Two 1,650-kW wind turbines on the Zotos site will generate approximately 7,500 mWh of renewable energy every year. Zotos will provide the city with a donation equivalent to 5 percent of the wind power generated on site.

The company manufactures hair-care and styling-aid products under the Zotos, JOICO, ISO, Senscience, and Bain de Terre brand names, among others, and distributes them to salons and hair-care professionals as well as beauty retailers worldwide. It's one of a handful of major industrial employers in the area, joined by Guardian Glass, which constructed a float glass plant a decade ago and employs 300, and canned fruit and vegetable processor Seneca Foods.

Zotos hopes to power its 670,000-sq.-ft. (62,243-sq.-m.) plant with 100-percent renewable energy by the end of 2011. The project is part of a company-wide emphasis on sustainability from Shiseido, which maintains operations in over 65 countries and has annual sales over $7 billion.

The "ECOmittment" of Zotos includes bottles containing as much as 70-percent post-consumer recycled plastic;100-percent recycled paperboard; and printing on the inside of cartons to eliminate paper inserts. The company also plans to be the first beauty company to voluntarily offset 100 percent of the CO2 emissions produced by its manufacturing and assembly facility.

"Zotos International is not only a great contributor to the Central Finger Lakes economy that has created hundreds of jobs in Geneva, but also a leader in exploring renewable energy options in every aspect of its operations," said New York State Sen. Michael Nozzolio. "Having this home-grown renewable energy source will keep jobs in New York State. It is my hope that other businesses in our region will follow the example that Zotos International has set with their forward thinking on renewable energy initiatives."

Founded in New York City in 1929 as a manufacturer of permanent hair dyes, Zotos is currently owned by Shiseido Americas Corp. and has more than 360 full-time employees and 310 flex-time employees at its plant in Ontario County. The company has invested $30 million at its Geneva plant in the past three and a half years, including a $5-million expansion last year that created 50 new jobs, as the company brought in house its aerosol and plastic bottle blow-molding production facilities.

That project was assisted by $1 million in loans and grants from the city, county and state. And it, too, has aided sustainability initiatives. According to Zotos, in-house aerosol production has not only reduced costs and lead times, but eliminated truckload shipments that have saved more than 100,000 liters (26,417 U.S. gallons) of fuel annually. The company's refurbishment of a rail spur has allowed it to bring in plastic resin by rail, which has saved another 45,000 liters (11,888 gallons), and the company is looking at ways to use rail for more bulk and packaging materials. Finally, the company's expanded in-house production capabilities allowed it to begin making wax/ pomades, packettes and blow molding instead of outsourcing, saving another 28,000 liters (7,397 gallons) of fuel.

In addition, Zotos is pursuing LEED-Platinum designation for its office space, through such measures as high-efficiency windows, geothermic cooling, co-generation radiant floor heating, heat island reduction and low-emitting finishes and furnishings. Zotos was recognized in 2009 as business of the year from the regional Chamber of Commerce, and earlier this year was recognized for its long-term commitment in sustainability within the Greater Rochester area.

Shiseido, based in the Ginza district in Tokyo, has embraced a global "eco-commitment" that in late 2009 included purchasing 10 Nissan LEAF vehicles for its sales team in Yokohama, where electric-vehicle (EV) infrastructure is advancing. Bigger plans are in the works: "There are approximately 1,500 sales vehicles used by Shiseido nationwide in Japan," explains a company statement. "Shiseido plans to consecutively expand the introduction of EVs by considering the timing of leasing contracts at sales offices conducting sales activities and in terms of prefectures where EV infrastructures are expected to develop in the future."

The company first adopted a sustainability policy in 1992. It implemented a zero-emissions policy at its domestic cosmetics factories in 2003, and installed a solar power system at its plant in East Winder, N.J., in 2007.

Earlier this year Shiseido opened a new plant in Vietnam. And in early August, it announced the reconstruction of its head office building in Ginza. The building currently at the site will be dismantled from May 2011 and the new 10-story building will be completed by the end of August 2013. 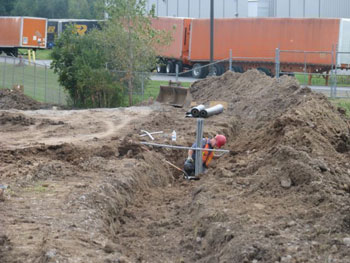 Construction workers dig a trench for power cabling for the Zotos wind project. Neighbor Guardian Glass is in the background.
Photo courtesy of Zotos 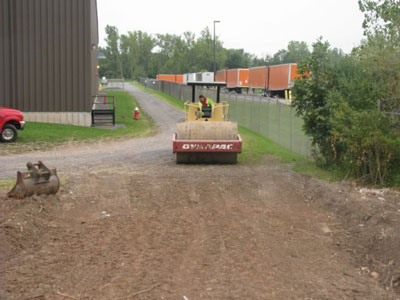 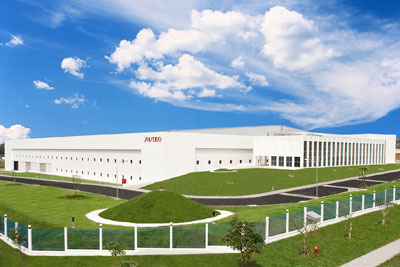