The Hum of the Future

Amsterdam aims to be an electric vehicle capital,
and it’s willing to pay your business to help get there.

The charming streets of Amsterdam may soon be filled with environmentally charming vehicles such as the Renault Kangoo Express ZE, Fluence ZE (shown right) and Nissan LEAF, thanks in part to the city’s subsidy program for businesses to purchase electric vehicles.
Photos courtesy of Amsterdam Tourism and Convention Bureau and Renault
by ADAM BRUNS
T

he city known for its bicycles is gaining just as strong a reputation for the quiet buzz of electric mobility.

Last week the City of Amsterdam signed an agreement with the Renault-Nissan Alliance that aims to register at least 1,000 electric vehicle (EV) sales by the end of 2011, helped initially by the delivery next February by Nissan of 100 of its LEAF vehicles to fleet customers, as well as a sales and service network and a public education program about electric mobility.

"It's not just drivers who will benefit from this agreement. In the end, the whole city will be better off with electric mobility," said Maarten Linnenkamp, Air Quality Program Director for the City of Amsterdam. Netherlands officials are equally ambitious to see EV availability and use spread across the country. The "Amsterdam Electric" scheme for overall eco-friendly mobility is backed by €3 billion (US$4 billion).

The Renault-Nissan news comes hot on the heels of the location by CT&T, the Korean EV manufacturer, of its European headquarters in the city.

"We chose the Netherlands because of its foreign investor friendly climate and Amsterdam because we see it as a city of the future with a far-sighted vision of the future," Tony Michell, managing director of CT&T Europe. "But we plan to assemble vehicles in the Netherlands, in two or more locations, which will be not only sold in the country but also exported until we have built more plants in other locations."

No Charge for Charging

Since March 2009, Amsterdam has offered businesses a subsidy of up to 50 percent of the extra cost for buying an EV over an internal combustion vehicle. Since November the city has installed 100 electric charging posts, and aims to install up to 2,000 additional charging points in its streets, car parks and Park and Ride sites, to be financed by the Air Quality Fund, with a substantial contribution from the government. Starting in 2011, Amsterdam will install a 'Quick Charger' in the city which can recharge a battery to 80 percent of its capacity in about 30 minutes. And businesses wanting to install their own charging posts can apply to the city for a subsidy.

Meantime, the electricity and the parking at those public charging posts is free, at least through March 2012. In addition, EV buyers benefit from

national incentives, including zero registration tax and zero road tax. A Nissan Leaf will still set you back a cool €30,000 (US$40,200), but it's a start, a really quiet and comprehensive start, to a new era of electrified travel.

As for the specifics on the subsidy to businesses for EV purchases, the maximum subsidy available is:

The maximum subsidy granted is €250,000 for the purchase of a maximum of 20 e-cars. The business must be located in the city and conduct business in the city, and the car must be able to drive a minimum of 60 km. purely on electricity.

Having everyone on board is the first step toward making a goal a reality. At the CT&T grand opening, Maria van der Hoeven, Dutch Minister of Economic Affairs, announced that the government will contribute an additional €3.5 million to stimulate the development of electric vehicles in the Netherlands, in addition to the €15 million the Minister had already dedicated to the cause.

By 2015, Amsterdam officials hope to have turned 5 percent of all cars in the city (10,000 vehicles) to electricity. Such a move may further improve the city's already sterling reputation for eco-friendliness, one of the primary reasons Amsterdam ranked 13th in the world in Mercer Consulting's 2010 Quality of Living Survey. 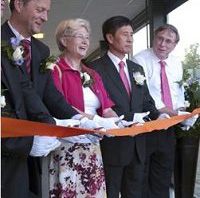 The official opening of the new headquarters of the Korean manufacturer of electric vehicles, Creative Transportation and Technology (CT&T), took place in Amsterdam on 9 September 2010, in the presence of the Dutch Minister of Economic Affairs, Maria van der Hoeven. 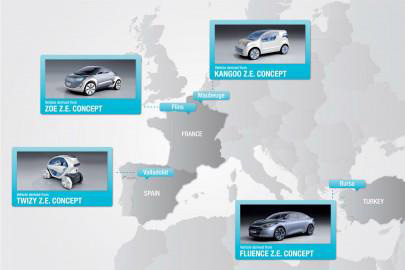 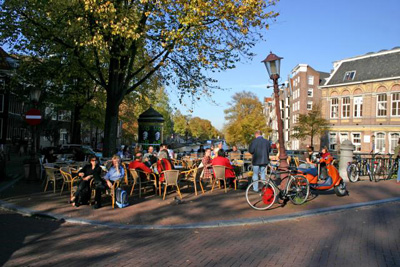