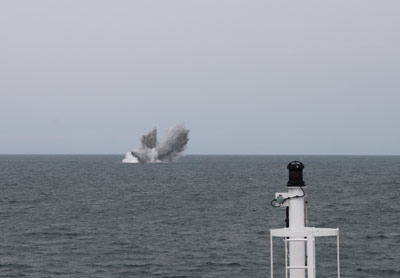 he growth of wind energy is explosive, but explosive ordnance disposal (EOD) specialist Ramora UK just helped it be less so. Earlier this week, at the site of one of the world's largest wind farms, a four-man Ramora UK team used a Remotely Operated Vehicle (ROV) to place a countermining charge next to a 1,500-pound unexploded German mine from World War II. "A controlled explosion [pictured] was then initiated from a safe distance, leaving an underwater crater 65 ft. (20 m.) wide by 13 ft. (4 m.) deep," said a Ramora press release. The mine was found 20 miles (33 km.) off Harwich in Eastern England, on the site of the Greater Gabbard Wind Farm, expected to be complete next year. "The expansion of the offshore renewable energy sector is creating an increased requirement for rapid and safe disposal of the UXO [unexploded ordnance] that is very common in coastal waters," said David Welch, managing director of Ramora UK. 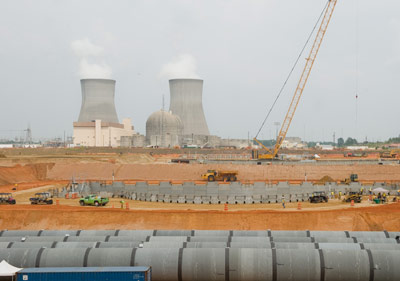 On August 16, the Georgia Public Service Commission, in a 5-0 vote, approved Georgia Power's spending on its nuclear power plant expansion at Plant Vogtle units 3 & 4 for the period including July 1, 2010, through Dec. 31, 2010. Georgia Power, a subsidiary of Southern Co., is preparing the Vogtle site in order to begin full scale construction of the first new nuclear power plants in the U.S. in more than 25 years upon receipt of a Combined Construction and Operating License (COL) from the Nuclear Regulatory Commission (NRC). "The company expects to receive the Vogtle COL around the end of 2011 with Unit 3 becoming operational in 2016 and Unit 4 in 2017," said a news release from Georgia Power. In addition to PSC monitoring and reporting requirements, said the utility, "additional tools are in place to help protect customers, including $1 billion in savings from U.S. Department of Energy loan guarantees, production tax credits and CWIP (Construction Work in Progress)."

On July 19, California Public Utilities President Michael Peevey proposed to modify the state's Self-Generation Incentive Program, or SGIP. The program is designed to stimulate the installation of clean and ultra-efficient energy generation technologies. According to Irvine-based biogas turbine system maker FlexEnergy, Inc., the new SGIP will provide its customers with a significant incentive for the purchase of new equipment, paying 25 percent up front and 15 percent for the following five years based on actual measured performance. 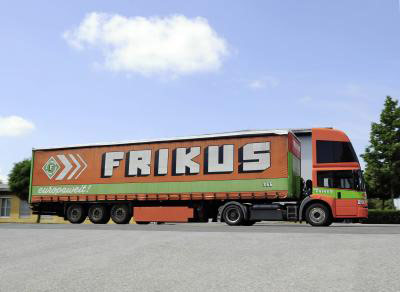 The Mercedes-Benz Econic NGT with gas drive provides support to the environmentally friendly transport and supply logistics operations of the Magna Steyr Group in Austria, thanks to being able to run on natural gas and biogas.
Photo courtesy of Daimler

Speaking of biogas, as a result of research initiated by the Vienna University of Technology and Magna Steyr AG in Graz entitled "Clean Heavy Duty" ("Environmentally Friendly Commercial Vehicle"), in the future the environmentally-friendly transport and supply logistics operations of the Magna Steyr Group are to be carried out for the most part using natural gas and biogas-driven Mercedes-Benz Econic trucks. As part of this move, initially around 20 to 30 diesel trucks are to be replaced by Econic semitrailer tractor vehicles.

"Without deploying the particularly environmentally-friendly specialist vehicle," said a Daimler release, "Magna Steyr would not have been able to operate a third shift — the night shift — which it is aiming to reintroduce following the economic recovery.

"A contributory factor in making the decision in favor of the Mercedes-Benz Econic was primarily the fact that it can run on biogas (methane) produced from bio-waste, without requiring any technical changes to be made to the vehicle. Such waste can include grass cuttings, for example, which remain available in large unused quantities in Austria."

Looking for a good guide to the real dollar figures in play in Northern Alberta's oilsands? This presentation from Edmonton EDC's annual summary of the economy earlier this year is a good starting point. 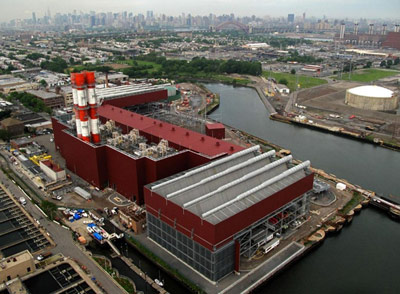 GDF SUEZ and International Power (70-percent owned by GDF SUEZ) in July announced that the Astoria Energy II plant in New York City (pictured) commenced commercial operation on July 1. The 575-MW gas-fired project, in which IPR-GDF SUEZ North America has a 30-percent equity interest, will sell its entire output to the New York Power Authority under a 20-year contract.The total project cost of Astoria Energy II is approximately US$1.3 billion. New York, along with the New England, Texas and Mid-Atlantic states, is one of the four key U.S. markets for IPR-GDF SUEZ North America.

"Developing an enhanced and strategic presence in the high-value New York City market has been a key objective for us," said Gérard Mestrallet, chairman and CEO of GDF SUEZ. "When we acquired our initial stake in Astoria Energy, the expansion of the project on the adjoining site provided an attractive option to add further value. The technology, location, and long-term supply contracts of the Astoria Energy facilities are all solid assets, and are well positioned to meet a strong demand for environmentally sound, in-city power production."

What's the price for going green? A second quarter report from Newmark Knight Frank on the U.S. "green office" marketplace in 16 major cities found Nashville, Atlanta and Denver to have the lowest total average asking rents per sq. ft. of such space, at $23.87, $24.55 and $25.70, respectively, while the national average asking rent was $32.80 per sq. ft. But how did those rates stack up when compared to rates in Newmark's "regular" office market reports? Nationally, the premium was 18.7 percent above the $27.63 average asking rent. In Nashville, green office space was asking 21 percent more, while the premiums in Atlanta and Denver were 26 percent and 22.4 percent, respectively.

Global investments in green energy are up nearly a third to $211 billion, according to the "Global Trends in Renewable Energy Investment 2011" report released in July by the United Nations Environment Program (UNEP), Bloomberg New Energy Finance and the Frankfurt School of Finance and Management. At the same time, government investment in renewables R&D is up by more than 120 percent, to well over $5 billion. "China and other developing countries are now the biggest investors in large-scale renewables, while Germany has surged ahead on rooftop solar," said UNEP. "In Kenya, geothermal energy is surging — even powering rose growers — and UNEP's new headquarters building in Nairobi [pictured] has one of the largest solar installations in Africa." 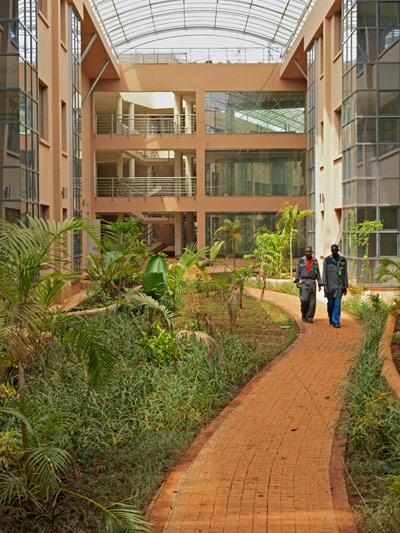 Chasing the energy efficiency gremlin? The American Council for an Energy-Efficient Economy (ACEEE) named four Champions of Energy Efficiency in Industry in late July. The 2011 winners are:

E-mail your comments or inquiries directly to editor@conway.com