A global firm’s investment on the U.S.-Mexico border illustrates the blurring of lines between infrastructure and manufacturing, and between power generation and storage.

The Rosita sub-station adjacent to Silicon Border connects to the power grid in California.
All photos courtesy of Rubenius
F

ounded by a man from Denmark, currently based in the UAE, and with offices in such locations as Moscow and Johannesburg, energy storage and smart grid firm Rubenius is nothing if not global. The company's latest foray is taking place at one of the globe's most fraught borders, tackling one of the energy sector's most daunting challenges.

Last fall, Rubenius purchased 346 acres (140 hectares) at the Silicon Border development near Mexicali in Baja California, Mexico, for the installation of a large utility-scale energy storage operation. Rubenius calls it "the world's first mega region energy warehouse," aka Energy Warehouse No. 1, and plans to roll out similar complexes in other emerging economies around the world. Ultimately Rubenius plans to install 1,000 megawatts (1 gigawatt) of sodium sulfur (NaS) energy storage batteries at a fully commissioned cost of over US$4 billion.

"The reason Rubenius chose this location is the U.S. grid is under expansion in the area, and at the Mexican border, the [Mexican] grid crosses our property into the U.S. and connects to the U.S. grid," says Daniel Hill, CEO of the 4,000-acre (1,620-hectare) Silicon Border technology park. "So from that location you have a lot of potential customers in California and even Arizona. And of course you're connected to the Mexican grid, which has large switches across the street from us."

According to a report published by Greentech Media in March, the giant batteries are being financed "with the help of Japan's Export/Import bank" and are made by only one manufacturer, Japan's NGK Insulators. In early 2010 NGK and other parties signed an agreement to develop large scale sodium sulfur NAS battery assets for use by EDF Energy in the United Kingdom. 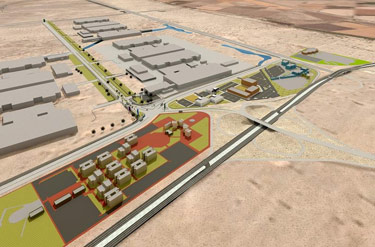 An artist's conception of the Rubenius project, which envisions nearly $4 billion of investment over five to seven years.

Initial project plans in Mexico call for a 50-MW battery to be installed within one year. "Rubenius is in the process of negotiating commercial contracts for that battery, and I'd say they're probably going to be completed in the next few weeks," says Hill, noting that he's observed Rubenius systems in action in Abu Dhabi, where the company's Amplex subsidiary has installed what it calls the largest energy storage system in the world.

"They're also working on a license with a utility-scale battery company, to have a license to produce their battery in this location," says Hill. "The idea is they would use the location for large-scale battery storage and also to manufacture batteries. We've done a lot to scope the size of the buildings and budgets to build this factory, and their intent is to possibly start construction toward the end of this year or early next year on this factory."

In addition to the grid connection, Silicon Border's amenities include a state university campus and collaboration with UC San Diego.

The U.S. transmission grid expansion is the Sunrise Powerlink project being pursued by San Diego Gas & Electric, with the purpose of linking renewable power in the Imperial County region of California to San Diego. The 117-mile (188-km.), $1.8-billion, 500-kilovolt electric "superhighway," like the Rubenius energy warehouse, will have a capacity of 1 gigawatt, and its schedule calls for it to be in service in 2012.

The Sunrise Powerlink project has bred other economic development activity as well: In March, in conjunction with a 25-year contract between SDG&E and a subsidiary of CSOLAR Development, LLC, a renewable energy company managed by Tenaska Solar Ventures, for up to 150 megawatts (MW) of solar energy to be generated at the Imperial Solar Energy Center (ISEC) West's proposed 1,057-acre solar energy facility near El Centro, Calif., Soitec, a French company, said it would build a new factory in the San Diego region to manufacture proprietary concentrated photovoltaic modules.

Multiple Hubs to Roll in Unison

The entrance to Silicon Border from Highway 2, near Mexicali, Baja California.

The company's border investment includes an R&D operation in San Diego, Calif. The U.S. location will include labs for smart grid products and services. The company expects to immediately employ more than 60 researchers, expanding to more than 200 employees for current products. The company says it will outsource many operations, creating more than 400 additional green jobs in the region.

"After a very successful roll-out of smart grid products in the U.A.E., including street lighting controls, smart meter installations, and utility scale batteries, we are confident we can be a significant contributor to communities and countries in America who are embracing renewable energy and improving the efficiency of scarce resources with an eco-friendly approach," said Claus Rubenius, the company's chairman and founder, last fall. Also speaking at the announcement was Mexican President Felipe Calderon.

"Once we showed them our attributes, which include the proximity to the manufacturing strength and the location of Silicon Border to Mexico, they decided to participate in our efforts to make this an energy and technology hub," said Calderon. "This is the kind of collaboration we should be doing more of among Mexico, the United States and private businesses from around the world. Our two countries offer the largest markets and workers who are second to none."

Rubenius says the storage project is expected to create more than 200 direct jobs and 800 indirect jobs in the region.

"After meetings with Mexico's President Calderon and the Minister of Economy, Bruno Ferrari, as well as various communities in Mexico, we felt a manufacturing base in Baja California will enable us to address markets throughout North America," said Rubenius. "Furthermore, we believe the regional approach to become a mega center of energy and technology on the border of Mexico and San Diego is the best way to capitalize on the strengths of the people and both countries."

The company credited the efforts of San Diego Mayor Jerry Sanders and the alternative energy promotion efforts of CleanTECH, San Diego Economic Development Corp., San Diego CONNECT and the State of California in helping it reach its investment decision.

In April, after five years of operating in the UAE, Rubenius officially moved its global operations offices to Dubai. Assisted by the emirate's Foreign Investment Office (Dubai FDI), the investment promotion arm of the Department of Economic Development (DED) in Dubai, the company said it moved there because of Dubai's "strategic location between Europe and Asia, excellent connectivity, business-friendly environment and easy access to global project financing, critical to the company's ongoing initiatives and growth targets."

"Rubenius establishing their headquarters in Dubai is an outstanding success for our joint efforts with Dubai FDI to promote bilateral trade and investment," said Jose Neif Jury Fabre, Middle East Business & Economic Affairs Minister at ProMexico, the trade and investment promotion agency of the government of Mexico. "We are confident Rubenius and its growth plans will continue to create strong grounds for increased engagement between Dubai and Mexico as we move forward."

Among the company's work areas is development of smart-grid systems that incorporate water use as well as power use. It also deploys technologies enabling off-grid locations to operate with dependable power, and plans to explore pilot projects for those technologies in Mexico.

"In developing markets such as Africa, South America and The Middle East, legacy utility infrastructure simply cannot keep up with the economic growth and increasing migration from rural to urban areas," explains the company's website. "The result is a huge utility imbalance," with more and more people leaving rural areas with poor utility infrastructure but in doing so inevitably increasing pressure on the already overloaded metropolitan grids. "The solution to this imbalance is to deploy purpose-built utility service systems operating independently of the national or regional grids," says Rubenius. "The Rubenius Off-Grid solution makes sense for suburban housing re-location projects but even more so for rural areas earmarked for growth in sectors such as technology parks, economic free zones, agriculture or mineral exploration."