Up From the Brine

A substance essential to clean energy development
prepares to emerge from a remote Chilean landscape. 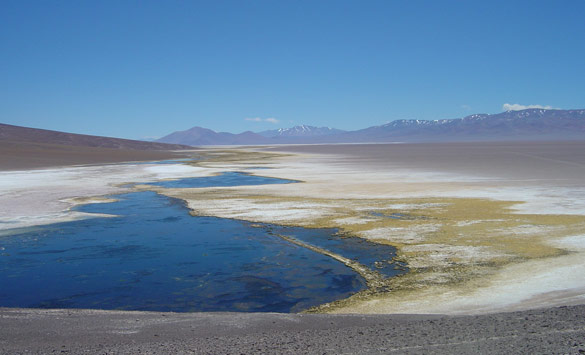 eruvian firm Li3 Energy, Inc., in May closed on its acquisition of 60-percent ownership in a group of six private companies that own the Maricunga Project in northern Chile, believed to be one of the top 10 lithium projects in the world.

"Li3 believes that once commercialized, the strength and merit of this acquisition could establish Li3 as a global leader in the lithium and minerals sector," said the company. Lithium is a primary material in demand by the legion of lithium-ion battery manufacturing operations now popping up the world over. And as documented in a May 2010 Site Selection article, South America is the world's lithium capital.

According to the U.S. Geological Survey, demand for lithium destined for battery usage is predicted to grow by 20 percent per year. The worldwide market for rechargeable lithium batteries is estimated to be worth over $4 billion/year. The automotive market alone is projected to reach $337 million in 2012, and $1.6 billion in 2015.

The Maricunga property is located approximately 100 miles (160 km) northeast of Copiapo in northern Chile, 143 miles (230 km.) from the international airport of Caldera, and 155 miles (250 km.) from the mining port of Chañaral. Li3's 3,665-acre (1,483-hectare) Maricunga project is in a formation known as a salar, or salt lake. Its low levels of sulphate in the brine reduce the need for extra reagents for sulphate removal, making future extraction more economically viable. This salar also features significant potential for the extraction of potassium, iodine and boron.

Also helping Li3 and others descent on the Maricunga is important road and power infrastructure already in place. "Infrastructure at the site includes the national highway bordering on the north and east sides of the salar and a power line running parallel to the highway," says a technical report prepared earlier this year by Toronto-based Hains Technology Associates.

"With the acquisition and initial exploration funding complete, and the recently announced Memorandum of Understanding with POSCO to explore a strategic relationship, Li3 will now enter the feasibility phase on Maricunga and begin the initial $3.8 million work development program on the project," said Li3 in May. "Li3 will continue to explore synergistic opportunities to further augment and strengthen this property and its land portfolio throughout the region."

The MOU with POSCO originally set to expire on June 30, 2011, was extended until August 31, 2011.  POSCO, one of the largest steel manufacturers in the world with $56 billion in annual revenues, invests in numerous global resource development projects and, according to Li3, has been actively evaluating and pursuing leading lithium projects globally.

In an update in July, Luis Saenz, CEO of Li3 Energy, said, "After concluding a week in Korea with POSCO's senior management team, advisors and legal counsel, I am extremely pleased that both companies have expressed a desire to continue working towards a mutually beneficial transaction. Our objective is to align the companies in a manner that provides Li3 with capital while minimizing dilution and still providing POSCO with a range of possible involvements including both financial and technological exchanges."

(On Aug. 25, 2011, the day after this story was published, Li3 reached a securities purchase agreement with POSCO Canada that will mean up to $18 million invested in Maricunga exploration and development.)

Among other interests, Li3 has purchased a Chilean company that held an option to acquire a 100-percent interest in the Alfredo Iodine and Nitrate Project in northern Chile. The option is currently under renegotiation. Li3 Energy plans to produce an iodine product and ship the potash from Maricunga in order to upgrade the Alfredo nitrate into a potassium nitrate fertilizer. The company also holds a 100-percent interest in the Loriscocha, Suches, and Vizcachas lithium salars in southern Peru, which are currently in the grassroots exploration stage.

"Upon closing of our planned acquisitions, these properties will provide the platform for Li3 on the primary production side to execute our business plan of rapidly developing a vertically integrated industrial chemicals production, manufacturing and sales company," says Saenz on the company's website.

Also active in the Maricunga is Mammoth Energy Group, which in late April announced that it intends to increase its investment and intends to acquire a total of 8,645 acres (3,500 hectares) in the salar.

In July, Mammoth said its wholly owned subsidiary Compania Lithium Investments Limitada of Chile has signed a Letter of Intent to acquire five concessions for a total of 2,471 acres (1,000 hectares) of lithium concessions located at Laguna Lagunilla situated in the Pica commune. All told, the company's lithium concessions come to some 16,000 acres (6,475 hectares) across Chile.

The Mammoth website provides the literal lay of the land:

"Lithium is the thirty-third most frequently occurring mineral so it's not exactly scarce, but concentrations are generally too low, and extraction too difficult and costly to be viable," it explains. "The major trend in the lithium industry has been a transition from hard rock mining-based sources of lithium to brine-based ones. The cost-effectiveness of brine operations forced even large producers in China and Russia to develop their own brine sources or buy raw materials from brine producers.

"The economics of obtaining lithium carbonate from brine are so favorable that most hard rock production has been priced out of the market. Lithium brines are currently the only lithium source that can support mining without significant other credits from tantalum, niobium, tin etc., (low manganese content within Nevada's Clayton Valley brines significantly reduces recovery costs, unlike Chile's high manganese content brine deposits). Lithium brine resources are now the preferred method of lithium recovery."

And that preferred method, it says, could lead to a preferred economy for those ready for a profound transformation:

"Like the hydrocarbon era that preceded it, the dawning lithium-hydrogen age carries its own set of risks and opportunities, as well as its own set of winners and losers," says Mammoth. "Nations that anticipate and position themselves for the transition are likely to reap an array of social, economic and environmental benefits."

This map depicts the world’s lithium deposits as tracked by the U.S. Geological Survey.