Power Management in the
Pacific Northwest

A region rich in renewable energy is under pressure to find bigger energy-storage
solutions. The goal is to avoid price hikes stemming from a
disconnect between hydro and wind power. 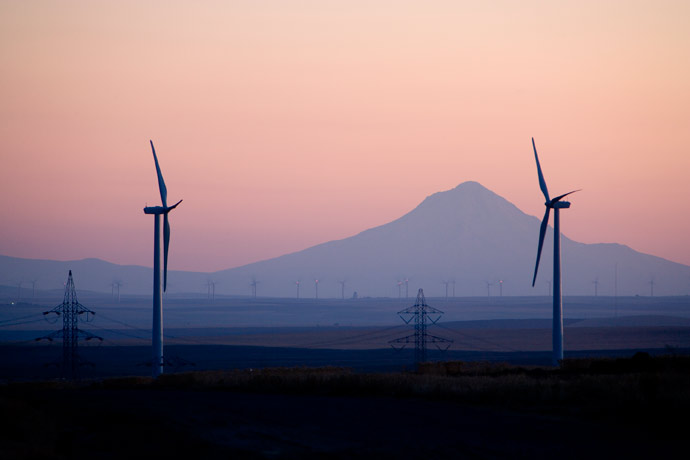 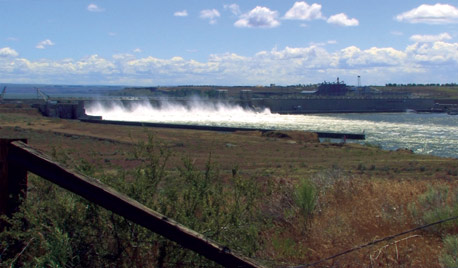 Heavy flows along the Columbia River disrupted the integration of hydro and wind power in the region last spring.
Photo courtesy of Bonneville Power Administration

ith plenty of wind and fresh water, the Pacific Northwest holds the country's greatest penetration of renewable energy, yet the region struggles to make those two resources work together. The challenge of integrating intermittent wind power is complicated by competing interests of power generators, salmon runs, and residents accustomed to cheap utility rates.

The Bonneville Power Administration (BPA) found itself at the center of these concerns when it curtailed wind power to compensate for abnormal river flows at hydropower stations following heavy snow-melt last spring. The Federal Energy Regulatory Commission (FERC) ruled this month that BPA's curtailment discriminated against wind power generators. The controversy emphasized the need to develop energy storage and demand response technologies that can absorb excess power.

BPA operates transmission lines and markets power for a large part of Idaho, Montana, Oregon and Washington. It also serves portions of California and other Western states. BPA has historically used hydropower generation stations along the Columbia River to balance the grid; the systems can be ramped up or down quickly. Intermittency associated with the region's 3,500 megawatts of installed wind capacity could increase to 6,000 megawatts by 2013, leading to more integration challenges.

FERC gave BPA 90 days to revise its tariffs for wind generators so they are comparable to the transmission service Bonneville provides to itself. Wind operators say they lost more than $2 million from the curtailment, which BPA said was necessary to safeguard fish and deliver energy without adding costs to its customers.

"Our problem all along was that they basically singled out one category of generator that has firm rights on their system," says Bob Gravely, spokesman for PacifiCorp, one of the wind power companies that complained to FERC.

Wind generators are pleased with FERC's ruling, but BPA customers worry it will increase utility rates. BPA's customers enjoy some of the lowest wholesale rates in the country – many utilities pay 3.9 cents per kWh during peak hours.

"Some of the wind energy is destined for our region, but the vast majority is targeted for the California market," says Phil Lusk, power resources manager of the City of Port Angeles, Wash. "I don't want to see Bonneville incur new costs for that transaction. That could increase the rate of my customers."

PacifiCorp's Gravely said energy storage will be crucial to balancing the various interests in the long run. Prior to the curtailment controversy, BPA began investigating large-scale, pumped hydro storage facilities in conjunction with the U.S. Army Corps of Engineers. The Pacific Northwest National Laboratory (PNNL) is also conducting a feasibility study of compressed air storage in porous rock. It would take years for construction of such capital-intensive storage projects.

In the short-term, municipalities and utilities hope that a $178-million smart grid demonstration project will provide up to 112 megawatts of respond resources. A pilot involving hundreds of homes with smart-meter-equipped hot water heaters has also shown promise.

The devices, linked to wind farms in the Pacific Northwest, are powered by excess wind electrons. The water heaters switch off when excess wind dies down. Tens of thousands of smart-grid-equipped water heaters could ostensibly provide hundreds of megawatts of demand response and energy storage, BPA officials say.

"It's probably premature to say we can scale up and solve all our problems with hot water heaters, but I think there is excellent work in progress," says Lusk of Port Angeles. "All of this stuff could be ramped up if the price signals were right."

Port Angeles is also developing a large-scale pilot designed to provide up to 40 megawatts of demand response capacity through a paper mill. BPA is looking to power management of municipal water systems and heavy industrial water users as well.

BPA's Hall says Fox Island, Wash.'s smart grid pilot may hold hope for the future. After a submarine transmission line failed in 2010, the Island had just one power line connecting it to the mainland. The old transmission line had a carrying capacity of 11,800 kilowatts with temperatures of 19 degrees. The island, however, typically used 12,000 kilowatts during peak winter months.

"It got us through the winter," White says. "I think it's going to be great technology." 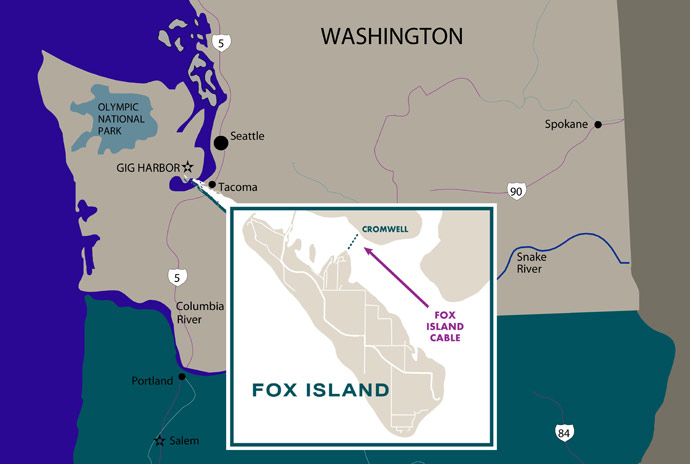