Fronius converts momentum into new sites in Indiana, Ontario and beyond.

Fronius will develop welding technology and solar inverter products and systems at its new U.S. headquarters at the Randolph building, a spec facility developed by Holladay Properties at the Portage-Ameriplex at the Port business park in Portage, Ind., where in late June Wolfgang Niedrist, managing director for Fronius USA sales; Indiana Gov. Mitch Daniels; and Thomas Herndler, head of manufacturing for Fronius USA, celebrated the company’s plans to create 512 jobs.
Photo courtesy of Northwest Indiana Forum
by ADAM BRUNS
A 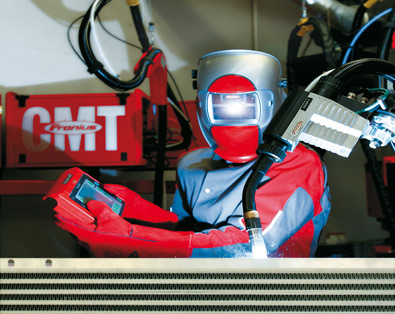 Fronius got its start in developing welding technology, which has now evolved to CMT, or cold metal transfer. “The wire movement was incorporated into the process control, whereby heat is inserted only very briefly,” explains the company. “Material transfer takes place with barely any flow of current. As a result, weld joints such as steel to aluminum became a reality.”
Photo courtesy of Fronius

fter its founding in 1945 in Pettenbach, Austria, Fronius International, a developer and manufacturer of battery charging systems, welding technology and now solar electronics, took 27 years to open its second facility. Lately the company, whose slogan is "Fronius converts energy," has also picked up the pace of its space conversions.

In late June, eight years after finally locating its first U.S. sales and service subsidiary in Brighton, Mich., in order to serve the automotive market, Fronius announced it would open a U.S. headquarters at the Portage–AmeriPlex at the Port development in Portage, Ind., sometime in the third quarter of 2012. Fronius will invest more than US$26.64 million to lease and equip 400,000 sq. ft. (37,160 sq. m.) of space in Portage to assemble and manufacture solar electronic inverters and welding technology products for the North American market. The headquarters will employ up to 512 people by 2016.

"Fronius is well-established, fast-growing and at the top of their field, exactly the kind of company we've rebuilt the Indiana business climate to attract," said Indiana Gov. Mitch Daniels.

"Indiana has a great business climate with a perfect infrastructure for us, including a good network of suppliers and skilled employees," said Wolfgang Niedrist, managing director for U.S. sales at Fronius.

The firm has already started hiring human resource and finance associates for its Portage headquarters. It plans to expand its procurement and production workforce to coincide with the completion of facility improvements next summer.

"We have worked closely with IEDC and the company representatives for many months through the recruitment process. It has been this partnership and open communication that has proven successful in having Fronius choose to locate in the city of Portage," said Portage Mayor Olga Velazquez. "We are extremely pleased to share the good news with our residents. Fronius will bring an entirely new high-tech industry to Portage and northwest Indiana. The skilled jobs created will keep our young people near home."

The Ameriplex at the Port development also recently welcomed a new 44,000-sq.-ft. (4,088-sq.-m.) regional operations center from Graycor. "We have a rich history in Northwest Indiana with many long-term clients, some who go back to our founding in the 1920s," said Tom Muchesko, senior vice president, Graycor Industrial. Graycor Industrial and Graycor Blasting have completed numerous projects for local steel mills, power plants and process facilities for clients such as ArcelorMittal, BP, Northern Indiana Public Service Co. (NIPSCO), Praxair and U.S. Steel.

The Timeline Speeds Up

Fronius appears ready to add its name to that list of industrial stalwarts. The company recently reported a 52-percent increase in sales compared with last year, due in part to its international expansion. The company owns 737 active patents and generated a total turnover of €499 million (US$706 million) in fiscal year 2010. The firm has launched new subsidiaries in Australia, Great Britain and Turkey: It now has 17 international subsidiaries and sales partners/representatives in more than 60 countries. Perhaps most promising to economic developers, 392 Fronius employees were working in R&D at the end of fiscal 2010 — nearly 10 percent more than in the previous year.

In addition to the extension of a production and logistics site in Sattledt, Austria; and a sales office in Wels, one of the largest R&D centers in Austria is being created in Thalheim. There's also a new regional head office being built in France; an expansion at the production site in Český Krumlov, Czech Republic; and a new production facility for solar inverters in Mississauga, Ont., Canada, where the first inverters rolled off the line in late March.

"With outstanding solar irradiance and one of the most ambitious economic incentive programs in the world for solar power, Ontario is an important growth market for the photovoltaic industry," said Fronius when it officially opened that Ontario facility this spring. While immediate hiring will total 40 employees, Fronius plans to create more than 100 jobs at the 22,000-sq.-ft. (2,044-sq.-m.) facility.

The production facility's assembly lines have an annual capacity of up to 250 megawatts and may easily be expanded to future demand. The company first established its welding technology division in Mississauga in 2007.

"Ontario has taken a great step forward with its solar incentive program, helping to make the supply of renewable energy a reality. We hope that other provinces replicate Ontario's Feed-in-Tariff program to decrease our carbon footprint and create new green jobs," said Romuald Goure, managing director of Fronius Canada, calling Ontario "one of the most important markets of the future for Fronius."

With the addition of the Portage location, Fronius will employ over 4,000 people globally, after adding 600 people in 2010. Here's a rundown of the company's facility development activity over its 66 years in business:

1986 A Fronius sales and production facility opens in Istanbul, Turkey.

1988 The firm purchases a location in Wels: Buxbaumstraße 2 (Austria)

1991 Opening of a sales and production facility at Kiev in the Ukraine.

2001 A brand-new production facility is opened in Pettenbach, Austria.

2002 Fronius launches a U.S. sales and service subsidiary in Detroit, focusing on the automobile industry.

2007 A new production and logistics center opens in Sattledt, Austria.

2010 A sales and support center opens in Chattanooga, Tenn., for the company's Welding Technology Division.

"The positive trend is set to continue in 2011," said Otto Schuster, global manager for marketing, sales and services, in announcing recent earnings. "The upturn of the automobile industry in particular offers great potential to the Welding Technology division. In the Battery Charging Systems division, we will expand the sales network to provide even better support to our key markets of intralogistics and workshops. We expect strong second half figures for the Solar Electronics division, as the governments in key markets such as Italy and Germany have given the green light for new photovoltaic funding models."

(L. to r.) The Fronius Canada team with the first Fronius IG Plus V inverter, which rolled of the assembly line at the end of March 2011 in Mississauga, Ont.; the central production and logistics site in Sattledt, Austria, recently expanded to meet demand for photovoltaic inverters; and the growing R&D site in Thalheim, Austria.
Photos courtesy of Fronius