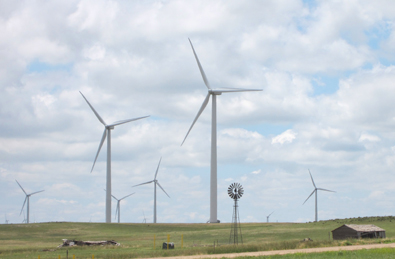 If the blades and towers for Cedar Creek 2 were placed end-to-end, they would stretch for 8 miles (13 km.).
Photo courtesy of Nordex USA
C

hicago-based Nordex USA announced last week the completion of the largest project ever undertaken by Nordex Group, as it commissioned the 60-turbine, 150-MW Cedar Creek 2 wind farm, located in Weld County in northeastern Colorado. Jointly owned by BP Wind Energy and Sempra Generation, the project's power has been purchased by Public Service Company of Colorado, an Xcel Energy company, under a 25-year agreement. The mile-high altitude required some special adaptations, including increasing the turbines' heat exchanging capacity.

"Our relationship with BP dates back to 2002 when Nordex first supplied turbines to one of their refinery sites in the Netherlands," said Ralf Sigrist, president and CEO of Nordex USA, Inc.

Nordex is one of the few wind turbine producers with more than 25 years of experience, now operating in 19 countries and employing over 2,600 people worldwide, including more than 200 in the United States. There are currently more than 4,400 Nordex wind turbines rotating in 38 countries with a total rated output of more than 6,600 Megawatts.

Not far away, the U.S. Department of Energy's (DOE) National Renewable Energy Laboratory (NREL) and the State of Colorado in June formed the Colorado Center for Renewable Energy Economic Development (CREED) in Golden, Colo. CREED is currently working with more than 25 stakeholders — governmental partners, universities, industry associations, venture capital organizations, and small businesses — in part to improve the access these groups have to technologies developed at NREL and to provide services such as classes and workshops for entrepreneurs.

"Leveraging the resources of DOE, NREL, the State of Colorado and industry — all under one roof — simply makes sense," NREL's Senior Vice President for Commercialization & Deployment Casey Porto said. "By making it easier to work with one another and communicate on a regular basis, we will enhance our ability to drive sustainable economic development and job creation." Colorado ranked fifth in Site Selection's 2011 Sustainability Rankings.

Trying to form coherent policy to attract your own clean energy business cluster? The same agency earlier this year issued "State of the States 2010: The Role of Policy in Clean Energy Market Transformation." The report builds on a clean energy data book published by the DOE in fall 2010. Among its findings:

U.S. Trade Representative Ron Kirk announced in June that China has ended certain wind power equipment subsidies. The United States had challenged the Special Fund for Wind Power Equipment Manufacturing (Special Fund) subsidies at the World Trade Organization (WTO) following an investigation initiated in response to a petition filed by the United Steelworkers (USW). The subsidies took the form of grants to Chinese wind turbine manufacturers that agreed to use key parts and components made in China rather than purchasing imports. The United States estimated that the grants provided to Chinese companies since 2008 could have totaled several hundred million dollars. The size of the individual grants ranged between $6.7 million and $22.5 million.

"This outcome helps ensure fairness for American clean technology innovators and workers. We challenged these subsidies so that American manufacturers can produce wind turbine components here in the United States and sell them in China. That supports well-paying jobs here at home," said Kirk. This is the third successful WTO challenge that the United States has brought against Chinese government subsidies.

Elsewhere in China, Earthsafe, a specialized company that provides integrated engineered fuel systems for critical power applications, just completed the commissioning of an emergency power fuel system for the new United States embassy in Guangzhou, China. The company had worked on the project for three years. 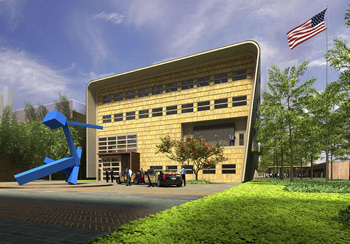 An artist's rendition shows the new US Embassy in Guangzhou, China, where Earthsafe has installed an emergency power fuel system.

The embassy fuel system consists of numerous underground tanks that have a combined capacity of over 100,000 liters. A series of submersible pumps transfers the fuel to a network that operates multiple generators, which are located throughout the 7.4-acre site. Earthsafe worked closely with construction company China Huashi Enterprises Company Ltd. and the architectural and engineering firm of Skidmore, Owens and Merrill. The embassy consists of seven buildings, many of which have innovative and environmentally friendly features. For example, several of the buildings feature "green" roofs covered with plants that mitigate thermal loads by providing insulation, and also minimize storm water run-off. Other rooftops are covered in white stone to reflect heat and minimize heat gain.

The compound is located in the Tianhe District, Pearl River New Town development area of Guangzhou, two blocks from the Pearl River.

Which state known for certain power-hungry politicians also boasted the lowest-cost industrial power prices in the nation in 2009, the most recent year for which figures are available? This page from the Energy Information Administration tells you the answer.

The U.S. DOE's Energy Efficiency and Renewable Energy division has a deep reservoir of data that may directly contribute to your company facility portfolio's energy costs. First, there's this searchable database of incentives for industry. Second, there's this more general state-by-state database provided through the DOE's Industrial Technologies Program, which is all about helping industry use energy more efficiently. A recent search for all incentives offered by utilities, for example, yielded 3,316 results. The data was just updated this month. 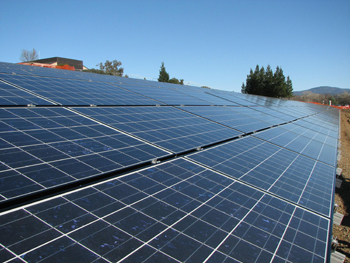 In late June, Butte College, located 75 miles from Sacramento and resting on a 928-acre wildlife refuge, became the first college in the history of the United States to go 'grid positive,' meaning that it will generate more electricity from its solar arrays than it consumes and will deliver power back to the electric grid. The college, which has an annual enrollment of 21,000 full- and part-time students, estimates that it will save between $50 million and $75 million over 15 years, even after accounting for project costs and interest, by eliminating its electricity bill, getting paid for excess electricity production, and avoiding future electricity rate increases.

Butte College now operates a total of 25,000 solar panels (pictured) that will generate over 6.5 million kilowatt hours of electricity per year – enough to power over 941 average-sized homes. The school has earned a number of national awards for sustainability leadership including the Association for the Advancement of Sustainability in Higher Education (AASHE) 2009 Campus Leadership Award and the 2009 Environmental Protection Agency (EPA) Green Power Partnership Award.

Butte is a single campus district located near the geographical center of Butte County, California. It has centers in Chico, the largest city in the district, and Orland in Glenn County. Because of its rural location, the college is unique among California Community Colleges because it operates as a self-contained city. It has its own water system, maintains its own sewage treatment facility, and operates the largest community college transportation system in California. The college implemented its first solar energy project in 2005 and its second in 2008.

The comment period ended yesterday for the EPA's proposed changes to rule 316(b), which figure to substantially affect the manufacturing and energy sectors. Here's a link to the EPA's home page for the regulation, and here's a link to a recent white paper on the topic from Omaha-based AEC firm HDR.

BioSAT, which stands for biomass site assessment tools, fuses layers of spatial and economic data together to create a relational database for geographic-based economic cost assessment for woody and agricultural residue biomass collection or processing demand centers. The resolution of the BioSAT model is by five-digit zip-code tabulation area (ZCTA) for the 33 Eastern states.

A report due out this month from the European Wind Energy Association (EWEA) sets out targets for the amount of wind power the industry expects to be able to deliver in 2020, 2030 and 2050. It aims to provide European policy makers with a clear understanding of the significant contribution wind energy can make in terms of energy security, CO2 reductions and employment, ahead of the publication of the European Commission's 2050 Energy Roadmap, due in the autumn.

The report shows that by 2020 most EU countries will have at least tripled their wind power capacity reaching a total installed capacity of 230 gigawatt (GW) by 2020 - providing 15.7% of EU electricity depending on demand. 190 GW would be onshore and 40GW offshore. By the end of 2010, 84 GW of wind energy capacity was operating in Europe, meeting 5.3% of EU power demand. Below is a chart showing the multiples by which EU countries will be increasing their wind power output: