Like a mega-sized game of parkour, a new project will see solar
wattage leaping onto the grid from select industrial roofs somewhere among 28 states. 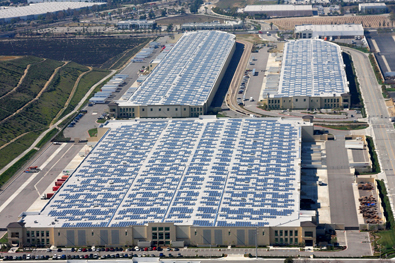 A 7.6-MW system atop four Prologis distribution centers in Ontario, Calif., was completed in 2010, and is owned by Southern California Edison.
Photos courtesy of Prologis
T

he onset of summer last month saw the onset of a remarkable distributed rooftop solar generation project by a company that may lead the world in total rooftop acreage.

That would be Prologis, which joined with Bank of America Merrill Lynch and NRG Energy to announce an offer of a conditional commitment from the U.S. Department of Energy's Loan Programs Office to help finance the largest distributed rooftop solar generation project in the world. The loan guarantee supporting US$1.4 billion of debt facilitates a total project size of about $2.6 billion, which is being financed entirely by the private sector over the next four years.

BofA Merrill is acting as sole financial and structuring advisor and sole lender on this transaction, which is being executed under the Department of Energy's Financial Institutions Partnership Program (FIPP). Through FIPP, the DOE will guarantee 80 percent of the $1.4 billion debt financing for this transaction. The transaction is part of BofA Merrill's 10-year, $20-billion environmental business initiative, which focuses on addressing climate change by aligning its global financial products and services to help advance energy efficiency and low-carbon energy markets.

Once fully funded and completed, rooftop solar installations across the 28-state portfolio of Prologis warehouses are expected to provide approximately 733 megawatts (MW) of energy, enough to power approximately 100,000 homes. The project will nearly double the amount of grid-connected solar generation currently online in the U.S.

As of March 31, 2011, on a pro forma basis giving effect to the merger with AMB, Prologis owned or had investments in, on a consolidated basis or through unconsolidated joint ventures, properties and development projects expected to total more than 600 million sq. ft. (55.7 million sq. m.) in 22 countries. That's equivalent to 14,000 acres (5,666 hectares).

According to an annual report on renewable energy investment trends issued by the UN Environment Programme (UNEP) earlier this month, solar panels on rooftops in Europe, helped by feed-in tariffs and dropping costs for photovoltaic modules, were a significant part of that region's contribution to last year's 32-percent rise in green energy investments worldwide. "Last year, investors pumped a record US$211 billion into renewables," said the report, "about one-third more than the US$160 billion invested in 2009, and a 540-percent rise since 2004."

NRG Energy has committed to be the lead investor for the first phase of the Prologis project over the next 18 months. NRG owns the largest solar photovoltaic plant currently operating in California and has more than 2,000 MW of solar projects under development or in construction across the United States. In addition to funding the first phase of the project, NRG Energy has a right of first offer for the remainder (up to the program total of 733 MW) and will provide development resources and project expertise for the installations.

As part of the first phase, 15 MW of solar capacity is ready immediately for construction and installation in Southern California, where the power generated will be sold to a yet-to-be-identified local utility under long-term power purchase agreements that have been approved and executed. Prologis in the past has worked extensively with Southern California Edison on other rooftop solar generation projects.

"As one of the world's largest owners of distribution facilities and an active solar industry participant, we're pleased to be a partner in a project of this magnitude," said Drew Torbin, vice president of Prologis Renewable Energy.

Torbin says the closing of the transaction will take another two to three months.

"When we have that guarantee, we can draw down on that guarantee," he says. Asked which technologies will be used, he says Prologis will select technologies specific to the project's phases, and which provide the best fit with an area's solar irradiance, incentives and building codes, among other factors.

Up to now, Prologis has been involved with two significant utility-owned solar generation programs, says Torbin, one with Portland General Electric in Oregon, and another with Southern California Edison that will eventually produce 100 MW.

With the SCE project, the utility owns the system and Prologis leases the roof space. This project, however, will involve ownership of the facilities by an LLC, which will sell the power, with the utilities playing the role of off-takers.

Torbin says anybody who's flown over rooftops near airports can see the potential of those buildings for solar panels, but "look into it, and you find out a lot of those rooftops are owned by different parties. To aggregate meaningful square footage can be time consuming. We bring scale to the program right away." The sense of scale extends to the funding side of the equation, with one supplier of debt and one supplier of equity 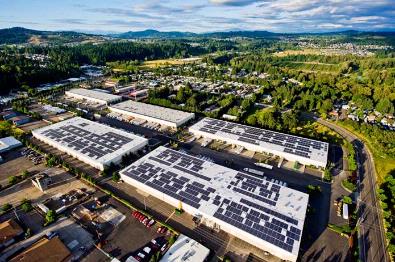 Solar panels capable of producing 1 MW are installed on three Prologis facilities in Clackamas, Ore. The installation was completed in 2010, is owned by Portland General Electric and US Bank and is not a part of the newly announced Prologis project.

"What you get is a distributed rooftop program with benefits like speed to market, efficient pricing and security — because these are buildings that are 30 to 40 feet in the air — but more importantly, size," Torbin says. "One roof can produce two to three megawatts, and the bigger roofs can produce eight to 10 megawatts. Aggregate a few of those, and you can offer a scale that a utility finds attractive, with all the benefits that rooftop solar brings. To find that scale [before], they've had to go to ground mount projects."

Such solar farms can often be perceived as eyesores, which gives the roof-mounted generation yet another advantage: aesthetics. "Drive by one of our buildings with solar on the roof, or even walk by," says Torbin. "I don't' think the common person will have any idea three's any solar on that roof."

Torbin says rooftop distributed generation can compete with ground-mounted solar farms on price, and he thinks there will be more public demand for rooftop, based partly on the fact that it brings solar power closer to their communities. Rooftop also can get done more quickly on average.

"Rooftop in many jurisdictions can get a permit in one to three weeks," he says. "Ground mount can take months or years to get permits."

Yet another positive factor for the project is the location of the distribution facilities, which Torbin says are "fantastic places from which to distribute power" for the exact same reasons they are good for distributing goods: near population centers, right on the grid.

Torbin says it was his first time working in depth with the federal government, and he was pleased by the caliber, work ethic of the DOE personnel with whom his team interacted. Denver-based Prologis has also benefited over the years from having the DOE's National Renewable Energy Laboratory located in nearby Golden, Colo.

As the project moves forward, the scope is limited only by the scope of the 28-state Prologis portfolio.

"We'll be focusing on markets that have active incentive mechanisms to support these types of installations," Torbin explains. Then within those markets, the team will examine such factors as size, type, age and structural capacity of rooftop, and location on the grid. He says that data is already in hand, making for a rapid due diligence process.

"The states we end up building in will have attractive incentive mechanisms and good solar irradiance," he repeats. "We have projects in California, Oregon and Colorado. But we'll be looking to build in the East and in every other state where it's possible."

Torbin says the level of incentives support fluctuates wildly, but because so many territories and utility districts offer programs, Prologis benefits from the flexibility such a large portfolio offers.

"If, for example, California activity declined in the next few years, we have 27 other states to focus on," he says. Most states Prologis operates in have incentives, with California and New Jersey among the leaders.

Interconnection is another big hurdle, Torbin says, especially in some of the more active markets such as in those same two states. But again, sizable property holdings can offer an advantage.

"Quite often our parks are so large, we can only be in our own way, to some degree," he says. "We may have enough buildings in an area, to control the amount of megawatts in queue on that circuit." He says storage is not an issue. Instead, "it's the capacity of the grid at that point to take all the electricity." If the infrastructure is not robust enough to do so, the project can occur only after that infrastructure is upgraded.

Essentially what Prologis has done is transfer its skills as developer, owner and manager of distribution facilities to the construction and management of solar installations on those facilities' rooftops. That leadership is needed in the industrial property space.

Prologis is a platinum member of the Greenprint Foundation, a worldwide alliance of real estate owners, investors, financial institutions and other stakeholders committed to reducing carbon emissions across the global property industry, which yesterday released Volume 2, 2010 of its Greenprint Performance Report, which analyzes 1,623 properties and 333,692 sq. ft. (31 million sq. m.) of commercial space across 44 countries.

Industrial represents approximately 17 percent of that sample. The nine buildings in the Americas that were part of that industrial sub-sample had a high energy-use intensity index (energy use divided by square footage of the space) of 335, compared to 57 properties in the EMEA region with an index of only 100. Some of that difference may be attributable to differences in support policies. As the report notes: "Median energy intensities vary geographically due in large part to activities undertaken at the property level, local climate and regulatory structure."

The proportion of energy from renewable sources essentially remained the same from 2009 to 2010, said the Greenprint report, as did procurement of renewable energy from offsite sources. "However, investment in onsite renewable energy, such as solar installations, increased, averting 0.03 percent of emissions in 2010."

The Prologis project will be doing its part to move that decimal point in a sustainable direction. 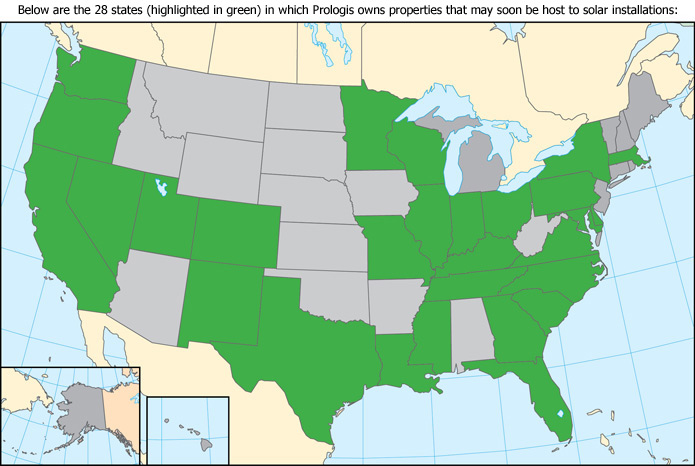