As all eyes are on his state’s generous energy tax credit programs,
Oregon’s governor calls for a larger, long-term perspective. 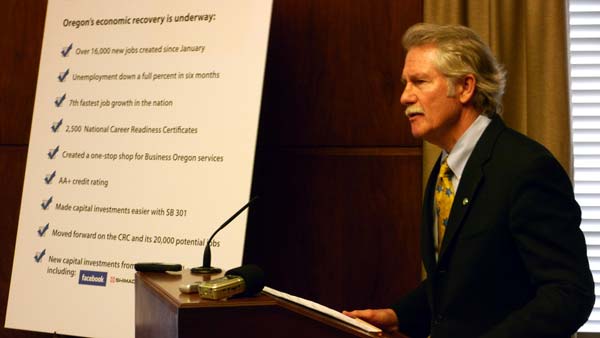 Highlighting the 16,000 jobs created in Oregon in just the first four months of 2011, Gov. John Kitzhaber in May declared the state’s economic recovery under way. He sees clean-tech development and renewable energy as key to future job growth and business investment.
Photo courtesy of the Office of the Governor
by Adam Bruns
T 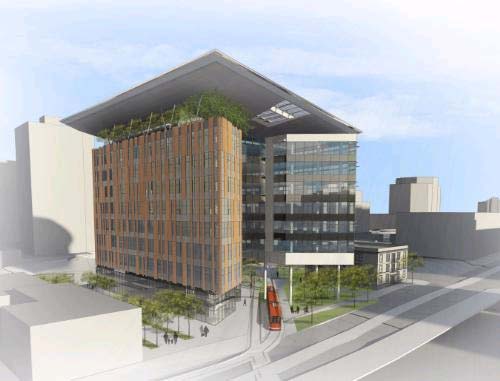 Full Circle: The Oregon Sustainability Center, a project led by the Oregon University System, Portland Development Commission, the City of Portland Bureau of Planning and Sustainability and the Oregon Living Building Initiative, in May selected Sanyo/Inspec as its solar technology provider. Sanyo Solar of Oregon’s manufacturing plant in Salem, which employs more than 200 Oregonians, will produce the solar wafers that are a critical component in the PV systems proposed for the center. Inspec, a local firm, will manage the system design and installation for the building.
Photo courtesy of PRNewsFoto/SANYO North America Corp.

here’s no denying Oregon’s leadership when it comes to energy and environmental awareness. Even with a conservation mindset, it’s used that reputation to great effect in economic development, attracting major facilities from solar and wind companies, among others, in recent years. Whether its 36-year-old department of energy (ODOE) continues to help lead the way, however, is up in the (clear) air at the moment.

In an interview, Gov. John Kitzhaber, back for a return engagement after two terms that ended a decade ago, says the focus on a new energy economy will be part of his trade mission in September to China, Japan and Korea, the state’s top three trading partners historically.

Among the projects Kitzhaber’s already been involved in cementing for Oregon is Solopower’s 300-job thin-film solar cell and module manufacturing facility in Wilsonville, located in Clackamas County just south of Portland. Initially employing 170, the $340-million plant, when fully built out to its planned 300-MW capacity, will employ up to 500. In addition to support from a U.S. Dept. of Energy conditional loan guarantee for $197 million, the project is also benefiting from a recommended $20-million loan from the Oregon Dept. of Energy (ODOE), as well as another $20 million from an applied-for Business Energy Tax Credit (BETC).

The state has taken some heavy criticism for the BETC program’s relatively loose criteria, which have allowed many different kinds and sizes of projects to benefit. According to a March report in The Oregonian, "State revenue officials estimate that in the decade between 2007 and 2017, Oregon will have spent more than $1 billion in tax dollars on green energy incentives."

As it happens, that’s the precise value of energy savings and new renewable energy generation achieved in 2009 alone, thanks to BETCs granted, according to ODOE.

"ODOE offers tax credits to businesses encouraging them to invest in energy conservation, renewable resources, renewable energy manufacturing, recycling, alternative fuels, transportation efficiency and sustainable buildings," explains the agency in its 2011-2013 energy plan. "The owner of a project may transfer or pass-through the tax credit to an Oregon business in exchange for cash payment. The project owner may be a public or non-profit institution. The Business Energy Tax Credit (BETC) is 35 percent of the eligible cost of the project. The tax credit may be taken in one year for projects under $20,000. For larger projects, businesses take 10 percent of the credit in the first and second years and five percent each year thereafter. The 2007 legislature increased the BETC to 50 percent for renewable energy projects, which is taking 10 percent per year over five years. The 2010 Legislative Special Session placed a $300 million cap on the amount of tax credits that could be issued for renewable energy resource projects. Besides a cap, HB 3680 in 2010 also set up a tiered system for evaluating renewable energy proposals, and provided a list of selection criteria."

Asked to respond to those who say the program in the past has given away too much for too little in return, Kitzhaber says, "I think it had an incredibly wide scope, and it wasn’t very focused. But we leveraged a huge amount of private investment from that. There’s no question it brought a huge amount of economic activity into Oregon when we needed it," including projects from SolarWorld and Sanyo. "It could have been much more narrowly focused, had a clearer ROI and greater transparency. But it really did serve to build our reputation in energy conservation, transportation and advanced clean-technology manufacturing, which are a huge part of our future." Kitzhaber says the program will "definitely be scaled down a lot, but we hope to retain some aspects, including giving some advantage to biomass development."

Where There’s Wood There’s a Way

Among the first job creation steps he took on coming into office in January were to direct the ODOE to perform an energy audit of 500 Oregon schools, and to ensure that a preference for biomass boilers was included in school retrofit programs. He also aims to ensure that EPA regulation of biomass reflects the beneficial carbon profile of woody biomass in the Northwest.

Kitzhaber notes that the state still has a robust wood products industry, but says biomass is part of a forest products approach focused as much on forest health as on exports.

"There’s a huge opportunity to develop a woody biomass industry in rural parts of the state," he says. "We can improve our timberlands, but maintain mill capacity and use those products for biomass."

According to the ODOE 2011-2013 energy plan, "based on estimates from biomass inventory and assessment studies conducted during the past decade, a range of 424 to 524 million gallons of gasoline-equivalent biofuel and other alternative transportation fuels a year could be produced from Oregon biomass feedstocks. This represents approximately 20 to 24.6 percent of Oregon’s consumption of gasoline and diesel (2.172 billion gallons as of 2008). If only waste sources of biomass were used, and no crops, 182to 282 million gallons of gasoline-equivalent biofuels and compressed natural gas could be made from biomass waste in Oregon."

In May, ODOE and Business Oregon selected combined-heat-and-power and thermal power projects from Prineville Sawmill Company in Prineville; Blue Mountain Lumber Products in Pendleton; and Ochoco Lumber in John Day to receive grants from the Forest Products Energy Project. The agencies also announced a second round of grant offerings. Existing local forest product companies in Oregon can compete for the grants, which evaluate the feasibility of using biomass for renewable energy production.

The Times They Are Returning

As of 2008, according to the Energy Information Administration, Oregon ranked 38th in the country in energy consumption. And while residential and commercial electricity rates rose between 2009 and 2010, industrial rates actually declined, from 5.71 cents per kWh in 2009 to 5.65 cents per kWh in 2010, helped in part by the predominant role of hydropower in the state.

The Oregon Dept. of Energy has been around since 1975. One of its foundational documents that year was a book called "Transition, A Book on Future Energy: Nuclear or Solar," which contained the following passages:

"…as energy prices rose, it became apparent that the energy systems so many had taken for granted were almost entirely outside of our control. In fact, about 95 percent of the energy we use in Oregon is imported."

The state’s Small Scale State Energy Loan Program (SELP) and Business Energy Tax Credit (BETC) program were passed into law in 1979. In 2007, in the same year that the Oregon legislature passed the Renewable Portfolio Standard, the Renewable Fuel Standard and created the Global Warming Commission, the BETC expanded to a 50-percent tax credit for renewable energy projects. And in 2009, ODOE’s Energy Loan Program expanded through HB 2626, "allowing SELP to finance a large volume of smaller loans to individuals and to businesses for energy efficiency and sustainable technologies," says ODOE in a chronology published in its most recent biennial energy plan.

That same year, however, ODOE was directed to conduct a financial analysis of the Business Energy Tax Credit program by HB 2180.

The following passage from that report provides the lay of the land for BETC:

"From its creation until 1999, the BETC program was capped at a maximum of $40 million in tax credits issued per year with no more than $2 million for any one project. The 1999 legislature eliminated the $40 million tax credit cap and increased the amount of any single BETC to $10 million per project. In 2007, the legislature raised the limit for renewable energy manufacturing facilities and high efficiency combined heat and power projects to $20 million per project. Perhaps the largest expansion of the program came in 2001 when the pass-through option was opened to non-profits, public entities, tribes and others. Until that time, those groups could not use the Business Energy Tax Credit program because they had no tax liability. More recent changes have again put limitations on BETC with a program cap and implementation of a competitive tier system for renewable resource projects. The BETC program is also facing sunset dates of July 1, 2010 for renewable resource and conservation projects. Renewable energy manufacturing is scheduled to sunset on January 1, 2014."

In 2010, according to the report’s chronology, "House Bill 3680 extends the renewable energy manufacturing BETC to a sunset date of January 1, 2014. BETC for all other projects sunsets on July 1, 2012. There is a $300 million cap for preliminary certifications of all renewable resource projects for the biennium ending June 30, 2011. The tax credit for a wind projects over 10 MW is also reduced. The bill also imposes a tier system with criteria for awarding preliminary certifications for renewable resource projects."

The BETC criticism has heightened scrutiny of ODOE in general. One legislative measure earlier this year sought to abolish the department outright. HB 2900 would abolish the Oregon Department of Energy and shift its responsibilities to the Public Utilities Commission (PUC), the Oregon Business Development Department (OBDD), and a newly formed Office of Energy (OOE). "Although the House Committee on Energy, Environment, and Water did not send HB 2900 on to the full house, the co-chairs have decided the proposal is very important and will hold a hearing or informational meeting on it in either May or June," said a League of Women Voters legislative synopsis in April. The committee’s most recent action was a work session held on April 19.

Beyond the housekeeping of which agency takes on what responsibilities, Kitzhaber sees a larger need.

"The real problem I have with the BETC itself," he says, "is that we need a 10-year energy plan that shows how we’re going to meet our Renewable Portfolio Standard and carbon reduction goals, so we can see how our incentives are aligned with that plan," as well as with advanced manufacturing goals.

A draft of the 10-year energy plan, including topics such as transmission siting, is expected in early July. "Having that kind of plan in place," says Kitzhaber, "will make Oregon an even more attractive location for companies who can see what their role will be over that investment period."