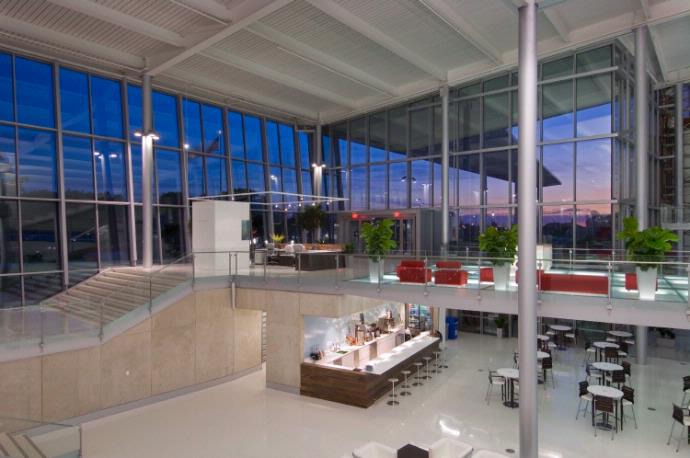 Among the 245 competitors in the EPA’s national building competition to reduce energy use intensity is Haworth’s global headquarters in Holland, Mich., which starts from an already high-performing base as a LEED-Gold certified building.
photos courtesy of Haworth
by Adam Bruns
"T 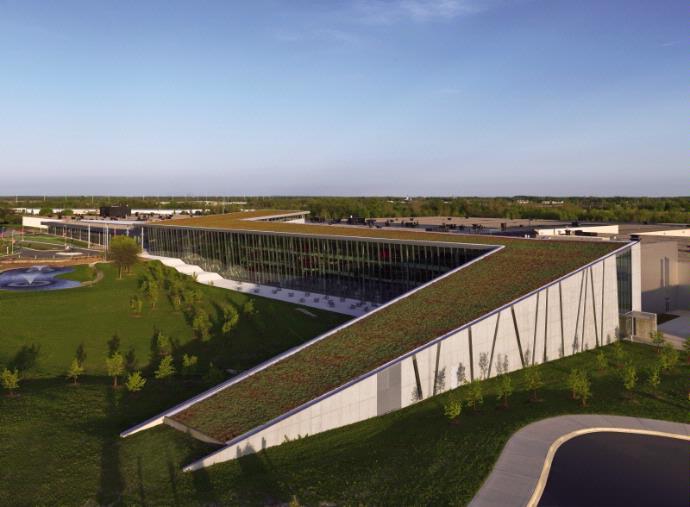 The 44,000-sq.-ft. (4,088-sq.-m.) live roof at Haworth’s headquarters is one of the largest modular green roof installations in North America.

he World Is Flat" author Tom Friedman noted in a June column that the world is also quite fat: Specifically, that the Global Footprint Network calculates that our current growth rate is using 1.5 earths' worth of resources, thus "eating into our future," wrote Friedman.

Proof of growing energy awareness comes in the form of this year's second annual EPA Energy Star "Battle of the Buildings" national building competition, which got under way in early May. Buildings are evaluated according to their Energy Use Intensity (EUI), which is calculated by dividing the amount of energy a building consumes in one year (measured in kBtu) by its total floor space. The building with the greatest one-year reduction in EUI between Aug. 31, 2010, and Aug. 31, 2011, is declared the winner, though the EPA adjusts each building's percentage to normalize for weather, thereby ensuring that no building is credited or penalized due to changes in weather over the course of the competition.

EPA Press officer Stacy Kika says the agency can't share its EUI tracking so far, but says the next update will be announced July 27. Asked whether other criteria besides straight EUI improvement will be used to cull down the initial group, she says, "We expect that announcement to highlight 10 to 15 buildings of diverse types, locations, sizes, energy intensity, etc."

Last year's 14 buildings reduced their energy consumption by more than 44 million kBtu per year, saved more than $950,000, and reduced greenhouse gas emissions equal to the annual electricity use of nearly 600 homes. Lighting changes were among the most popular steps taken. For instance, changed 240 incandescent bulbs to compact fluorescents intheir meeting suites — saving an estimated $6,920 annually.

The winner of last year's competition was Morrison Residence Hall at the of in , which reduced its EUI from 213 to 137, a 35.7-percent drop in one year, saving more than $250,000 on energy bills. A Sears store in , , came in second place with a 31.7-percent energy reduction, and a JCPenney store in , snared third place with energy savings of 28.4 percent.

The top 10 states with entries account for 162, or two-thirds, of the total competitors. The numbers may speak to heightened environmental awareness in those territories, most room for improvement, or some combination of the two. Also factoring is healthy competitive instincts, especially involving schools. UNC again has a couple residence halls in the mix. And individual cities with numerous entries are led by such communities as and , , and , all three of which feature school entries.

In order of number of competitors, the leading states are:

The breakdown by building type is as follows:

Twenty-five other buildings include a library, a fire station, university buildings, museums, a convention center, and a performing arts center. And one of them is the U.S. Mint, as it tries to raise its green profile beyond the color of its currency.

As far as major developers and property managers go, a whopping 17 contestants were entered by USAA, followed by nine from Jones Lang LaSalle and six from CB Richard Ellis.

While many of the facilities are from the public sector, among the corporate and private-sector contestants are Kimberly-Clark's world headquarters in Irving, Texas (current EUI: 295.3); Haworth's LEED-Gold headquarters in Holland, Mich. (EUI: 135.5); the appropriately named Energy Plaza building in Dallas, Texas (EUI: 230.4); Caterpillar's AC building in Mossville, Ill. (EUI: 282.2); Intuit facilities in Tucson, Ariz. (EUI: 300.2) and Reno, Nev. (292.1 and 467.3) and Boeing Building 4 at the 350-acre Central Ohio Aerospace and Technology Center (COATC) campus in Heath, Ohio, with a relatively high EUI of 574.3, and thus a promising chance to show the most improvement.

Some are starting from an advanced energy-efficiency position. The Greater Waco Chamber's building was just built in 2007, is already LEED-Gold certified, and is 22-percent more energy-efficient than a standard comparable building. It has one of the lowest starting EUIs in the competition, at 68.9.

"We are committed to improving our energy efficiency," said Chamber President and CEO Jim Vaughan at the start of the contest in May, "and we look forward to seeing how the country's first green chamber building measures up against other buildings across the nation."

Some Tips from the Pros

The following tips were collected from contestants in last year's national building competition: