A Site Selection Web Exclusive, May 2011

Proximity to ports and to fiber determines facility locations for Enviva. 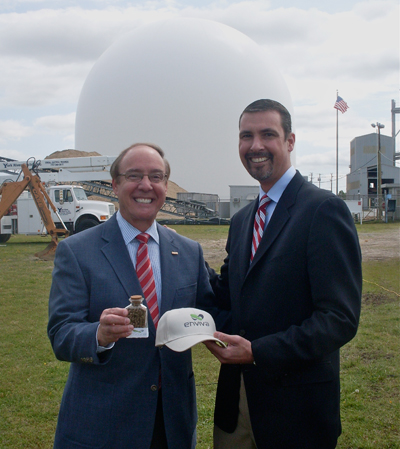 On May 11, Enviva Biomass inflated a 157-ft. dome manufactured by Idaho-based Dome Technology at its new port terminal facility in Chesapeake, Va., where Enviva will have the capacity to export 3 million tons of biomass annually. Above, Dr. Alan Krasnoff (left), mayor of Chesapeake, celebrates with John Keppler, chairman and CEO of Enviva.
Photo courtesy of City of Chesapeake
T 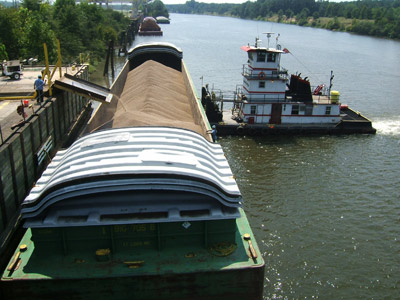 Enviva loads pellets onto a barge on the Tenn-Tom Waterway from its facility in Amory, Miss.
Photo courtesy of Enviva

he past year has been filled with progressively busier project location and construction activity by biomass fuel firm Enviva, which until last year was known as Intrinergy. And there's even more on the immediate horizon.

The seven-year-old firm, now based in Bethesda, Md., after relocating from Richmond, Va., has only been supplying its products since 2007. It received a hefty investment in March 2010 from private equity firm Riverstone Holdings. In August, Enviva, described as part of Intrinergy Holdings LP, acquired CKS Energy Inc., a privately held company that manufactures wood pellets for industrial, commercial and residential uses.

Based in Amory, Miss., CKS was one of the few U.S.-based companies with a successful track record of manufacturing and exporting sustainable, high-quality wood pellet biomass fuel for utility customers, said Enviva. Most of those customers are based in Europe, where the use of wood pellets is well integrated into all areas of the energy sector.

Enviva immediately announced it would double the Amory facility's capacity to approximately 100,000 tons a year, sourcing material locally from the plentiful "wood basket," mainly pine, stretching from Mississippi across to North Carolina. Pellets from that plant, located along the Tennessee-Tombigbee Waterway system, are exported through the Port of Mobile. So are pellets from the former Piney Wood Pellets facility in Wiggins, Miss., which Enviva acquired in October 2010 and expanded to 150,000 tons of capacity.

But the other end of that wood basket beckoned. In December 2010, Enviva announced another new location, at a former Georgia Pacific lumber mill in Ahoskie, N.C., in Hertford County hard by the Virginia state line in the northeastern part of the state. The new wood pellet manufacturing facility was slated to bring 53 jobs to the area, and would produce 330,000 tons of wood pellets annually from more than 600,000 tons of raw wood supplies. The new plant received grant support from the state's One North Carolina Fund.

"The region's abundant resources, proximity to ports, and wealth of skilled labor have made it a focus of Enviva's plans for future growth," Enviva said then. "Based on increasing demand from its domestic and European customer base, Enviva is contemplating the development of at least two additional manufacturing plants in the area, with site selection expected to be completed within 18 to 24 months."

Less than two months later, Enviva announced it had acquired a port terminal just an hour northeast of Ahoskie in Chesapeake, Va., from Giant Cement Co. The terminal will enable Enviva to create the capacity to receive, store and load in excess of 3 million tons of sustainably generated woody biomass for export each year.

"The Chesapeake region has for a long time been a key nexus of international trade in the United States," said Enviva CEO John Keppler."We are particularly excited to be one of the first green economy manufacturers to rebalance the flow of trade in favor of exports from this port in Virginia."

The terminal, located on a 50-acre (20-hectare) site, can accommodate a wide range of ships and loading options required for the export of more than 40,000 metric tons of Enviva's wood pellets per vessel. Elizabeth Woodworth, director of marketing and communications for Enviva, says the company is retrofitting an existing crane that was used by Giant. There is plenty of room for additional silos as volume increases. And the possibility exists that a second berth could be created on the opposite side of the terminal from the existing berth.

Immediate work on the terminal was expected to require up to 60 tradesmen and contractors, with a permanent staff of 12 expected to double by the third year of operation. The terminal upgrades are expected to be complete in November 2011, to coincide with pellet production in Ahoskie. Meanwhile, Giant will continue to use a portion of the terminal for cement sales.

"The port has handled our cement volumes for 11 years and has been an important asset for our company," said Duncan Gage, president and CEO of Giant. "It is one of the only assets of its type on the Eastern Seaboard, and we believe that Enviva is well-positioned to capitalize on the potential of this terminal and increase its importance to the region."

Even as Enviva continues its search for new pellet plant locations, however, it saw an opportunity where it was already barely planted. On May 2, 2011, in response to increased demand, it said it would increase production capacity in Ahoskie by another 50,000 metric tons, to 350,000 total metric tons. Total job creation is now expected to reach more than 60.

As part of that announcement, Enviva said it was "currently developing sites for two additional wood pellet manufacturing plants in the mid-Atlantic region, each of which could be operational by late 2012, and another site in either Mississippi or Alabama which could become operational in early 2013." The company has long operated one overseas plant as well, a 50,000-metric-ton combined-heat-and-power and wood pellet facility outside Brussels, Belgium.

Woodworth says proximity to both the wood and the deep water ports to ship pellets are the two prime factors in the company's site selection. But transport options between all those places are also important.

"Ideally we'd like to be on a major waterway like we are in Amory, on the Tenn-Tombigbee Waterway," she says, citing the low-cost and low-carbon advantages of using barges. "Our second favorite is by rail." The company plans to make prime use of a Norfolk Southern line serving that terminal in Chesapeake.

"In the next year we have planned to announce potentially three more sites in the North Carolina-Mississippi-Alabama region," she says. "And in 2012 the potential is for expanding even more."

So: How does harvesting wood for pellets differ from harvesting it for lumber as far as sustainability goes? Enviva says it's all about sustainably sourced raw material, based on a blend of adherence to worldwide sustainable forestry standards and developing close relationships with landowners. Enviva received SFI Fiber Sourcing certification in the first quarter of this year, and will pursue SFI, FSC and PEFC Chain of Custody certifications over the course of the remainder of 2011.

"Multiple studies by leading research institutes confirm that firing woody biomass is the most commercially attractive and effective way to reduce GHG emissions from fossil fuel-based power plants," says the company's document on procurement from the Southeast. "Studies by E4tech (UK) and other government-backed and private research bodies show that electricity produced from wood pellets harvested and manufactured in, and transported to Europe from, the Southeast United States reduces greenhouse gas emissions by at least 80 percent compared to electricity produced from coal.

In addition to the multiple certifications, says Woodworth, Enviva's site selection strategy itself makes sure transport distances for both raw materials and pellets are kept to a minimum. What's more, the company uses biomass to run its dryers. Finally, the company's headquarters is located in a LEED-Silver building in Bethesda.

"In terms of our carbon footprint, we measure that from forest to furnace," she says. "I can honestly say that sustainability is absolutely part of our DNA."