A Site Selection Web Exclusive, May 2011

The Toughest 10K Ever

Now that a tunneling machine has completed the race in just under five years,
Ontario will soon benefit from new, clean hydropower. 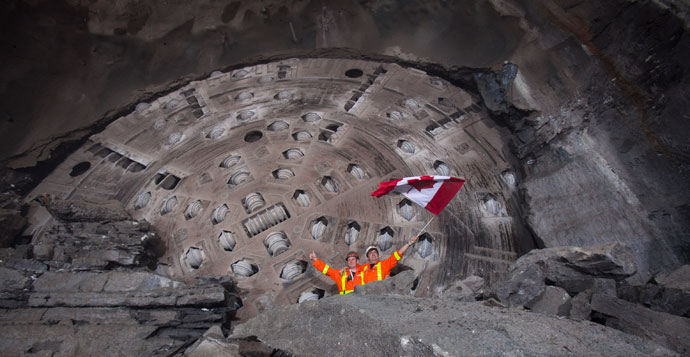 Workers celebrate the breakthrough of the world’s largest tunnel boring machine on May 13 in Niagara Falls, Ont.
All photos courtesy of Ontario Power Generation
by ADAM BRUNS
B 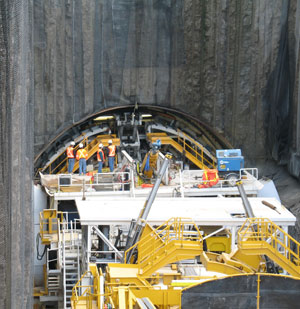 Only Big Becky's cutterhead had disappeared into the rock in this photo taken in September 2006, the month tunneling began.

reakthrough moments are a dime a dozen. Breakthroughs involving the world's largest tunnel boring machine and Niagara Falls will run you about $1 billion a pop.

On May 13, that 4,000-metric-ton machine broke through to daylight after a 6.3-mile (10.2-km.) journey beneath the City of Niagara Falls, Ont., to create a new C$1-billion tunnel for hydropower generation. When complete in 2013, the project will provide enough additional water to the Sir Adam Beck stations to generate an additional 200 MW of clean energy, or 1.6 billion kilowatt-hours annually for about 160,000 homes. From the falls that have helped provide power to the region for more than 100 years, the new tunnel is expected to supply its share for at least that long into the future.

"Today we witnessed the completion of one of the largest underground excavations in history," said Tom Mitchell, OPG's president and CEO. "It was accomplished by Big Becky, the largest hard rock boring machine in the world. Everyone in this province can take pride in this project. It's important we recognize the employees from OPG, Strabag, Hatch Mott MacDonald, subcontractors and the hundreds of men and women who went deep underground everyday to make this project a reality."

The project has employed more than 230 full-time construction workers. Unlike past tunnels that serve the Beck power stations, this tunnel was completed with no fatalities and no serious injuries. The project also featured nearly zero downtime, with the machine operating 20 hours a day every day. The annual exception is December 4, when, as OPG says, "the machinery is turned off and the workers walk into daylight to honor the feast day of Saint Barbara, the patron saint of tunnelers and miners."

"Niagara Falls is already the Green Energy Capital of Ontario. The development of this project has created over 6,000 person-years of great green jobs and high-end employment, and provided our economy with nearly a billion dollars of capital infusion. With the completion of this project we will have the safest supply of green energy anywhere," said Kim Craitor, MPP Niagara Falls.

The value of the design/build contract for the Niagara Tunnel Project is about C$1 billion. The total project — including such elements as remedial work at retired power stations; environmental assessments; and the hiring of an owner's rep during the project — is expected to cost about C$1.6 billion. The province is providing OPG with the financing for the project and the costs will be recovered through the regulated price for future electricity generation from the Beck generating stations.

As explained by OPG, since the Niagara River forms the international border dividing the two countries on the Niagara Peninsula south of Lake Ontario, a 1950 treaty between the United States and Canada formalized an agreement for sharing the river's water. A third of the water flow is guaranteed to flow over the falls. The balance is split between the two jurisdictions for the generation of hydroelectricity.

Currently, Niagara River water available to Canada for power generation exceeds the capability of the existing Sir Adam Beck power canal and diversion tunnels (about 1,800 cu. m. or 63,566 cu. ft. per second) approximately 65 percent of the time. With the tunnel, this will be reduced to about 15 percent of the time.

"The goal of the Treaty was to apportion water flowing from Lake Erie to Lake Ontario in a manner that balanced tourist requirements for scenic water with the water needed to operate the Canadian and U.S. power plants," explains OPG.

All in all, Big Becky was projected to dig up enough rock during this excavation to fill 100,000 dump trucks. Some of that rock was crushed to produce gravel for use on the project. As the tunnel has progressed, workers have applied a waterproof membrane and a final concrete liner. In all, about 400,000 cu. m. (14 million cu. ft.) of concrete will line the Niagara Tunnel.

But, as always with the falls, it's the volume of water that's really impressive: Gravity alone will propel the water through the tunnel at 500 cu. m. (17,660 cu. ft.) per second. "Think of it this way," says OPG. "That speed and volume of water would fill an Olympic-sized swimming pool in a matter of seconds."

Ontario is planning for 9,000 MW of hydro power by 2018, as it seeks to wean itself completely from coal-fired generation. Here are some quick facts:

There's more where this project came from: In 2010 Ontario announced the largest hydro project in Northern Ontario in 40 years — the Lower Mattagami Hydro Project. It will add 440 MW of clean electricity and create 800 construction jobs in northeastern Ontario. 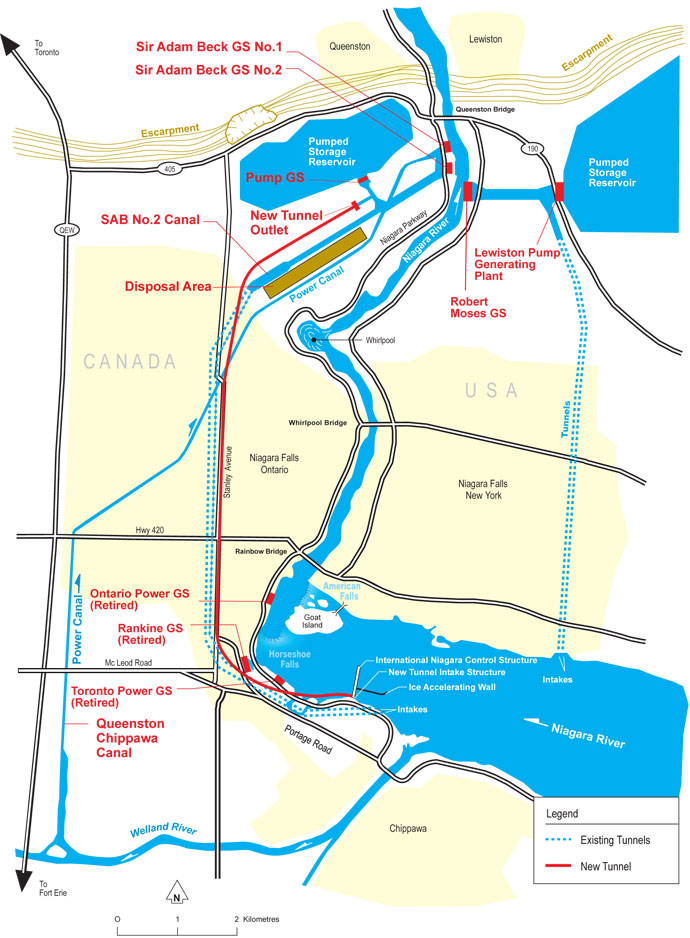 The above map depicts the layout of the entire hydropower system surrounding Niagara Falls,
including the path of the new tunnel.