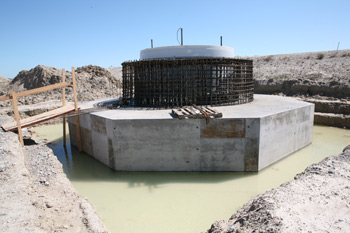 evolution Energy, LLC, in October began construction of its $20-million, six-turbine Harbor Wind wind energy farm on Port Corpus Christi property. It will be the first wind farm located on industrial port property in North America. On Oct. 31, Edison Mission Group (a subsidiary of Edison International), Midwest Wind Energy, LLC, and Nebraska Public Power District (NPPD) announced the $145-million, 50-turbine 80-MW Broken Bow Wind farm project, located in central Nebraska approximately three miles northeast of the city of Broken Bow in Custer County. Once completed, the wind farm will provide average annual tax revenues of nearly $900,000 over its 25-year life in property taxes and state income taxes, and will generate an average of $540,000 per year over its 25-year life in lease royalties to local landowners. And in Washington state, initial construction has started on the $170-million, 40-MW Palouse Wind Project between in Whitman County.

The new US$37-million Dalian National Laboratory for Clean Energy (DNL), based at the Dalian Institute of Chemical Physics (DICP) of the Chinese Academy of Sciences (CAS), will integrate research to explore clean energy and the efficient use of fossil fuels to meet China's sustainable energy development strategy. While the facility is China's first clean energy lab, the DICP's ongoing work includes many energy-focused projects.

The United Kingdom's Carbon Trust is chock full of insightful guidance, including its Expert in Energy series, a host of resources for businesses looking to reduce energy costs.

Renault on Nov. 14 inaugurated its €28-million (US$37.3-million) electric test center in Lardy, France. The 35,520-sq.-ft. (3,300-sq.-m.) facility houses 100 test benches, and helps support powerplant research behind the company's Kangoo Z.E. and Fluence Z.E. models, the first two of four new-generation electric vehicles that will be released over the next year. 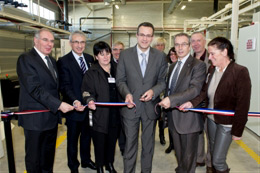 Inauguration of the electric test center in Lardy by K. Mikkiche (director of Ingenierie Department of tests and facilities /Groupe Renault) and officials including the vice prefect of Essonne and the Mayor of Lardy.
photo by Serge Charonnat courtesy of Renault 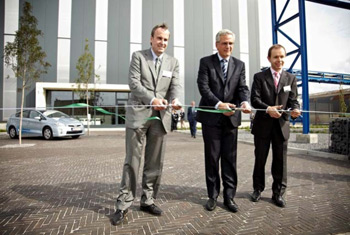 But what to do with those rechargeable batteries? Just to the north of France, in Hoboken, Belgium, Umicore in September inaugurated its new recycling facility for rechargeable batteries. The €25-million (US$33.3-million) facility will handle an initial annual capacity of 7,000 metric tons, equivalent to some 150,000 (hybrid) electric vehicle batteries or 250 million mobile phone batteries. "This market is anticipated to gain momentum," said a Umicore release, "driven by a combination of intensifying recycling legislation, a continuously growing portable electronics market and an increasing share of hybrid and electric vehicles on the roads."

How should economic development agencies adjust their strategy to win investment from this sector? Oxford Intelligence's upcoming study, "The Future of Renewable Energies 2012 - International Investment Strategies and Key Investors," promises to be "a critical update on the last study on this sector in 2008." Oxford says agencies ordering before December 31, 2011, have the opportunity to be a Key Partner in the study.

GCL-Poly Energy Holdings Ltd, profiled earlier this year in this space, said earlier this month that it plans to build the world's largest photovoltaic power station, at 1 gigawatt, in Datong, Shanxi Province, China. 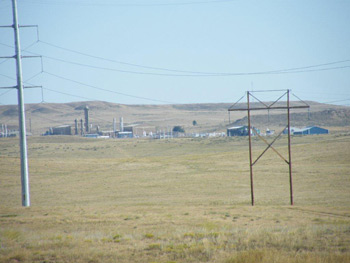 The Niobrara Energy Park is on the market as one project for a single buyer or joint venture.

The 640-acre (260-hectare) Niobrara Energy Park was approved in March 2011 by the Weld County Commissioners and the zoning plat was signed in August 2011, detailing more than 45 energy and data land uses. According to Craig Harrison, president of Harrison Resource, his company has conducted 21 feasibility studies on the project. "This region has $1.2 billion in economic activity, including power creation, data centers, natural gas plants and more," said Harrison. "The Fortune 100 companies investigating this project call it one of the largest 'utility-scale' MicroGrids on the planet, and Colorado Senator Mark Udall called it a 'private energy island.' "

Edison Electric Institute's "EEI Annual Property & Plant Capital Investment Survey," released on Nov. 10, revealed that transmission capital expenditures reached $10.2 billion in 2010, the first time the total has eclipsed $10 billion. "This represents a 9.4-percent increase from 2009 investment levels (in nominal dollars), as companies interconnect new sources of generation (including renewable resources) onto the grid, replace aging transmission lines, and develop new lines to ensure reliability and relieve congestion," said EEI. "Going forward, transmission investment is expected to increase significantly in 2011 and 2012, before flattening out in 2013 and 2014 as major transmission projects being developed over the next year or two are completed."

Shareholder-owned electric utilities and stand-alone transmission companies plan to invest a total of $54 billion (in 2010 dollars) on transmission construction projects between 2011 and 2014. This planned investment represents a 43-percent increase over actual transmission investment from the previous four-year period (2007-2010).

Saginaw Future, the Great Lakes Bay Region and the Michigan Economic Development Corp. celebrated the groundbreaking of the Great Lakes Solar Technology Park earlier this month. Local leaders and economic developers worked with the State of Michigan to develop the 231-acre (94-hectare) Solar Technology Park with parcels potentially available for no cost. The Park has the potential to locate up to six solar manufacturing facilities that would create hundreds of direct and indirect jobs, along with millions of dollars in new investment and new tax base. According to Saginaw News, one of those parcels is on offer to Norcross, Ga.-based solar panel maker Suniva, as part of a package designed to lure a $250-million, 500-job plant. Suniva recently withdrew a $141-million loan application to build on the site "after months of delays with the U.S. Department of Energy," reports the newspaper.

The New York Times looks at the divide between those out hunting for shale gas in Pennsylvania and those out hunting for game. A measure that would impose impact fees on drillers is poised for final action by the Commonwealth's General Assembly. Meanwhile, the Clearfield County Economic Development Corp. has launched a real-estate website specifically targeting the oil & gas industry: www.RigMonkeyApp.com. And the projects keep coming: Houston-based Valerus has opened a newly constructed aftermarket field application and repair services facility for oil and natural gas handling equipment in the Fayette Business Park in Smithfield, Pa., after being wooed by the Pittsburgh Regional Alliance (PRA) and the Fay-Penn Economic Development Council.

The December issue of Outside features a striking profile of renewable energy innovation by the U.S. military, led by the Marine Corps and taking place where the action is most intense. Coincidentally, earlier this month, PS&S Global, LLC was retained by ConEdison Solutions to explore new business opportunities within the Department of Defense's (DOD) Energy Savings Performance Contracting (ESPC) program.