Siemens’ new center for urban sustainability, The Crystal, is well on its way to reality in London’s Royal Victoria Docks.
Photos by VisMedia courtesy of Siemens
by ADAM BRUNS
T 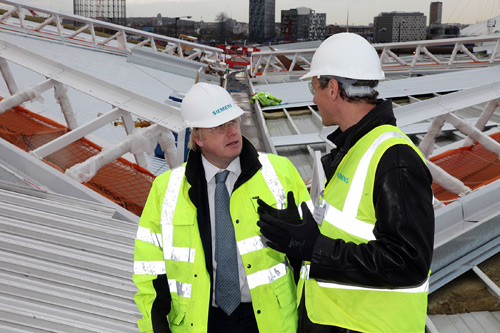 his autumn saw two projects spring into being that seek to turn the happy-future talk often bred by the Olympic Games into some tangible progress in the here and now.

On October 26, Siemens topped out "The Crystal," its new £30-million (US$47-million) center for urban sustainability in London's Royal Victoria Docks. The project is scheduled for completion in summer 2012, just in time for the London summer games.

"It will serve as a conference and research center, and host interactive exhibitions showcasing infrastructure solutions that promise a higher quality of life in city environments," said Siemens. "Located in the Royal Victoria Docks, the crystalline geometry of the 'The Crystal' and its reflecting facade will make the building a further highlight in London's city skyline. The use of green technology makes the building an outstanding example of energy-efficient construction: It will be powered completely by renewable energy and use rainwater harvesting. The building will feature outstanding energy efficiency in accordance with the stringent international LEED and BREEAM [Building Research Establishment Environmental Assessment Method] standards."

The Crystal will contain office space for over 100 desks for infrastructure experts, research partners, planners and academics from around the world. The building itself will be at the epicenter of the city's Green Enterprise District. "It will cover an area of just under 2,000 sq. m. [21,530 sq. ft.] in two dramatic, crystal-shaped sections," says Siemens. "The building will represent a new benchmark in sustainable design and construction excellence through intelligent integration of the building's structure, fabric and services and a series of coordinated active systems working together. Designed as an 'all electric' building, the Crystal will be able to operate free of fossil fuels."

"In the same way the wharves and warehouses of East London led the capital's global dominance of the industrial age, so I want this area to be economically vibrant in the 21st century," said Boris Johnson, mayor of London. "As part of this vision, we are working to attract the best new high-tech industries and environmental businesses to the capital bringing investment and jobs to Londoners. Siemens' Crystal is a perfect platform to help kick-start this regeneration demonstrating the type of dynamic partnership I want London to forge with global innovators in order to create the best big city in the world."

Siemens envisions architects, city planners, municipal authorities, school children, students and other visitors coming together with infrastructure and technology experts from Siemens and scientific institutions who are working on developing urban centers. The space "will showcase the city infrastructure of the future and show the possibilities for enhancing sustainability in mobility, building technologies, healthcare and in the supply of energy and water," said the company. "The competence center in London will act as the base from which Siemens technology experts will operate. These experts are also the principal contacts for global city development projects in Siemens Infrastructure & Cities Sector. The company plans to set up two further competence centers in Asia and the USA."

One of the most well known Londoners in the world, Sir Richard Branson, is behind the other Olympian effort. In this case, the Carbon War Room, an independent non-profit founded by Branson to harness "the power of entrepreneurs to unlock gigaton solutions to climate change" launched at the Winter Olympics in Vancouver, B.C., its Green Capital Global Challenge (GCGC), which aims to mobilize billions of dollars of currently idle private capital into city-led energy efficiency initiatives.

In September this year, the Carbon War Room announced the launch of the PACE Commercial Consortium (PCC), which integrates "the program management and engineering best practices of Lockheed Martin, the financial sophistication of Barclays Capital and the pioneering insurance partnership of Energi and HannoverRe in an end-to-end solution administered by the team's leader, Ygrene Energy Fund."

The announcement highlighted "an immediate potential market opportunity of $550 million in funding for the cities in Miami-Dade County, Fla., that join the Green Corridor PACE district for investment in commercial and industrial real estate. This funding can generate up to $1.8 billion in economic activity in Miami-Dade County, experts say. The Consortium sees the additional potential for an initial $100 million market in the city of Sacramento, Calif., which will stimulate an additional $530 million in economic activity."

"The PACE Commercial Consortium is the missing piece in the jigsaw puzzle for cities looking to implement green plans," said Branson.

"These investments are 100-percent private capital," said Brian McCarthy, CEO of Energi Insurance Services. "There is no government debt or cost involved. The markets can supply this financing because the economics are sound, engineering performance is insured, the security is strong and clean energy capital assets are profitable."

The Green Corridor group of cities, initiated by the Town of Cutler Bay in Miami-Dade and Sacramento, Calif., are the first municipalities to sign contracts with the Consortium's California-based PACE finance administrator, Ygrene Energy.

The U.S. Business Council for Sustainable Development, a U.S. industry partner, has organized its building owner members to retrofit their properties and operations, as PACE financing becomes available. "Corporate America can lead this huge jobs program with private capital, because clean energy is also profitable energy, once this financing structure is in place," said Andy Mangan, Director of the US BCSD.

"At Lockheed Martin, we believe that we have the ability and responsibility to address our Nation's energy and climate challenges," said Frank Armijo, vice president for energy solutions, Lockheed Martin Information Systems & Global Solutions — Civil. "By implementing these clean energy projects, we will reduce the energy consumption, carbon emissions and operating costs of the existing building stock, thereby increasing commercial property values for our customers."

Energi will provide Energy Savings Warranties (ESWs) to insure these savings guarantees, reducing the risk and lowering the cost often associated with such projects.

The Carbon War Room is now bringing this first mechanism, one of a series of corporate consortia, to the 30 cities currently participating in the Green Capital Global Challenge. 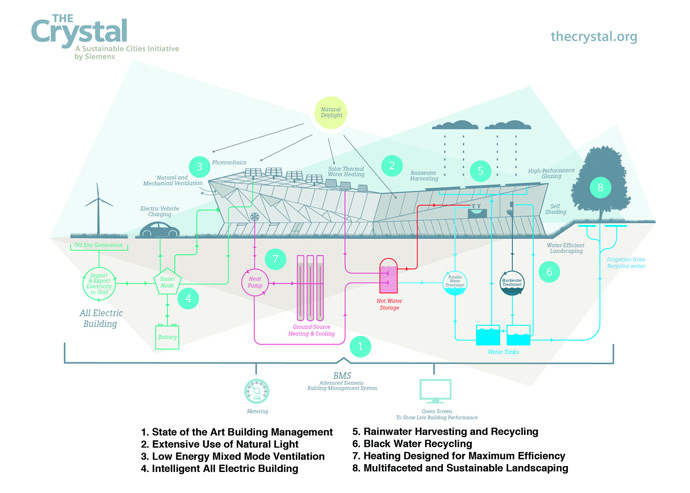