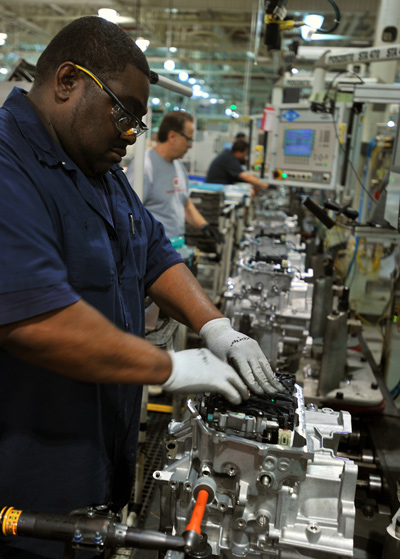 A glimpse of the latest in electric vehicle manufacturing and smart grid rollout plans, and where they might one day meet. 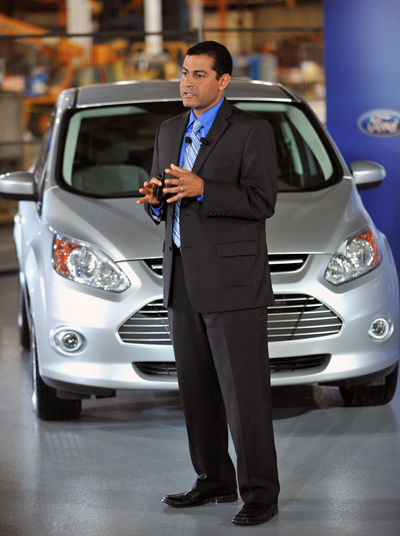 Sherif Marakby, director of Electric Vehicle Programs and Engineering, announces in June that Ford is adding more than 220 green technology jobs, including 50 new engineers, as it grows its Center for Excellence in Electrification in southeast Michigan.
Photo by: Sam VarnHagen/Ford Motor Co. (06/09/2011)

arly this month Ford Motor Co., as part of an aggressive electrification strategy that includes the launch of five electrified vehicles in North America by 2012 and Europe by 2013, named its "20 Cool Places to Charge in the U.S." They include such varied locations as M&T Bank Stadium, where the NFL's Baltimore Ravens play, situated just down the road from the GM White Marsh plant that's been retooled to make electric motors and hybrid components. The zoo in Greenville, S.C., was also featured, not far from where Korea's CT&T is going to make electric vehicles in Spartanburg County. Oak Ridge National Lab in Tennessee actually offers a solar-power charging station, in the same state where Nissan is rolling out its Leaf electric car and its new electric vehicle battery plant in Smyrna, near Nashville. And nearly a third of the 20 locations were in California, including Fisherman's Wharf in San Francisco, not far from the Tesla/Toyota electric car tie-up at the former NUMMI plant in Fremont.

In other words, the field is wide open in the still-nascent EV landscape, and the players are making their plays.

Ford itself launched the Transit Connect Electric small commercial van in 2010, will launch Focus Electric later this year and will introduce C-MAX Hybrid, a second next-generation lithium-ion battery hybrid and C-MAX Energi plug-in hybrid in 2012. In June the company said it would triple production capacity of electrified vehicles in North America by 2013, adding 170 jobs at its Rawsonville plant in Ypsilanti, Mich., and Van Dyke Transmission plant in Sterling Heights, Mich., on top of the more than 50 new electrified-vehicle engineers who have come on board in Dearborn in the past year. Production of the two C-MAX vehicles will begin at Michigan Assembly Plant in 2012, with locally sourced battery packs and electric drive transaxles. The plant in Wayne is the world's first to produce gasoline-powered vehicles, full-electric vehicles, hybrid and plug-in hybrids under one roof.

Today, Ford sells approximately 35,000 electrified vehicles a year, but hopes to grow EV production capacity to more than 100,000 by 2013. By coincidence, more than 100,000 of the C-MAX five-passenger vehicles have been sold since its launch in late 2010 in Europe, where sales of the new model have picked up substantially, says Ford, leading to production expansion activity at its plant in Valencia, Spain. 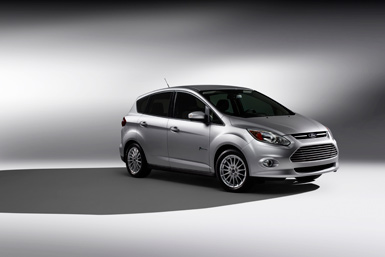 The C-MAX Hybrid is a next-generation full hybrid version of the five-passenger multi-activity vehicle and is targeted to deliver better fuel economy than Ford Fusion Hybrid, the most fuel-efficient sedan in America. It also leverages the company's powersplit hybrid architecture and uses a lighter, smaller lithium-ion battery system. 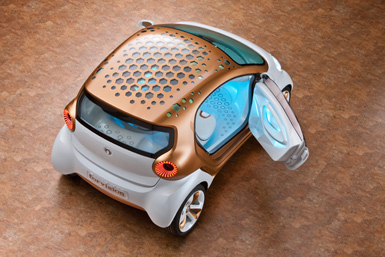 Combined with energy-saving organic light-emitting diodes (OLEDs), the smart forvision's roof, which is covered in solar cells, is not just environmentally friendly, but a design highlight.
Photo courtesy of Daimler

Elsewhere in Europe, Daimler and other carmakers continue to pick up their own activity, while also breaking the mold with ever more futuristic concepts. Daimler says it is the first car manufacturer to have released four electric production models, including its smart fortwo EV. At the recent 2011 International Motor Show in Frankfurt, Daimler and BASF introduced a new concept vehicle called the smart forvision, developed with a special emphasis on energy efficiency, temperature management and lightweight design. Amazingly, it is the first time the two German companies have joined forces on a project.

"In this joint project with Daimler we have successfully developed a holistic approach to urban mobility of the future," said Dr. Andreas Kreimeyer, member of the Board of Executive Directors and Research Executive Director of BASF SE.

"The smart forvision is an impressive example of what can be achieved when two leading companies from two very different sectors sit down together," said Dr. Thomas Weber, Daimler AG board member responsible for Group Research and Development at Mercedes-Benz Cars. "It was exciting to see how our developers and designers worked with the researchers at BASF and came up with a joint vehicle concept that provides a meaningful insight into the future of electric mobility."

Among its features: Transparent organic solar cells, transparent organic light-emitting diodes, all-plastic wheels, new lightweight body components and infrared-reflective films and coatings. The amount of energy needed to heat up or cool down the vehicle's interior can be reduced with the help of a comprehensive temperature management system that uses innovative materials such as polymer films in the windows to reflect thermal radiation, and high-performance insulating materials. "All help to reduce the vehicle's energy consumption and so increase its range and practicality," said the companies.


Where Smart Will Reign

EV connectivity is a showcased element, of course, in a number of areas' pilot projects in smart grid implementation, be it Boulder, Vancouver, Ontario, the Research Triangle or Korea. And both companies and communities already are on the lookout for next frontiers. A consortium of Japanese electronics firms is moving forward with a project in New Mexico in partnership with the state and Los Alamos and Sandia national labs. And Korea's government, as part of a national focus on green technology and environmental awareness, has pursued a smart grid partnership with the state of Illinois whereby the Korea Electrotechnology Research Institute is working with Argonne National Laboratory and the University of Chicago to test and develop technologies. Korea is also pursuing a $65-million smart grid "test bed" project on Jeju Island, where the schematic features an EV charging station at the island's center.

Ultimately, though, what all EV champions want is to not be on an island.

At a Discovery 2011 Forum session entitled "Is Ontario Ready For Plug-In Electric Vehicles?" earlier this year in Toronto, Sandy Di Felice, director of external affairs for Toyota Canada, said hybrids are at the core of technology development at Toyota, which has sold 3 million hybrids around the world. The company is in the midst of a plug-in hybrid trial in key markets across Canada, and is primarily sticking with mirroring a hybrid powertrain with an electric powertrain in order to address drivers' range anxiety concerns. But the company's eyes are always open.

"For Toyota our goal of sustainable mobility can be achieved with several different technologies being pursued concurrently," said Di Felice. "We fundamentally believe it's about the right vehicle at the right time in the right place."

The next chapter? Toyota hopes to bring fuel cell cars to market in 2015.

"Overcoming range anxiety is a particular point we looked at when we designed the Chevrolet Volt," said Phil Petsinis, manager of government relations for GM Canada, noting a propulsion strategy that has limited pure-electric-power capabilities.

As for charging up, "There is no time during the day when it's more expensive to use electricity than it is to visit your local gas station," said Tom Odell, manager, electric vehicles, for Toronto Hydro, one of the largest local electric power distribution companies in Ontario. He said EV infrastructure management is integrated into the asset management division of Toronty Hydro's system reliability planning. He said the utility was prepared last year for the introduction of EVs, anticipating penetration as high as 10 percent. But the need for empirical information about where EV use is clustered drove the company in late 2010 to deploy 4,000 transformer smart meters across Toronto.

"We're not deploying a smart grid just for EVs," he said, "but EVs are a part of the smart grid. We're working with other OEMs to be prepared for the EVs as soon as they're available in Canada. We're also engaging the regulatory and policy makers. We need to streamline the installation process, and make it just an extension of the vehicle purchase process."

"The U.S. provides incentives of 50 percent of the cost of [home charging station] installation," he said, up to $2,000. "Quebec will provide 50 percent up to $1,000. Ontario could do something very similar. B.C. has been leading in the area of building codes and home and public charging facilities."

"The City of Vancouver was a leading municipality in getting prepared for electric vehicles," said Alec Tsang, senior technology strategist for BC Hydro. He said charging infrastructure guidelines for home and workplace were developed in 2009 in B.C., and building code revisions are in progress. Condos also are being retrofitted with charging infrastructure.

Tsang said there is a lot of concern about capacity to serve the EV load, and that there is not a business model in terms of fee-for-service for charging infrastructure.

That said, "We wouldn't have brought the Volt to market if there were crucial barriers," said GM's Petsinis, noting unfolding technology developments such as a charger that would shorten EV charge times to just 3-4 hours. "The grid impact of EVs over the next few years is minuscule. The Volt consumes 2,500 kilowatt-hours a year, similar to an AC unit. It's not insurmountable."

Petsinis also said building code changes friendly to home charging are a must. That need was borne out in the results released earlier this month by the Electric Power Research Institute (EPRI) after surveying people in the service territories of the Tennessee Valley Authority (TVA) and Southern Company in the southeastern U.S. More than 50 percent of respondents would prefer to charge their EVs at home.

"These surveys help in developing preliminary forecasts for electric vehicle adoption and identify the corresponding infrastructure and charging needs," said Mark McGranaghan, vice president of Power Delivery and Utilization at EPRI. "As we survey people in different regions of the country, we see different perceptions about electric vehicle technology. This will help utilities in developing their specific plans to meet the needs of their customers."

EPRI asked survey respondents what factors influenced their likelihood to go electric with their car purchase. "Survey results point to the availability of multiple locations to charge, and the availability of fast charging technology. Results also show that consumers may be hesitant to pay for faster charging, with more than 50 percent in both surveys unwilling to pay $500 to install an optional 220V upgrade system in their home for fast-charging electric vehicles."

Here are links to the EPRI surveys, as well as a consumer guide to EVs: