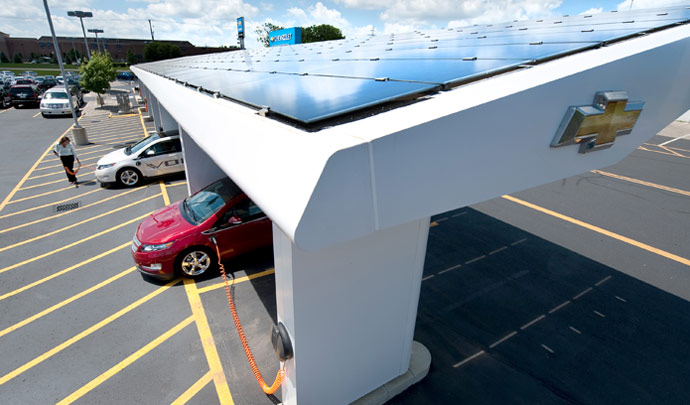 As part of its announcement of a $7.5-million investment in Sunlogics, GM also signed commercial agreements with Sunlogics for the installation of solar charging canopies at Chevrolet dealerships and GM facilities, such as this one at Al Serra Auto Plaza in Grand Blanc, Mich.
Photo by Steve Fecht for General Motors Ventures
by ADAM BRUNS
I 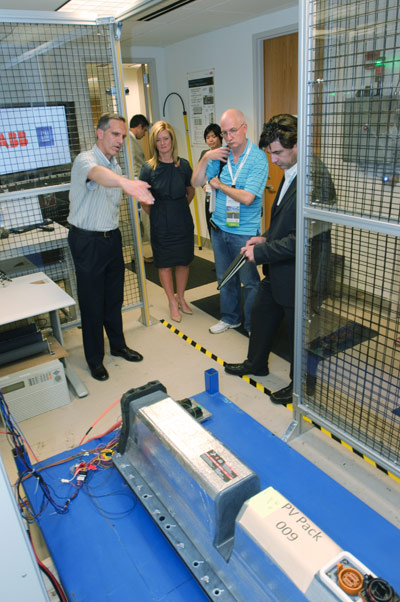 Pablo Valencia, GM's Senior Manager for Battery Lifecycle Management, describes the prototype developed by GM and ABB to prepare the battery system used in the Chevrolet Volt for potential secondary use applications to journalists who visited the ABB R&D office in Raleigh, N.C.
Photo courtesy of GM

In late July, General Motors Ventures LLC announced an equity investment of $7.5 million in Sunlogics PLC, a vertically integrated global solar energy systems provider specializing in solar project development and installation. The investment will create 310 jobs, as the company uses some of the funding to establish its corporate headquarters and open a manufacturing facility in suburban Detroit, and to set up a manufacturing facility in Ontario. The facility in Southeast Michigan will create 200 jobs and the Canadian facility will support 110 jobs.

GM also signed commercial agreements with Sunlogics for the installation of solar charging canopies at Chevrolet dealerships and GM facilities, as well as a power purchase agreement to install large-scale solar arrays at GM facilities and purchase the energy they produce.

"Global solar energy use is predicted to more than double by 2016, so we believe that investing in renewable energy is a smart and strategic business decision," said Jon Lauckner, president of GM Ventures. "And the Chevrolet solar charging canopy project complements our electrification strategy that started with the Chevrolet Volt by helping our cars live up to their fullest green potential."

As part of the announcement, General Motors committed to double its solar energy output globally by the end of 2015.

"Our GM facilities currently house 30 megawatts of solar power, and we are committing today to double that capacity to 60 megawatts over the next few years, which is equivalent to powering 10,000 homes annually," said Mike Robinson, GM vice president of Energy, Environment & Safety Policy.

GM has three of the largest automotive rooftop solar power installations in the United States and the world's largest rooftop solar installation at its car assembly plant in Zaragoza, Spain. Additionally, GM has started construction on a new solar field at its Detroit-Hamtramck facility and completed construction on a solar array on top of its Baltimore Operations facility.

"The partnership provides a new level of opportunity to the larger scale industrial solar projects Sunlogics designs, manufactures and constructs."

When the Volts Lose Their Jolt

Around the same time, in Raleigh, N.C., GM and ABB demonstrated the beginning stage of a solution to a nagging electric vehicle question: What will happen to electric vehicle battery systems at the end of their useful lives in the vehicles?

Earlier this year, the two companies signed an agreement to identify joint R&D projects that would reuse Chevrolet Volt battery systems, which will have up to 70 percent of life remaining after their automotive use is exhausted. Recent research conducted by GM predicts that secondary use of 33 Volt batteries will have enough storage capacity to power up to 50 homes for about four hours during a power outage.

In Raleigh, GM and ABB demonstrated an energy storage system that combines a proven electric vehicle battery technology and a proven grid-tied electric power inverter. The two companies are building a prototype that could lead to Volt battery packs storing energy, including renewable wind and solar energy, and feeding it back to the grid. The system could store electricity from the grid during times of low usage to be used during periods of peak demand, saving customers and utilities money. The battery packs could also be used as back-up power sources during outages and brownouts.

"As we grow our battery systems expertise, we need to assure we're optimizing the development of our battery systems with secondary use in mind from the start," said Micky Bly, GM executive director – Global Electrical Systems, Electrification and Infotainment.

Using Volt battery cells, the ABB and GM team is building a prototype system for 25-kilowatt/50-kWh applications, about the same power consumption of five U.S. homes or small retail and industrial facilities. ABB has determined its existing power quality filter (PQF) inverter can be used to charge and discharge the Volt battery pack to take full advantage of the system and enable utilities to reduce the cost of peak load conditions. The system can also reduce utilities' needs for power control, protection and additional monitoring equipment.

A separate smart grid-oriented project was also launched in Raleigh that week, as GM and Onstar announced they would soon launch the first real-world pilot of smart grid solutions for electric vehicles. Starting in the third quarter, hundreds of employees of regional utilities will drive leased Chevrolet Volts as their everyday vehicles and participate in the pilot. Partners include Progress Energy, Duke Energy and the Electric Power Research Institute, which announced the project during the Plug-In 2011 conference held this summer in Raleigh.

Through the OnStar Advanced Telematics Operations Management System (ATOMS), a utility will be able to accurately monitor and manage the energy used by the vehicles. The data will give the utility deep insight into where and when EVs are charged and demand response, which allows the utility to reduce peak demand by shifting EV charging to non-peak hours.

"Through this pilot we will see real-time results on how intelligent energy management can maximize EV charging efficiency and minimize the electric bill for EV drivers," said Nick Pudar, OnStar vice president of planning and business development. "OnStar is the only telematics provider that can create a wireless bridge between electric vehicles and the grid, building on our learning from the Chevrolet Volts on the road today."

GM must like the Carolinas. Also among its promises this summer was a $6-million investment by General Motors Ventures in Proterra, the Greenville, S.C.-based manufacturer of zero-emission commercial transit buses.

GM Ventures is part of an investment group led by venture capital firm Kleiner Perkins Caufield & Byers that will invest a total of $30 million in the bus manufacturer.

Proterra's EcoRide™ BE-35 battery electric bus is averaging up to 24 mpg (diesel equivalent) in service, a more than 600-percent improvement over a typical diesel bus. Using technology developed by Proterra, the lightweight, composite-body bus recharges in about 10 minutes.

Three EcoRide BE-35 buses are currently in a test fleet near Pomona, Calif., with additional buses to be added, and new buses and charging stations are also headed to San Antonio, Texas, and Tallahassee, Fla., later this year. This investment allows Proterra to complete federal validation testing of its bus, roll out additional pilot fleets and complete initiatives to significantly reduce costs and increase volume production at its Greenville manufacturing plant, which will have the capacity to produce 400 buses annually. 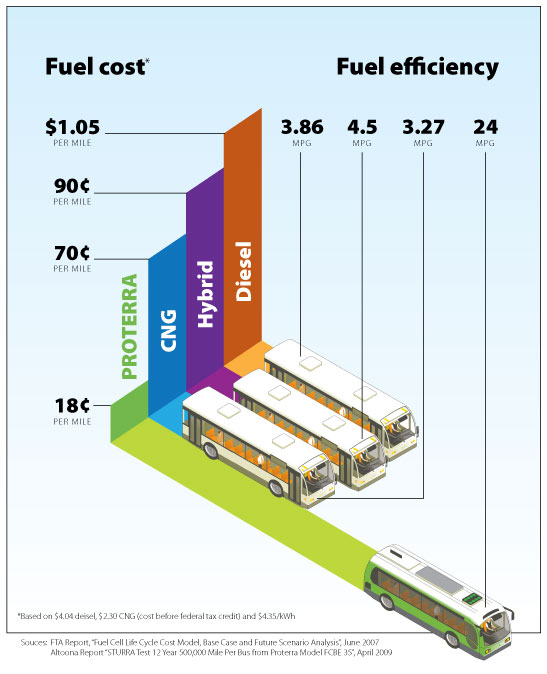 This graphic makes clear why investors such as GM and Kleiner Perkins think Proterra’s a good bet.
Graph courtesy of GM