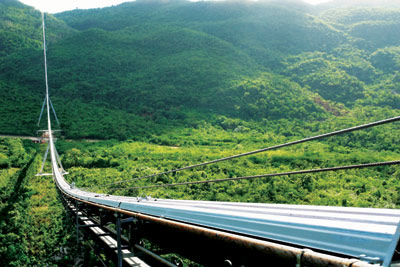 lcoa Jamalco Operations in Jamaica announced earlier this month that a 2.1-mile (3.4-km.) RopeCon® rope conveyor system (pictured) had hauled 10 million tons of bauxite from the Mount Oliphant mine to a rail station in less than two years. The bauxite is then shipped to the company's Clarendon refinery. As remarkable as the volume transported over mountainous terrain is the power generated by the conveyor itself, which generates approximately 1,200 kilowatts of braking energy per hour. Since the system went into operation in 2007, it has saved Alcoa approximately $1.5 million in energy costs. Moreover, said Jerome Maxwell, managing director of Jamalco, "Switching to the RopeCon system saves 1,200 truck journeys a day along with the associated emissions of CO2, noise, and fine dust."

Google takes its data centers seriously, as evidenced by the Web resources it makes available for others to benefit from. While the company has made the news because of its giant server farms, it also pays attention to the type of smaller networking rooms, or points of presence (POPs) that many companies operate. This 10-page case study explains how it achieved yearly energy cost savings of $67,000 from investing $25,000, with four simple steps that achieved their ROI within in well under one year. 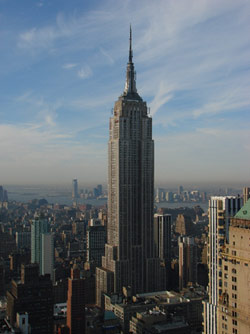 The Empire State Building on Sept. 13 was awarded LEED Gold for Existing Buildings certification as further recognition for the $550-million Empire State ReBuilding program. The announcement was made jointly by Anthony Malkin, Empire State Building Company; Dana Robbins Schneider, vice president of Jones Lang LaSalle, program manager of the energy retrofit, LEED feasibility assessment and application process; and Rick Fedrizzi, president, CEO and founding chair of USGBC. The LEED Gold certification follows the ground-breaking creation and implementation of a new replicable, transparent, quantifiable process for economically justified energy efficient retrofits in the existing built environment created by a team of the Clinton Climate Initiative, Johnson Controls, Jones Lang LaSalle and the Rocky Mountain Institute. "The game-changing analytical model is non-proprietary and open-source and is being replicated at other properties around the world," said a news release from JLL. "The retrofit conducted by Johnson Controls and Jones Lang LaSalle is guaranteed to reduce the building's energy consumption by more than 38 percent and should save $4.4 million in energy costs annually, representing an approximate three-year payback of the cost of implementation."

A white paper from Capital Review Group titled "Energy efficiency and claiming the §179D deduction as far back as 1/1/2006 without amending any tax returns" covers tax deductions for heating, cooling, water heating, and interior lighting energy cost of new or existing commercial buildings. "This energy-efficient commercial building property must be placed into service between January 1, 2006 and December 31, 2013," says the paper. "The §179D tax deduction was designed by Congress to incentivize the utilization of energy-efficiency components in a building to one of the following parties:

The tax deduction is up to $1.80 per square foot for improving the energy efficiency of existing commercial buildings or designing high efficiency into new buildings. These tax incentives are substantial for reducing taxes of improvements or new builds."

Earlier this month, the Port of Duluth in Minnesota welcomed the BBC Jade (pictured), which discharged nearly 4,000 tons of wind turbine components it had transported from Denmark, and which were headed for Minnesota Power's Bison 1 Wind Energy Center near Salem, N.D. The cargo has fast become an important category for the port. "Earlier this summer, the Port of Duluth passed the one million mark in number of freight tons of wind components handled to date," said Adolph Ojard, executive director of the Duluth Seaway Port Authority. "Through the years, we've developed long-standing relationships with manufacturers and suppliers in Europe and North America," added Ojard. "And our terminal operator – Lake Superior Warehousing Company – has earned a stellar reputation for handling dimensional cargoes; we were just ranked the top port in North America for overall service by the Railway Industrial Clearance Association (RICA)." "As one of the world's largest wind turbine providers, efficient transportation is critical to our operations," said Sally Chope, transportation & logistics manager for Siemens Energy's wind power business. "The Port of Duluth offers us convenience, easy clearance for our shipments and Lake Superior Warehousing provides excellent handling of our cargo. 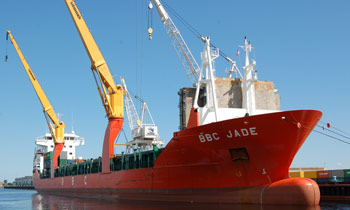 Photo courtesy of Port of Duluth

Siemens Canada in July launched Plantville™, a new online gaming platform where players are faced with the challenge of maintaining the operation of their virtual plant while trying to improve key areas of manufacturing. The game, which allows the player to make vitamins, bottles or trains, enables the plant manager to improve the productivity of their facilities by learning how to effectively integrate industrial and infrastructure products and solutions. Gamers are measured on a number of Key Performance Indicators (KPIs), including safety, on time delivery, quality, energy management and employee satisfaction. "With Plantville, Siemens is targeting the next generation of plant managers with a realistic simulation to understand what enhances productivity," said Robert Hardt, senior vice president of the Industry Sector for Siemens Canada. "This platform is entertaining and engaging. Players are able to utilize their skills to improve the performance of a manufacturing facility and turn it into a benchmark for the industry." 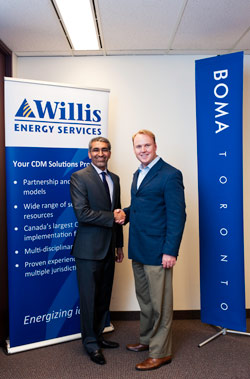 Earlier this month SolarWorld established a new joint venture, SolarCycle, for the production of metal products and other valuable materials that are made from recycled solar modules. Partners include the Preiss-Daimler Chemical Park, and headquarters of the company will be located in the Bitterfeld/Wolfen Chemical Park in Saxony-Anhalt. At the Bitterfeld/Wolfen location the construction of the new, €12.7-million (US$17.3-million) largely automated plant will begin in the fall of this year, said a SolarWorld release.

A webinar on "Myths and Realities of Shale Oil and Gas" will be conducted by Ed Bee and Charlotte Batson of Taimerica Management Co. on Tuesday, Sept. 27. Topics include revenue; infrastructure; hydraulic fracturing; earthquakes; jobs and training; community impact and more. 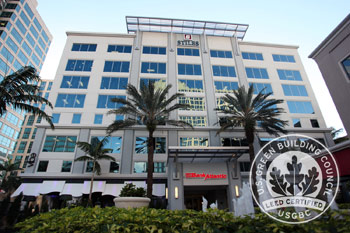 In late August, Stiles' headquarters building in Fort Lauderdale, Plaza at Las Olas (PALO, pictured), earned LEED certification for sustainability enhancements including computer-operated energy management system, electricity-reducing technologies, water-conserving plumbing fixtures, and low VOC-emitting paints and sealants. "Stiles' first Commercial Interior certification, PALO has been through four transformations since its original construction in 1940s," said a release from the commercial real estate firm. "The project tops Stiles' extraordinary roster of 16 South Florida LEED projects, 11 of which it has either developed, constructed or both, and the rest of which it has provided consulting services to help clients achieve project certification." The company decided several years ago to reform the foundation of its operating procedures with a series of sustainable practices, and was the developer of the first LEED-NC spec office building in Broward County.