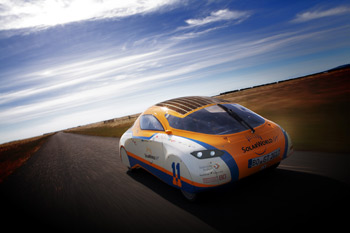 circumnavigation of the world propelled only by the power of the sun is the mission of the SolarWorld GT. Having crossed 11,660 km. (nearly 7,250 miles) in Australia, New Zealand and the United States since October, the vehicle now heads to Europe. Between April 30 and May 10, the GT will travel more than 1,400 km. (870 miles) through Italy, from Cosenza in the south via Naples, Rome, Pisa to Genoa, and then on to Monaco. Russia, Kazakhstan and China are still ahead of the team before it will end its journey back in Australia in December 2012.

The solar racer built by SolarWorld AG and the Bochum (Germany) University of Applied Sciences was designed to attract interest to solar energy with its trip around the world. "The SolarWorld GT is an ambassador for solar power and solar mobility. It runs completely without fuel and externally provided electricity," explains Dr.-Ing. E. h. Frank Asbeck, Chairman and CEO of SolarWorld AG. "In the future, millions of vehicles will be electrically operated. They will not all have their own on-board power plant like the SolarWorld GT, but they can be recharged with a SunCarport or with the solar power plant on your own roof." 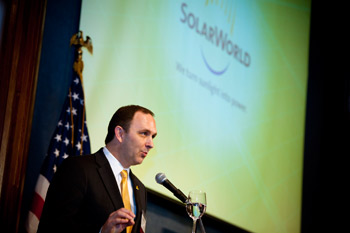 Speaking on March 27 at the Conference for the Renaissance of American Manufacturing at the National Press Club in Washington, Gordon Brinser (pictured), president of SolarWorld Industries America Inc., said the company's "Asia strategy" was counter to the usual corporate answer, and involved aligning its 1,100 U.S. workers, innovation pipeline and advanced automation methods "to compete with producers from Asia and everywhere in the world. Moreover, we expect Asian exporters to play by the rules of well-established trade law, and when they don't, we demand that they be held accountable."

Watch for John McCurry's exploration of this trade tiff in the May issue of Site Selection.

Thanks in part to The Solyndra Effect, you can put a coda (or at least a great big hold) on Coda's plans to employ up to 2,000 at an electric vehicle and battery complex in Ohio. Crain's Automotive News delivers the scoop. Where will they do the work instead? China.

Meanwhile, on April 23, DENZA Shenzhen BYD Daimler New Technology Co. (BDNT) unveiled its new all-electric vehicle show car at Auto China 2012 in Beijing. The battery-driven vehicle that "defines a new level of sophistication in the Chinese New Energy Vehicle (NEV) segment" is the result of the partnership between BYD and Daimler. "Over 200 engineers and experts from both companies have gathered and combined their strengths at BDNT's base in Shenzhen," said a news release from Daimler. "China is the home of DENZA because of its potential as an NEV market. With its expanding middle class, increasing urbanization, open-minded consumers and a supportive government determined to reduce their reliance on crude oil, central government expects the number of NEVs in China to rise from its current level of 10,000 to 5,000,000 by 2020 according to the latest NEV industrialization plan. With the launch of its new concept car, and a production model slated for release in 2013, DENZA is 'on track.' " 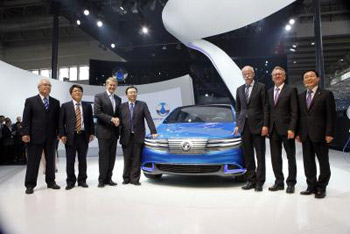 Next month's 2012 KPMG Global Energy Conference has a lot of top-shelf subject matter to dig into. 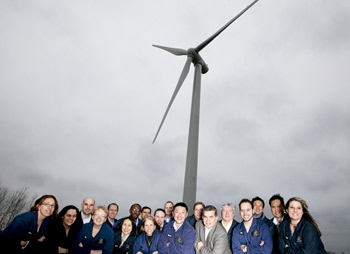 The company's wind project is expected to meet nearly 60 percent of the Geneva plant's power needs. To achieve the plant's goal of using 100-percent renewable energy for its electrical needs, Zotos recently entered into an agreement to purchase up to 9 million kWh of green energy. The 2009 federal stimulus bill covered 30 percent of the wind project's costs.

President Obama earlier this month issued an Executive Order coordinating natural gas activities through an inter-agency working group, prompting National Association of Manufacturers President and CEO Jay Timmons to say, "We welcome a 'one stop shop' for research and information to promote the development of this badly needed resource and are pleased that there will be discussion and input on regulatory policy across agencies. Manufacturers also appreciate that the Executive Order recognizes that the states, who know the shale gas issue best, are the primary regulators of these policies."

A related set of resources from the U.S. Geological Survey explores the possible influence of fracking in answering the question "Is the recent increase in felt earthquakes in the central U.S. natural or manmade?"

Ah, but the spreading fissures of the fracking story don't end there. For the latest on frack PACs, see the links in the Columbia Journalism Review's summary of energy money and influence in Ohio.

If you read Site Selection, you may already be familiar with Toronto's MaRS Discovery District, whose expertise and facility footprint just keep expanding with every passing year. Among the organization's bevy of useful research is a recent report on "Startups and the Smart Grid." Look for more from our recent tour of Ontario smart grid technologies in upcoming Site Selection reports. 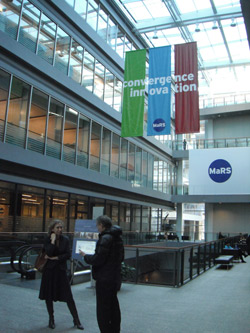 The MaRS Discovery District in Toronto is a hive of idea encouragement, relentless due diligence and entrepreneurial thinking.