omEd earlier this month launched a new Data Center Energy Efficiency program that includes per-kWh financial incentives and technical assistance. The program is part of ComEd's Smart Ideas for Your Business program. According to ComEd, two of its dedicated account managers who are specialists in the sector currently serve as energy liaisons to more than 60 data centers in northern Illinois. "The combination of a skilled work force, a strong fiber-optic infrastructure, a large peering network among fiber-optic providers and high financial and enterprise server demand from a large base of Fortune 500 companies and financial businesses, including 28 located in the metropolitan area, have contributed to the Chicago area's popularity as a location for data centers," said the utility.

The new 190,000-sq.-ft. (17,651-sq.-m.) corporate headquarters of Forrester Research in Cambridge, Mass., designed by Margulies Perruzzi Architects (MPA), last week earned LEED-Platinum for Commercial Interiors certification. Forrester moved into the building in August 2011. Among the features of the complex which helped the project earn the high distinction are an "urban wild" landscape; the selection of a LEED-Gold base building to start with; 35-percent reductions in both water use and lighting power; and the purchase of green power. "MPA has created a collaborative and flexible workspace that offers sustainability and a healthy working environment," said Jean Baranowski, vice president of corporate services at Forrester Research.

Evidence of spinoff economic activity from the energy sector is alive and well in Houston, where earlier this week Brennan Investment Group and DLJ Real Estate Capital Partners announced acquisition of a nine-building industrial portfolio totaling 338,577 sq. ft. (31,454 sq. m.). "Houston's emergence from a regional oil and gas driven economy to a global provider of energy services, including engineering, exploration, manufacturing, and finance has transformed the Houston economy into a robust and diverse metropolitan marketplace," said Michael Brennan, Chairman and Co-Founder of Brennan Investment Group. "The benefits to the industrial real estate market are manifested in 11 consecutive quarters of positive absorption and a 94.4-percent occupancy rate."

In the state next door last week, Halliburton dedicated its new $65-million, 160-job completion tools manufacturing facility in Lafayette, La. "With Lafayette's strong workforce and economy, access to major transportation zones, and the LED FastStart program that helped to hire and train our employees, this is a good place to grow our business," said Halliburton's Marc Edwards, senior vice president of the company's Completion and Production Division.

The 2012 Johnson Controls Energy Efficiency Indicator, a global survey of 3,500 building owners and operators that was released in June, said that nearly a third of respondents indicated tax credits, incentives and rebates have the greatest impact on increasing investment in energy efficiency. "That figure jumps to 42 percent in the U.S.," said the company, owing to the fact that nearly 75 percent of commercial buildings are more than 20 years old and ready for energy improvements. But the leaders are in Asia: Eighty-one percent of respondents in China and 74 percent in India plan to increase investments in energy efficiency or renewable energy.

For a comprehensive report of the 2012 Energy Efficiency Indicator, click here. A report on related matters was released earlier this week, when the Center for American Progress released "The Networked Energy Web: The Convergence of Energy Efficiency, Smart Grid, and Distributed Power Generation as the Next Frontier of the ICT Revolution."

Did you know there is an organization called the U.S. Industrial Pellet Association? And did you know they applaud a recent decision by the U.K. Dept. of Energy and Climate Change? Find out why here.

In late June Enercon Canada, a division of the German firm, opened a new 50-job wind turbine electronics manufacturing facility at Beamsville in the town of Lincoln, Ont., part of the Niagara region. The 38,000-sq.-ft. (3,530-sq.-m.) facility will produce up to 60 different types of electrical cabinetry for use in Enercon's wind turbines and growing solar base. "Enercon's investment in the Niagara economy proves that the Green Energy Act is successful in creating jobs and moving towards a more sustainable and prosperous tomorrow," said Kim Craitor, MPP for Niagara Falls, referring to the provincial law passed a few years ago. "I'm proud that the Ontario government has stayed the course so that we can reap the rewards today and for future generations."

The U.S. EPA's new Cross-State Air Pollution Rule (CSAPR) and Mercury and Air Toxics Standards (MATS) rule could drive up the cost of power plant retrofits by 25 percent or more, but a new study from Duke University says it's a good thing North Carolina took pre-emptive policy action in 2002. "North Carolina's efforts to retrofit ahead of these rules may have saved the state roughly $600 million in capital compliance costs, as other states rush to install these technologies in a shorter window," said David Hoppock, lead author and research analyst at Duke's Nicholas Institute for Environmental Policy Solutions.

During a recent visit by Site Selection to the village of Aubel, Belgium, Bernard Meurens (pictured), sales manager of La Siroperie Meurens, maker of a unique fruit spread found in most Belgian pantries, showed off the 100-plus-year-old facility's green roof. He said it's helped the company reduce its annual energy bill of €410,000 (approx. US$515,000 ) by 17 percent. 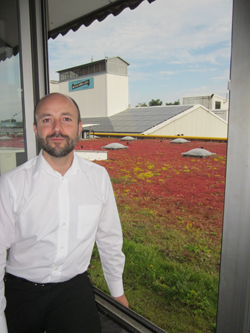 The U.S. House passed the "No More Solyndras Act" in late July. Here's what the National Venture Capital Association thinks of the measure.