xxon Mobil recently reported that its projected cost for building a liquefied natural gas project in Papua New Guinea had risen 20 percent to $19 billion due in part to disputes with landowners, as well as heavy rain and exchange-rate trends. The facility is due to ship its first LNG in 2014.

The U.K.’s Department of Energy and Climate Change issued new rules this month allowing for the resumption of fracking for oil and gas. “Shale gas represents a promising new potential energy resource for the U.K.,” said Energy and Climate Change Secretary Edward Davey. “It could contribute significantly to our energy security, reducing our reliance on imported gas, as we move to a low carbon economy.” 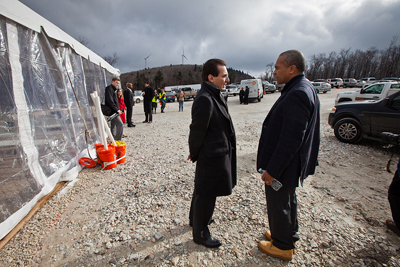 On Dec. 3, Massachusetts Gov. Deval Patrick (pictured) joined state energy officials to celebrate the near completion of the Hoosac Wind Power Project, the largest wind energy facility in both Massachusetts and Southern New England. Located in Florida and Monroe, the project includes 19 turbines made in the U.S that will work to produce enough electricity to power over 10,000 homes a year. The project will offset approximately 64 million pounds of carbon dioxide a year, relative to conventional electricity generation, the equivalent of taking over 20,000 cars off the road. The project will help Massachusetts meet its nation-leading greenhouse gas emission reduction targets as set in the Global Warming Solutions Act signed into law by Gov. Patrick in 2008. Hoosac spent $3.8 million dollars locally during construction and will generate approximately $6.8 million in tax revenue for the towns and another $3 million in lease payments to local landowners over the life of the project.

A new working paper from the American Council for an Energy-Efficient Economy suggests three possible tax policies that could spur substantial industrial investment in the U.S.

Iowa Gov. Terry Branstad in November applauded the federal government’s decision to uphold the Renewable Fuel Standard (RFS) and deny pending waiver requests. Iowa leads the nation in ethanol production, accounting for 25 percent of total U.S. ethanol production. “There is no question that this year’s drought caused hardships in the agriculture sector, particularly for the livestock producers,” said Branstad. “The EPA rightfully decided that the waivers were not an effective remedy to those hardships and would have instead injected unnecessary additional uncertainty into another component of the agriculture sector.”

In an illustration of a regional energy rush giving new life to moribund property, L.A.-based Hackman Capital early this month confirmed the purchase of the former Wheeling Corrugating plant in Beech Bottom, W. Va., from RG Steel, Wheeling, LLC. The firm is working in conjunction with The Business Development Corporation (BDC) of the Northern Panhandle, a non-profit which took title to the real estate following the auction of the real property and equipment, to develop and lease the site. RG Steel filed for Chapter 11 bankruptcy earlier this year. The site includes 600 total acres of land - 150 of which can be used for development - and sits in a prime location along the Ohio River. "This area of West Virginia has exploded economically in recent months due to new ways to drill for natural gas, so we believe we have an excellent opportunity to attract companies to the site," said Hackman, "We are hopeful this will bring many new jobs to the area."

Climate Policy Initiative (CPI) and the Center for Emerging Markets Solutions (CEMS) at the Indian School of Business (ISB) have found that high interest rates and relatively short term loans for renewable energy projects in India add 24 percent to 32 percent to the cost of renewable energy in India compared to similar projects in the U.S. and Europe. The national government has a goal to reach 4,000-10,000 MW of renewable energy by 2017 and 20,000 MW by 2022. Debt market issues make it more expensive for India to meet these goals.

The CPI-ISB Energy and Environment Program report, “Meeting India's Renewable Energy Targets: The Financing Challenge,” finds that even if the cost of debt goes down, issues with loan terms, access to low-cost equity, limits on foreign debt and national banking practices are likely to present additional barriers for growth in India's renewable energy sector in the medium and long term.

Royal Dutch Shell announced in early December it would move the headquarters of its integrated gas business to Singapore from Europe. The unit includes all of the company’s LNG and gas projects outside of North America. The news follows the November announcement that the company would expand by 20 percent the olefins and aromatics capacity of its ethylene cracker on the island. Dr Huck Poh, manufacturing director for Shell Singapore, underlined the significance of the cracker investment: “This project reinforces Shell’s commitment to Singapore, which is already our largest petrochemicals production and export centre in the Asia Pacific region.”

Singapore is the main centre for the Shell Group's petrochemicals operations in Asia Pacific.
Photo courtesy of Royal Dutch Shell

Frequent Site Selection contributor Charlotte Batson calls our attention to new research from MIT that says the amount of methane said to be produced from shale gas production is “exaggerated.”