Opportunities continue to multiply in Western Canada and beyond. 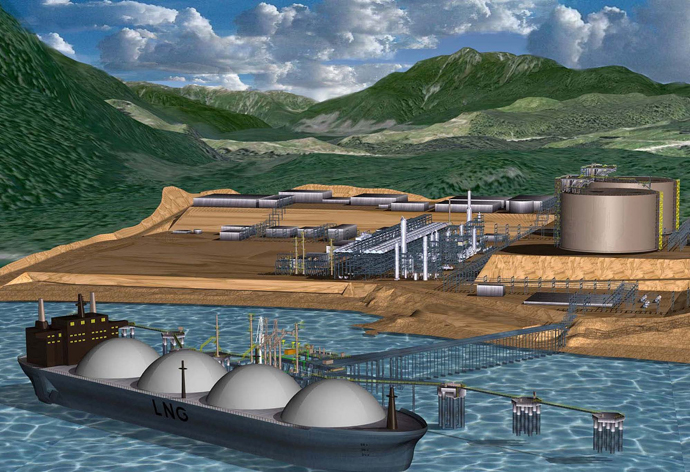 A rendering of the forthcoming Kitimat LNG export terminal project in British Columbia. The map below illustrates the LNG opportunity.
Images courtesy of BC LNG
by ADAM BRUNS
A 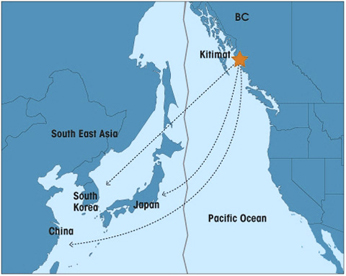 s the U.S. State Department works to conclude its review of TransCanada's resubmitted Keystone XL pipeline permit application by the first quarter of 2013, it's getting plenty of encouragement. The State of Nebraska is on the verge of completing its review of the revised pipeline route. And on Dec. 19, the National Association of Manufacturers, along with 152 of its closest business friends, sent President Barack Obama a letter urging him to "allow the U.S. Department of State to expeditiously move forward with the remaining regulatory process and approve the construction of Keystone XL."

As that process continues, other processes do too, notably involving LNG export terminals in Kitimat, B.C., land of the Haisla First Nation, as well as home to a 60-year-old smelter operated by Rio Tinto Alcan that is currently receiving a $3.3-billion modernization investment.

The LNG projects are driven by one salient fact: Increasing shale-gas supply in North America resulted in prices around US$2 in September 2012 for 1,000 cubic feet of gas, versus the long-term forecast of $14 to $16 in Asia.

BC LNG, jointly owned by the Haisla Nation and LNG Partners LLC of Houston, Texas, expects to export its first shipment of LNG early in 2014 after receiving a 20-year LNG export license from Canada's National Energy Board last February. The Kitimat LNG project and associated pipeline involved an investment of between $5 billion and $7 billion, and a lease of Haisla land for the terminal that was approved by the band in 2010. The terminal got its 20-year license in October 2011. Its partners include Apache Canada, EOG Resources Canada and Calgary-based Encana Corp.

But Encana's interest in Asia goes beyond end users, right to investors. And it involves oil as well as gas. In December, the company announced it was entering into a JV with Phoenix Duvernay Gas, a wholly owned subsidiary of PetroChina, to explore and develop Encana's extensive undeveloped Duvernay land holdings in west-central Alberta. Phoenix will gain a non-controlling 49.9-percent interest in Encana's approximately 445,000 acres in the Duvernay play for total consideration of C$2.18 billion. The partners plan to invest a total of C$4 billion in new drilling, completion and processing facilities. Encana estimates that the Duvernay joint venture lands contain about 9 billion barrels of oil equivalent petroleum initially-in-place.

"These relationships have the potential to increase natural gas demand as a number of Encana's partners are actively exploring opportunities to export liquefied natural gas (LNG), while some are industrial consumers looking to transition to natural gas as fuel for their operations," said an Encana release. "An example is a recent agreement with Nucor Energy Holdings (Nucor) which is designed to support Nucor's increased use of natural gas for its facilities, such as its direct reduced iron facility currently under construction in Convent, Louisiana."

The U.S. Energy Information Administration released a preview of its 2013 Energy Outlook projections in early December. It foresees a decline in energy imports reflecting increased domestic petroleum and natural gas production, increased use of biofuels (much of which are produced domestically), and demand reductions resulting from rising energy prices and the adoption of new efficiency standards for vehicles. The report calls for the net import share of total U.S. energy consumption to be a mere 9 percent in 2040, compared with 19 percent in 2011 (the share was 30 percent in 2005).

In addition to calling for higher domestic crude oil production (from 5.7 million bpd in 2011 to 7.5 million bpd in 2019), the EIA outlook calls for more offshore natural gas production after 2015, and says the United States will become a net exporter of LNG starting in 2016, and an overall net exporter of natural gas by 2020 — two years earlier than the EIA's previous report had projected. Who will get it? The report expects net pipeline exports to Mexico to grow by 387 percent by 2040. 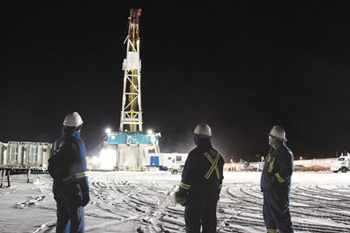 Arthur P. Hall, founding executive director of the Center for Applied Economics at the University of Kansas School of Business, formerly served as chief economist in the public affairs group for Wichita-based industrial conglomerate Koch Industries, and before that he served as senior economist for the Washington, D.C.-based Tax Foundation. In an interview with Site Selection featured in the magazine's forthcoming January issue, he says if the unconventional plays play out, the U.S. and Canada are going to have a competitive advantage for 10 to 20 years.

Hall just co-authored a comprehensive report on his state's oil and gas resources. He says unconventional plays such as those being explored in Kansas will help the U.S. become a low-cost energy source, and "will start to have an impact on manufacturing site location."

For more on the oil, gas and coal economy in NAFTA, see the forthcoming January 2013 issue of Site Selection magazine.